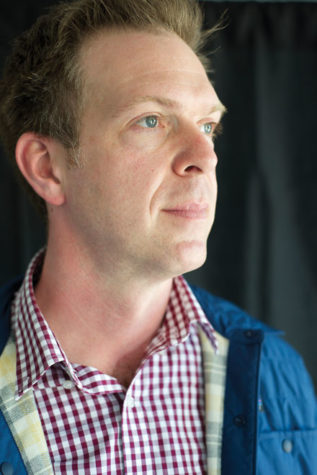 Chris Thompson of Thompson’s Point Development Company has developed several hotel and mixed-use projects in New England, including Thompson’s Point in Portland and a 93-room Hampton Inn in Lewiston. Thompson is an associate professor at the Maine College of Art.

Thompson’s Point—across the Presumpscot River from the Portland International Jetport— seemed underutilized for years. What caused you to become interested?

It’s a 30-acre peninsula with water on all sides, interstate 295 runs right next to it, and the Portland Transportation Center is just across the tracks—it’s an extraordinary piece of land. You could search the world for something with that much in potential. It was a really challenging site to pull all the pieces together, but we’ve been at it for about six years.

What was it used for previously?

It was an old rail yard, and all the buildings were positioned so that trains could move through them. There was this spider web of tracks leading in and out of buildings. There’s still a couple of pieces left that we’re trying to bring back to life. Then there’s a piece that for a long time was covered with corrugated metal and plywood and surrounded with debris. When we stripped all the junk off the outside of that building, we found an extraordinary old steel structure that was part of the old Union Station from St. John Street. We restored that, rebuilt the structure, and put in a new slab and a roof.

Why did you decide that this land would be a good place for a mixed-use project?

Thompson’s Point Development Company’s key focus for the last 10 to 15 years has been hospitality, hotel development, and management. A lot of our projects are mixed- used projects that have both a hotel and hospitality component. We love the business of welcoming and greeting, making sure people have a great experience, whether it’s in a hotel or in a larger project as a whole.

What types of creative endeavors are now at Thompson’s Point?

We have this great project called Open Bench, which Jake Ryan, a builder and educator, put together. It’s a membership structure that gives makers of all kinds a facility that they can use and share. They have access to private workspaces, shared equipment, and great programming. We also collaborated with Lauren Wayne at the State Theatre to create an outdoor concert series that went live this summer. Also, last summer, the Circus Conservatory of America hosted the American Youth Circus Festival, which brought together 400 gifted young circus folks from all over the country.

You are a professor at the Maine College of Art, and you have a PhD in cultural history from the University of London. It’s interesting that you have incorporated your art background into real estate.

My stepfather was a developer. We were fortunately able to work together for a number of years before he died. I learned early on how real estate development, and entrepreneurship in general, is a creative practice. You’ve got to be able to change and rethink and respond to changing conditions in the world like art makers do. As a professor at MECA, I learned how truly creative art students and artists are. They look at history differently than a trained historian. They look at entrepreneurship differently than a businessperson. The history of real estate and the history of art are really one in the same. You take all the great places in the world that became cool, like SoHo in New York, and these were where creative work initially found a home. For us, how we think about the creative culture as part of the fabric of the project right from the beginning has been really key.