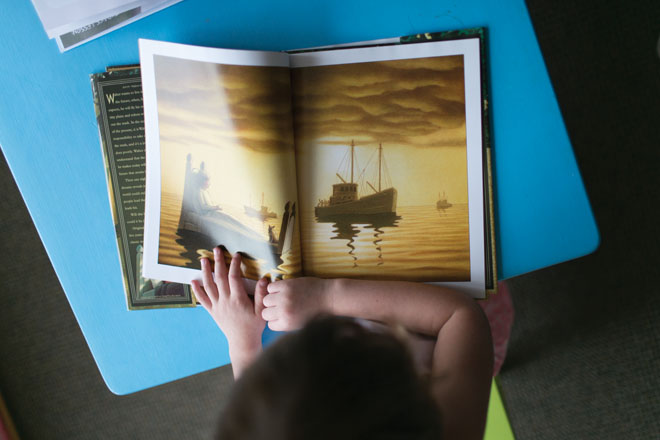 At the CTL books are the major expenditure. A prolific reader herself, Atwell especially enjoys British literature and makes regular trips to London with her husband, Toby McLeod, where they make a point of seeing as many plays as possible. 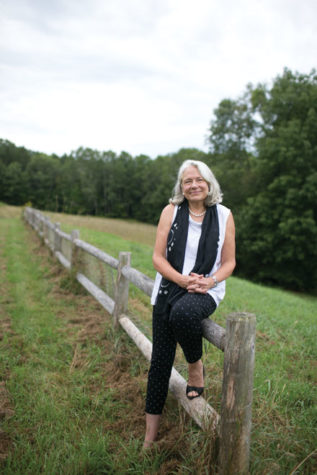 Nancie Atwell in Edgecomb, at the Center for Teaching and Learning (CTL), the demonstration school she founded in 1990. 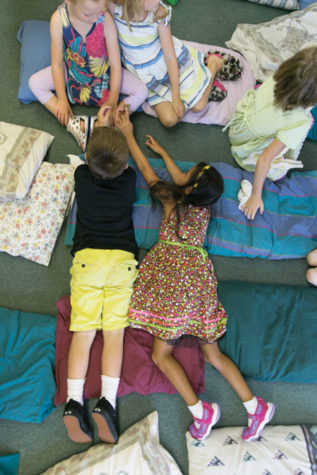 Every morning the students gather for an all-school meeting, which incorporates poetry and singing. Here, a group catches up before finding a seat on a pillow and dialing in to what Atwell has to say. 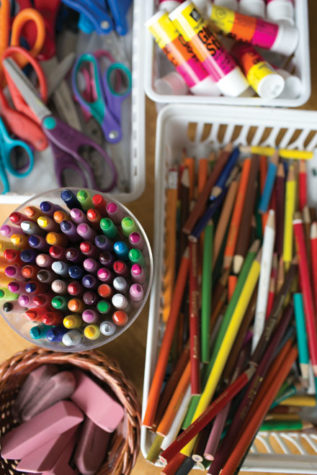 Raw materials for an authentic education include art supplies and books. 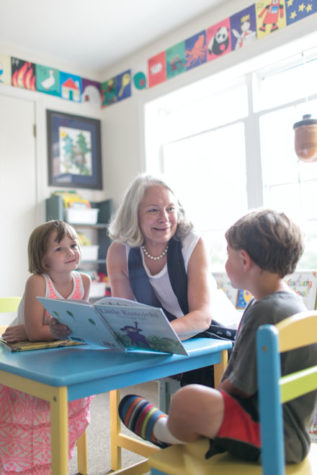 One summer day in 1975, a young couple parked at Hendricks Head Beach on Southport. It was a quiet, narrow stretch of sand with large dark rocks rising up from the water. To the right, an arm of land curved protectively around the inlet. They admired its lighthouse. They scanned the maps in front of them to determine exactly where they’d landed, their mood tempered by the fact that it was their last day of vacation in Maine. They started wondering out loud what they could do for work if they moved to the Boothbay region, and Toby McLeod, who was finishing his PhD, reminded his wife, “You’re a teacher. You can work anywhere. Put in an application.”

Before returning to Buffalo, New York, Nancie Atwell dropped off an application with the local superintendent. As it turned out, the seventh and eighth grade English teacher—Atwell’s exact position at a school in New York— had quit the week before.

Atwell didn’t get the job; she had said she wouldn’t teach grammar. But when the teacher they did hire saw the classroom— which had a toilet in the corner prone to overflowing and a jerry-rigged plywood wall prone to falling—she got cold feet. The superintendent called Atwell two days before school started and said, “Are you still interested?” The couple had no idea where they would live. It would mean a significant cut in her salary, and McLeod didn’t have any job prospects. But it would also mean a life in Maine, so they put a new tailpipe on their old car and drove overnight to Boothbay Harbor.

Forty years later, at the Center for Teaching and Learning in Edgecomb—the school that Atwell founded in 1990—she says, “I never looked back. So much of what I’ve been able to do is because I’m here, because Maine—” she pauses. She smiles over her cup of tea. “I don’t know if it invites it, forces you into it, or permits it, but Maine is a place for entrepreneurship and innovation. Here, I could imagine different ways of teaching.”

Atwell didn’t set out to be a teacher. In fact, as a kid she never enjoyed school or even considered college. “In the end,” she says, “I scored high enough on New York’s Regents Exam and my parents’ income was low enough—my dad was a mailman and my mom a waitress—that I qualified for a full ride to any state university, so I applied to Buffalo State.” She loved college. She loved the autonomy, the opportunity to choose classes based on the books she wanted to read. Atwell majored in English and, not quite sure what her next step would be, decided to stick around for a semester of student teaching. “The first day I took over a classroom I knew I was home,” she says. “I thought, you could spend your life doing this, talking about novels and poems and plays with young people. I could imagine a career of incredible satisfaction.”

In Boothbay Harbor, where she worked from 1975 to 1986, Atwell started pushing the boundaries of what an English classroom could be, eventually dividing class time into what she called “writing workshop” and “reading workshop.” The period began with a mini-lesson in a particular literary genre, such as poetry, advocacy journalism, or parody, or with “book talks” about recommended titles from her classroom library. Students spent the remainder of the time producing pieces of writing on topics of their choosing (in writing workshop) and reading books of their choosing (in reading workshop), while Atwell moved among them, engaging students in the teaching conversations she calls conferences. On average, her seventh- and eighth-grade students read 40 books a year. They drafted, revised, and completed 25 pieces of writing. “This writing was self- expression,” she explains, “but not indulged self-expression. I had lessons to convey to them and robust expectations that their writing read as literature and serve real purposes.”

Atwell was blown away by the quality of the work her students were producing. She started writing articles about what she was doing in the classroom and speaking at conferences, and began work on the book In the Middle: Writing, Reading, and Learning with Adolescents, which came out in 1987, right around the time her daughter, Anne, was born. In the Middle, described by literacy scholar Thomas Newkirk as “the greatest book on literacy teaching ever written in this country,” has sold over half a million copies, and is now in its third edition. She is the first classroom teacher to receive the major research awards in the language arts, and has gone on to write twelve other titles, including The Reading Zone and Naming the World: A Year of Poems and Lessons. Following the success of In the Middle, Atwell began traveling the country, promoting the workshop model, but she missed working with kids. In the late eighties, an idea started percolating: “What if I created a school that teachers could come to? Where they could live in the environment for a week at a time and soak up what happened there?” Out of this concept the Center for Teaching and Learning was born.

For each year of the past 25, the demonstration school has educated about 80 students in grades K-8 as well as teachers from across the country. In an effort to assemble a student body that resembles a typical public elementary school, tuition is about a third of what it is at comparable independent schools in Maine, and CTL offers generous tuition assistance depending on need. The workshop model is tailored to every subject. Regardless of content, “The work that children do is authentic,” says Atwell. “It’s a version of what adults do when they engage as mathematicians, writers, artists. There are no kiddie versions, plus there are no worksheets or workbooks. Students create products, and something happens with them. If it’s writing it gets published, if it’s research it gets presented. These kids discover and pursue their intentions as learners. The work they do here is rigorous, and joyful.”

In March of this year, at an awards ceremony in Dubai, on a stage with former president Bill Clinton and nine other finalists from around the world, Nancie Atwell of Southport, Maine, became the inaugural recipient of the Global Teacher Prize. She donated every cent of the Varkey Foundation’s one million dollar award— which has been called the “Nobel Prize for teaching”—to the Center for Teaching nd Learning. “I have everything I need,” she says. “But this school doesn’t. These kids don’t.” The school will receive $100,000 a year for the next ten years; it gave away its first installment in tuition assistance. As Atwell says this, her relief is palpable. “The kids who we were worried about?” She shakes her head. “No longer. Everyone will be able to stay here until eighth grade.”

As independent reading is sacrificed to the Common Core curriculum, as programs-in-a-box and software become the norm, Atwell is using her status to promote real reading and writing at events like the Clinton Global Initiative at the end of September. “I think there should be a global initiative to put sturdy bookshelves and enticing books in every classroom in the world,” she says. “Because it’s going to increase reading achievement, but also because it’s going to increase people’s humanity.”

On a rainy September day in Edgecomb, in the seventh- and eighth-grade reading class now taught by Atwell’s daughter, Anne Atwell Merkel, students are nestled into bean bags with books propped against their stomachs. There is something wonderfully unselfconscious in their droopy poses, in their wide-eyed, slack- jawed faces: they have left this world for another one. They are learning what it is to be human and becoming better readers at the same time. Merkel makes her way from student to student. She remembers where in their stories they were yesterday, and she listens while they tell her what they think about what has happened since. Atwell looks on from the edge of the classroom. Taped up behind her is a poster with a quote attributed to Virginia Woolf: “Literature is no one’s private ground, literature is common ground. Let us trespass freely and fearlessly and find our own way for ourselves.” On behalf of these wide-eyed, slack-jawed learners, thank goodness Nancie Atwell found her way here.