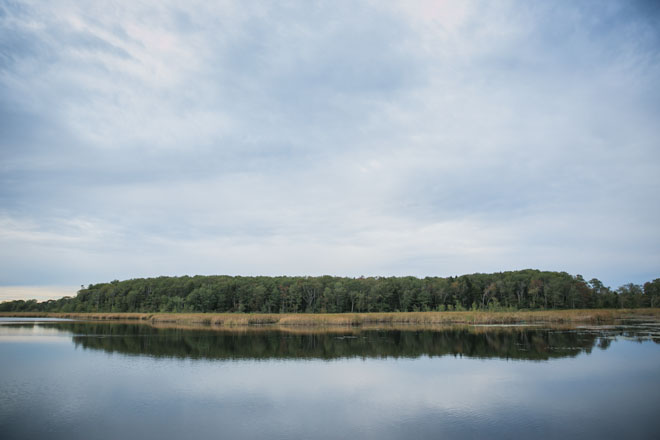 Cape Elizabeths Great Pond has been a public gathering place for many years. According to Franklin, around the turn of the century, the towns winter carnival saw as many as 200 teams of horses gathered for races across the pond. 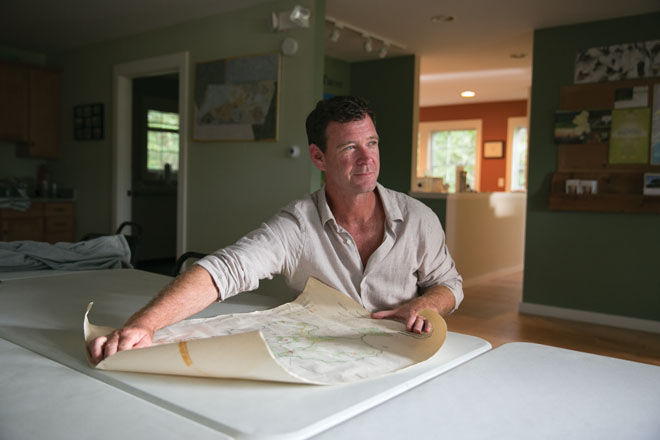 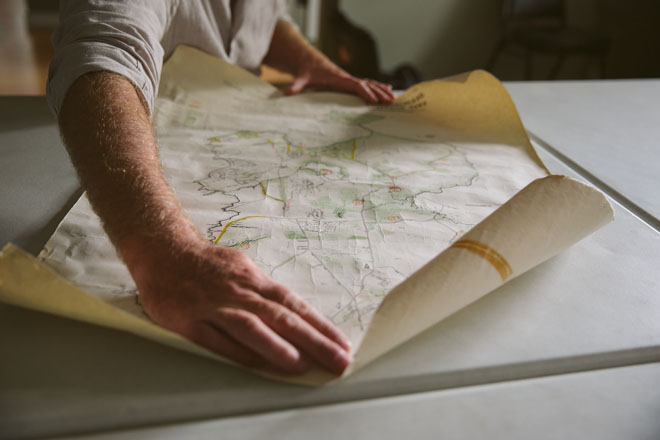 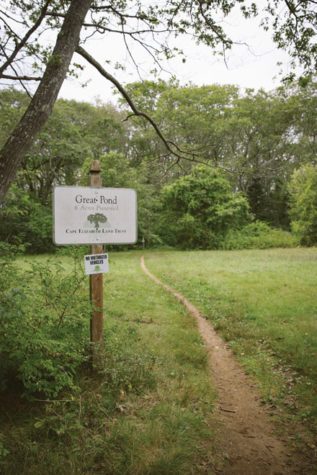 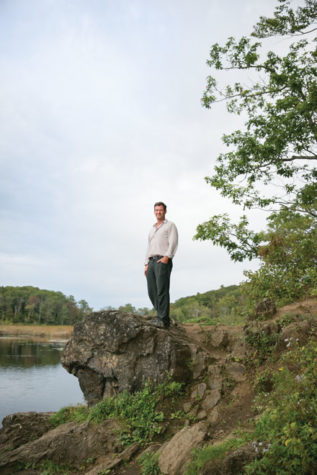 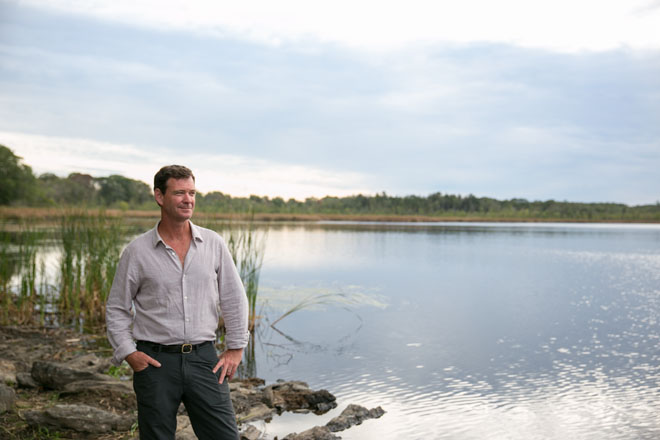 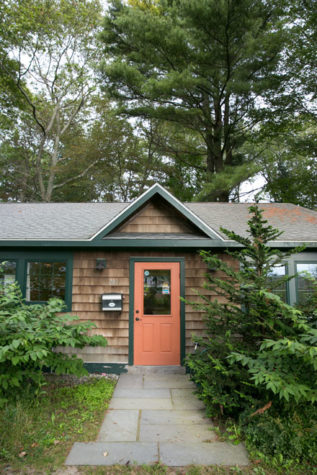 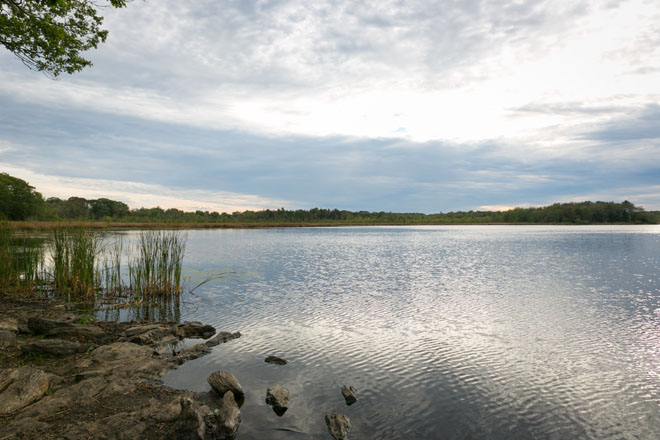 The Quiet Stories of the Cape Elizabeth Land Trust

A Walk in the Woods with CELTs Longtime Executive Director Chris Franklin.

On Ocean House Road, tucked behind a row of trees, the Cape Elizabeth Land Trust headquarters are easy to miss.

The former garage is covered in brown shingles. The windows are trimmed in army green. Later it will occur to me that this camouflage speaks to the organization’s mission, but on the afternoon of my meeting with former executive director Chris Franklin, I’m just frustrated by my inability to locate the building. I end up pulling into the lot of the nearby strip mall, calling the Cape Elizabeth Land Trust phone line, and explaining to a patient Franklin that I’m lost. He assures me that I’m not, that I’m merely across the street. I narrow my eyes as if attempting to locate a bird in a thicket of trees.

The unflappable Franklin greets me in a beige linen shirt and green pants that match the building. He looks weatherproof, durable. His skin has a vaguely leathery quality, implying long days spent outside. A large conference table consumes much of the building’s interior, which makes sense given that CELT is governed by an all-volunteer board of directors with only two full-time employees on staff. This sizable table is also good for unfurling the large maps that Franklin spent a great deal of time creating and poring over during his 12-year tenure as CELT’s executive director. Some of the maps in CELT’s collection are several decades old, drawn with colored pencils and a remarkably steady hand. Franklin’s are made on a computer, which means they can be regularly updated as new habitat data comes in, or as property lines change. If you know how to read them, maps tell stories of the places they depict. In knowing these maps, Franklin knows the stories of Cape Elizabeth inside and out.

Just south of Portland, Cape Elizabeth spans about 9,000 acres of farmland and forest edged in epic rock formations and beaches. With the longest growing season in Maine, the area’s agricultural history dates back to the 1600s. As recently as the 1960s, Cape Elizabeth was home to some 50 family farms, but around that time the national trend toward suburbanization nudged people out of Portland and into the surrounding towns. Large parcels of inherited land were divided and developed, rapidly changing the look and feel of the pastoral Cape.

As this was going on, in 1962, longtime Maine resident Rachel Carson’s Silent Spring was published, helping to bring new attention to the conservation movement in the United States, and to launch the modern environmental movement, which led to the creation of the Environmental Protection Agency in 1970. Despite critical federal legislation and the formation of progressive nonprofits like Friends of the Earth, more was needed to combat unfettered development. On the local level, concerned citizens across the country started forming land trusts in the early 1980s. In 1985, a group of Cape residents formed one of Maine’s first dozen land trusts. (Now there are more than 80.) Over the past 30 years, CELT has preserved 650 acres of land on 29 separate parcels. If not for the group’s efforts, Cape Elizabeth would be a very different place than it is today. What so many of us take for granted—local land conservation—might never have been.

Land trusts have been remarkably successful, but despite his proactive approach, Franklin tells me that this work can feel slow-going at times—if you do the math, the tireless efforts of those at CELT have resulted in about one land deal per year, each the result of several years spent building relationships and negotiating terms. He believes in collaborative solutions, but like many in the field, he also believes that this work is urgent and that too much patience can be detrimental to the conservation movement. In the history of the planet, 50 years is a flash in the pan—and in most suburban parts of the country, 50 years is about all the time we’ve got to get this done right. “While it will vary from region to region it’s not unreasonable to think that within the next few decades the majority of local land conservation will have taken place—there just aren’t that many places left in many towns,” says Franklin. “This adds a great urgency to our work but also lends a certain excitement to the fact that we are the generation that gets to do this work.”

It is fitting that outdoorsy, Lincoln, Massachusetts-born-and-bred Franklin grew up in tandem with the conservation movement, a cause he academically aligned with as an environmental conservation and geography major at the University of Colorado at Boulder. Like a lot of East Coast kids who love the outdoors, Franklin took off for the West as soon as he could, and fell for the vast wilderness he found there. In 1994, he moved to San Francisco to work at the Earth Island Institute as David Brower’s personal assistant. From 1952 until 1969, Brower served as the first executive director of the Sierra Club, and he later went on to found environmental organizations such as Friends of the Earth and the League of Conservation Voters. This apprenticeship with one of the most influential environmentalists of the twentieth century was life-changing for Franklin, who still abides by many of Brower’s principles. Franklin met his wife, Julie, in San Francisco, but their families were both on the East Coast, and, after a couple detours, in 2000 they decided to make a move to Maine—the East Coast state rife with bold landscapes that could match the grandeur of the West.

Outside CELT’s office building, Franklin loosens up, although his tone remains quiet and contemplative. We drive a couple of miles to the parking lot of the Kettle Cove Creamery and Cafe, closed until summer, and make our way down a discreet path through what seem like people’s backyards. Soon the residential neighborhood gives way to thick growth, wider dirt paths, and canopies of trees. Boys from the cross-country team pass us in pairs and we’re joined by a woman walking her dogs. It doesn’t take long to reach our destination: Great Pond. If you’ve never been to Great Pond, go. On the afternoon of our visit it’s utterly, gorgeously still. Trees surround the periphery. Grasses puncture the surface of the water.

As we continue on to the new stone staircase that leads to a raised wooden trail through marsh, Franklin elaborates on the manifold mission of CELT, which, in addition to preservation, devotes itself to stewardship of the protected land. For the past 12 years, Franklin has regularly visited these diverse properties, overseen their upkeep alongside CELT’s substantial network of volunteers. The trust has also collaborated with teachers and administrators at the local public school to co-develop a curriculum that gets students outside. As he talks, he walks with his hands in his pockets, looking deferentially up into the trees from time to time, tapping stones with his foot to make sure they’re secure. At one point he wonders out loud about whether or not a gnarly fence dividing private property from public might be replaced with something more discreet or removed altogether. Soon he will step down from his post as executive director, but he’s encouraged to know that the person to follow in his footsteps will be in good hands with the extraordinarily active and devoted board of directors.

We have a difficult time deciding where to go next. There’s Robinson Woods I and II—a 145-acre sanctuary realized through the generosity of a family with deep Cape Elizabeth roots, local fundraising, and the support of the town. He mentions Trundy Point, a spectacular spit of rock to the north. In the end, we decide to visit W. H. Jordan Farm. In 2003, through a variety of grants and local donations, CELT helped to protect 47 acres of farmland from development, with provisions to maintain the land for agricultural use.

We make it to the property just as the sun is setting. Standing beside a sun-faded Cape Elizabeth Land Trust sign, we look out over undulating fields rowed with vegetables and dotted with farming equipment to be put to use in the morning. It occurs to me that just 50 years ago, most of Cape Elizabeth looked this way. Thanks to the concerted efforts of Chris Franklin and others at CELT, this special part of Maine has retained much of its agricultural character, and all of us have access to vast public woods and stretches of coastline that might otherwise have been swallowed by development. Cape Elizabeth Land Trust’s work over the last 30 years has become an important part of the town’s legacy. “These are really quiet stories,” Franklin says, “but they impact the health of our community and, as my friend Dave Brower said, they ‘show that this generation had a love for the next.’”