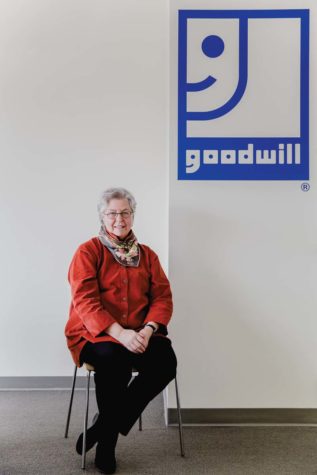 Anna Eleanor Roosevelt is the CEO of Portland-based Goodwill Industries of Northern New England. Formerly vice president of global corporate citizenship at The Boeing Company, Roosevelt came to Goodwill NNE in 2011. Her reasons for moving to Maine included the natural beauty and a home closer to two of her five grandchildren, but just as important was that she saw a commitment to shared dignity at Goodwill NNE. The organization, with 30 stores in Maine, New Hampshire, and Vermont, delivers a variety of services to help people find stability through work. In 2014, Goodwill NNE’s workforce services helped more than 32,000 individuals. To help with the organization’s ten-year goal of moving 10,000 households into stability, Roosevelt says businesses should think about how to include a diversity of talents in their workplaces and realize that building stability can take practice. “Take a chance on someone and stick with them,” she says. “Commit to making that slight mental shift from being so narrowly focused on getting a particular job done in a particular way, to being more broadly focused on getting the job done by hiring an individual whom we might otherwise overlook.” Roosevelt has a family history of public service: she is the granddaughter of President Franklin D. Roosevelt and First Lady Eleanor Roosevelt, and is the chair of the Roosevelt Institute Board of Directors.