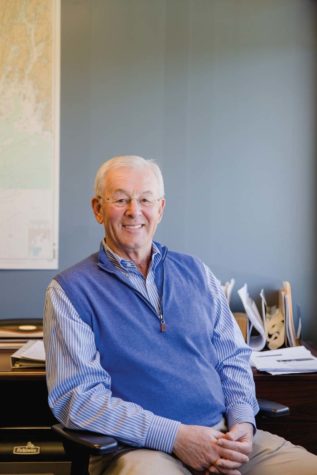 After 21 years with Dead River, Bob Moore is retiring as CEO of the heating fuel company. Moore says he stayed at the South Portland- based Dead River for more than two decades because the company and its 1,200 employees believe in core values of integrity, caring, and excellence. “This is a dynamic business that is constantly affected by outside forces over which we have no control,” he says. “With the help of an exemplary team, I’m proud of keeping the company strong and allowing it to grow and meet the ever-evolving needs of our customers.” Moore, who grew up in Portland and Cumberland, spent four years as a jet pilot in the U.S. Navy before going to the University of Maine School of Law. Moore worked as a partner at Verrill Dana and Pierce Atwood. He also served as counsel to former Governor John R. McKernan. “Serving in state government was a privilege,” he says. “Knowing that I worked every day for the people of Maine meant a great deal.” In 2013, Good Shepherd Food Bank honored Moore and Dead River with the JoAnn Pike Humanitarian Award, and the Boy Scouts of America’s Pine Tree Council presented Moore with its Distinguished Citizen Award. Last year, Junior Achievement of Maine elected Moore to the Maine Business Hall of Fame. “I love this state, so everything I’ve done and continue to do stems from that,” he says.