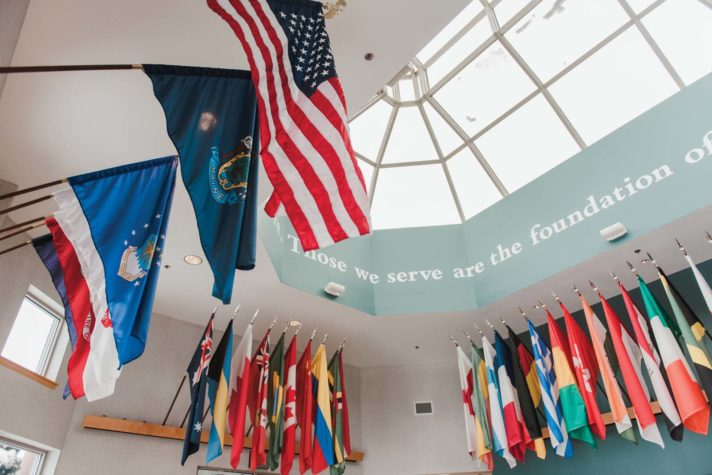 The Hall of Flags has flags representing the home countries of all the students who have attended the college. 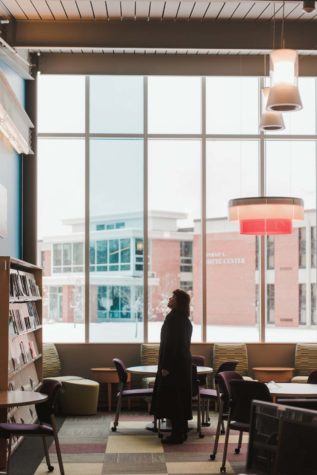 Lachance in the Kenneth and Eva Green Library. 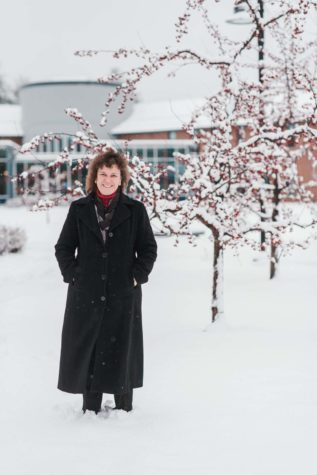 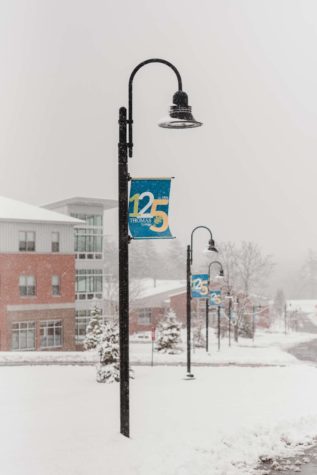 Thomas College’s 120-acre campus is located along the Kennebec River in Waterville.

At Thomas College, Laurie Lachance combines her experience as a first-generation college student and her decades as an economist to help students succeed

When Laurie Lachance was growing up in Dover-Foxcroft, her mother, Mattie Gagnon, used to do their family budgeting at a desk in the corner of the dining room. She would take out a small red box with nine smaller boxes inside. After cashing her husband’s paycheck from his job as a grocery store manager, Mattie would put money in each of the labeled boxes: oil, mortgage, groceries, clothing, and so on. Neither Mattie nor her husband, George, went to college, but they dedicated one box as a college fund for Laurie and her two sisters.

“There were times growing up that she’d only put in a quarter or whatever they had, but money went into that little box every time a paycheck came in. Then she’d deposit it in the bank for us,” Lachance says. “We didn’t have much saved, but it was very intentional, and it was an expectation. All of us went to college.”

Now, as president of Thomas College, Lachance is serving a similar cohort. Nearly two-thirds of students at Thomas are first-generation college students, who typically face greater challenges— financial, academic, or social—in completing college. As Lachance knows first-hand, the transition to college can be especially jarring for students who don’t come from a background with college education.

When Lachance enrolled at Bowdoin College in 1979, the Brunswick school had admitted its first class with women less than a decade earlier, and the amount of wealth present was staggering for someone from rural Maine. Even the other students’ clothing, such polo shirts with the Izod Lacoste alligator logo, seemed foreign to Lachance. (“Never seen a shirt like that. Never owned one. Wouldn’t even know where to buy one,” she says.) The biggest culture shock came in her first week. The college didn’t have sororities, so fraternities were forced to welcome women as members. While Bowdoin no longer allows fraternities, when Lachance enrolled, orientation week was also fraternity rush week. After workshops and tours during the day, students visited various fraternities during the evening, and by the end of the week students were either invited to join a fraternity or not. “It was an extremely painful way to start college, feeling like you’re either in or out based on your looks, clothing, the stature of your high school, or your family’s income,” Lachance says. “It had a profound impact on me.”

Lachance eventually found her place at Bowdoin. She joined the swing band and ended up becoming its director. She played on the varsity basketball team for three years. She’s grateful for her education from Bowdoin and the opportunities it provided her, and she has high praise for the college now—her oldest son graduated from Bowdoin five years ago—but she still remembers that “profound sense of not belonging” during her first two years of college.

When Thomas College hired Laurie Lachance, she lacked the expected pedigree of a college president. The vast majority of college presidents are hired through academia—most have never even worked outside of education, according to a 2016 American Council on Education study. Lachance had never worked in education before, but she had earned her MBA from Thomas College and was serving on its board of trustees when the school began its search for a new president in 2012. During the process, Lachance’s name came up as a possible candidate, and the board asked if she would consider applying. Lachance had spent the previous three decades studying Maine’s economy, first as an economist for Central Maine Power Company (CMP), then as Maine’s state economist, and later as president and CEO of Maine Development Foundation. “There is nothing in my resume that says, ‘That woman should be a college president,’” Lachance says.

But Lachance understood the impact of education on the state’s economy. She was drawn to the fact that many of Thomas College’s students are from Maine and end up working in the state. “You don’t have to bribe them and convince them [to stay],” she says. “They want to be in Maine. They want to make a good living for themselves back in their hometowns.”

Lachance’s initiatives at Thomas College reflect her experiences as an economist and a first-generation college student. One of her first projects was to knock down walls—literally. When she first arrived, the president’s office was located down a winding hallway off of a second-floor lobby in an administration building. “Nobody knew where the president’s office was,” Lachance says. “You couldn’t see it. You wouldn’t know if there was anybody in there.” Her first summer there, she had a concrete wall knocked down and glass doors installed so students and faculty can see when she’s in her office. She also adopted a practice from Bowdoin College: Lachance invites all first-year students during their first week to meet her and sign a matriculation book.

Much of Lachance’s work at Thomas College is centered around reducing barriers for students, especially first-generation college students, helping them stay on track and succeed after graduation. The college recently received a grant from the Davis Foundation to redesign core courses so students in entry-level classes can use free online resources in place of costly textbooks. The college’s goal is to eventually apply this to as many courses as possible.

Other initiatives seem less intuitive: Lachance started a program that allows seniors and graduate students to take a free six-week class on golf. Students learn how to play, proper etiquette, and how to network on the golf course. Lachance, who discovered the career benefits of being able to golf while at CMP, says students who take the class are able to join colleagues on golf outings and corporate-sponsored golf tournaments, accessing networking opportunities that they wouldn’t otherwise be able to.

Recently, the college launched the first varsity-level esports team in Maine (“another thing where people are rolling their eyes,” Lachance says) with funding from Bill and Joan Alfond. The team will compete in regional and national esports competitions (essentially, organized video game tournaments) starting this spring. The reasoning behind the program is multifold. Varsity athletes at Thomas College are 10 percent more likely to graduate than nonathletes, and by creating a varsity esports team, the college provides a new group of students with the opportunity to engage more deeply with the college and do something they love. Students will also have a coach to mentor and guide them. “There’s planning and critical thinking skills: all the things we know they need to get a job in the world. They’ve got to be able to talk with people,” Lachance says. “We’re going to give them these skills. They may not realize it, but that’s what we’re going to do.”

Attracting more students and creating systems to help them succeed are key to Thomas College’s five-year goal of increasing its enrollment from just under 800 full-time undergraduates to 1,000. A larger student base is needed to better cover the college’s overhead costs and to lessen the burden of student tuition, Lachance says. But in a state and region with a rapidly aging population, drawing college students from a shrinking pool is not an easy task. Higher-education institutions across the nation are facing similar challenges and are expecting a significant drop in high school graduates after 2025. “The fact that we’ve been able to grow at all over the years, and even maintain some years, is somewhat miraculous,” Lachance says, “but the only way to do that is to steal market share from someone else, because the demographics are pummeling us in Maine. It’s just pummeling us.”

Although Thomas College’s tuition is more expensive than state schools, such as the University of Maine, it positions itself as a good value through scholarships and what Lachance calls its “suite of guarantees.” Its most well-known is the job guarantee: If students in the program don’t have a job six months after graduation, the college will pay the students’ federally subsidized loans for up to 12 months, or offer up to six graduate courses for free. Students must fulfill certain requirements, including meeting with an advisor and maintaining a 3.0 GPA, but since implementing the program in 1999, the college has only had to pay a handful of times, Lachance says. Last year the college had a 98-percent job-placement rate. Thomas College also guarantees students will graduate in four years if they follow the college’s program.

From Lachance’s own experience, she knows that barriers to reaching a college degree can be daunting for first-generation students, and that they can go deeper than just money. “It’s the barriers that are here that are the biggest barriers,” Lachance says, tapping her temple. “If we can break down those by having a glass wall, meeting them on the first day, understanding they belong here, they’ll succeed here,” she continues. “It’s just made me so sensitive to those things that, if you’ve never been through it, if you’ve never felt unwelcomed or unworthy, how would you really understand what they’re feeling?” 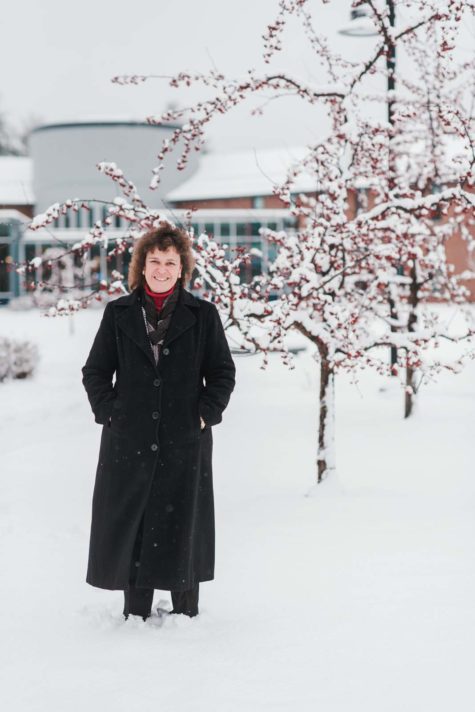