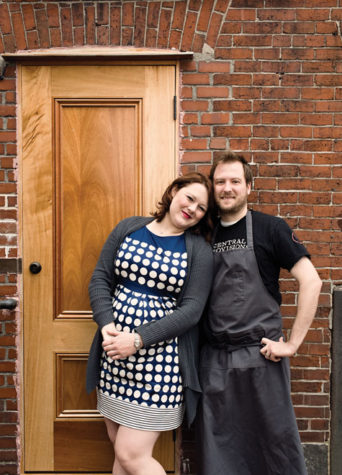 Chris and Paige Gould, the husband and wife team that operates Central Provisions in Portland, started working in restaurants at the age of 15 and both knew right away it was what they wanted to do forever. “It is a very challenging industry,” says Paige. “But when you have a customer pull you aside and say things such as ‘That was the best meal I have ever eaten’ or ‘You made me realize that I have been eating wrong my whole life’—that’s what it is all about.” Chris was formerly the sous chef at Coppa and the chef de cuisine at Uni Sashimi Bar, and Paige was a cook at Clio and Toro, all in Boston. Chris grew up in Bethel and the couple had been visiting Portland’s thriving food scene for years, so moving north seemed like the right fit. In the winter of 2014, they opened Central Provisions in the heart of the Old Port. In their first year, they were hugely successful. They were warmly greeted by the neighborhood, busy every night and, to the couple’s surprise, they were nominated by the James Beard Foundation for Best New Restaurant. “We never dreamed that we would be so well received,” says Paige. Chris and Paige are hard at work in their restaurant, but still participate in charity events that support the community that welcomed them, such as Good Shepherd Food Bank, Cooking Matters Maine, and the Portland Symphony Orchestra.