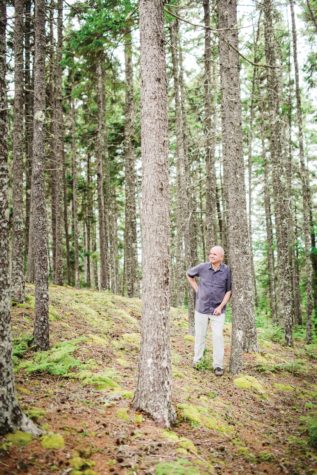 David Edson began his career at Sewall in 1974 as a forest technician, later becoming executive vice president and eventually president and CEO. The engineering and forestry consulting company has served Maine clients since 1880 and now serves clients worldwide. In Maine, Sewall contributed to the establishment of the Certified Logging Professional program, an effort by the Maine Forest Products Council and others to create a safety program for loggers that has saved lives and helped sustain a viable logging force in Maine’s timberlands. The company also helped pioneer the introduction of geospatial sciences into sustainable forest management and community governance. Edson says effective forestry management requires using metrics to anticipate the impacts of change, either taking advantage of positive developments or mitigating challenges, like insects or climate change. One of his favorite projects has been assessing the impact of the spruce budworm onMaine’s forests. During the last outbreak in the 1970s and 1980s, the insect killed between 20 and 25 million cords of spruce and fir, resulting in hundreds of millions of dollars in lost revenue for theforestry industry, according to a 2016 report on how the state is preparing for the next infestation. “This time we are better prepared,” he says. Edson has served on the boards of the Maine Tree Foundation and Maine Forest Products Council, and as president of the Maine Forest and Logging Museum. He currently serves on the MDI Advisory Committee for Maine Coast Heritage Trust and is a board member of Friends of Acadia. “For me, Maine is home, professionally, culturally,and emotionally,” Edson says. “Maine is a brand that warrants respect and value nationally and internationally.”