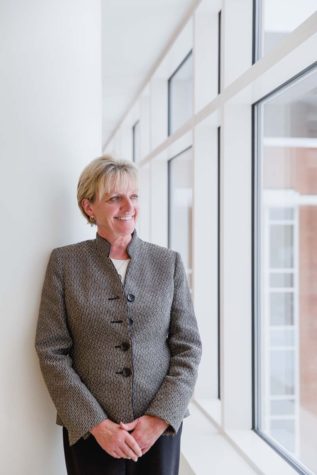 Deborah Carey Johnson, RN, president and CEO of Eastern Maine Medical Center, has been with
the hospital for over four decades, beginning as a nurse and working her way up to president and CEO in 2004. A lifelong resident of the region, she also serves as senior vice president of Eastern Maine Healthcare Systems, the hospital’s parent organization. “From helping to bring new life into the world to supporting patients and families in their greatest times of need, EMMC is a special place that touches the lives of people throughout the region,” Johnson says. “I come to work every day knowing that the EMMC team makes a difference for the people we serve.” Johnson has overseen what she calls the hospital’s most significant project in generations, an expansion and modernization of the facility, since planning began 10 years ago. The project, which broke ground in 2013, includes adding new space for neonatal intensive care, cardiovascular services, two floors of adult patient rooms, new surgical suites, a renovated obstetrics unit, and a new entrance that will serve as the front door to the hospital. Johnson has helped improve coordination of healthcare services in the region, working with hospitals and other healthcare organizations to ensure care is available close to home.