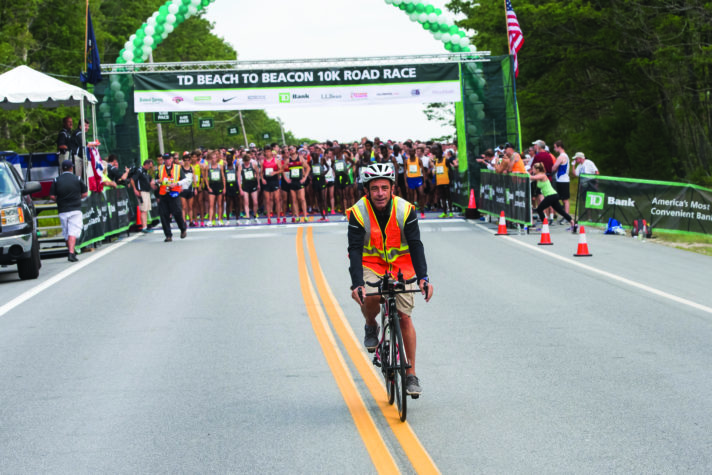 McGillivray at the starting line of the TD Beach to Beacon. (Photo by Ann Kaplan) 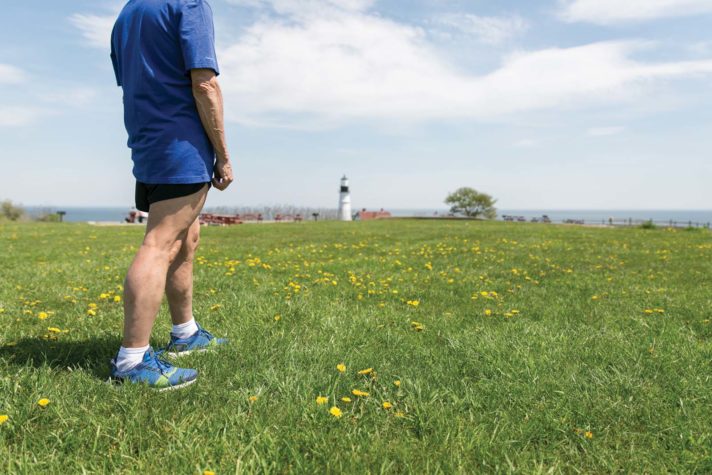 As race director, McGillivray is one of the first ones at the race, which ends at Fort Williams Park, and one of the last to leave.

From running across the country to managing races around the world, TD Beach to Beacon race director Dave McGillivray has learned the value of preparation.

Standing at the finish line of the 1988 Boston Marathon, his first as technical director for the race, Dave McGillivray felt lousy. He had run the race every year for the last 15 years and didn’t want his new position to stand in the way of running it again. So he improvised. He tapped a police officer on the shoulder and asked if he could get a ride back to the beginning of the race. “He said, ‘Did you forget something at the start?’ And I said, ‘Yeah, I forgot to run it.’”

McGillivray ran the entire course that night, and for the past 30 years he has continued his streak, running the 26.2 miles after completing his race director duties and after all the other runners have crossed the finish line. “It’s a commitment I made to myself, and I feel like I need to do it every year until a higher authority says, ‘You’re done,’” he says.

McGillivray, who became race director of the Boston Marathon in 2001, has served as race director of the TD Beach to Beacon 10K Road Race since its inception in 1998. When Joan Benoit Samuelson founded the race, she reached out to McGillivray to be a major part of developing the event. As race director and board member of the TD Beach to Beacon, McGillivray has been involved in nearly every aspect of shaping what the race is today. McGillivray and his race management company, DMSE, Inc., have produced or consulted on nearly 1,000 mass-participatory athletic events nationally and internationally. Other races they direct include the New Balance Falmouth Road Race in Falmouth, Massachusetts; the Harvard Pilgrim Finish at the 50 in Foxborough, Massachusetts; and the Run to Home Base 5K and 9K road race, which starts and finishes at Fenway Park in Boston.

McGillivray’s running and fundraising accomplishments are even more impressive. In 1978, at the age of 23, he ran across the United States from Medford, Oregon, to his hometown of Medford, Massachusetts, to raise money for the Jimmy Fund and the Dana-Farber Cancer Institute. He completed the 3,452 miles in 80 days, averaging 45 miles a day. He and DMSE, Inc. have raised millions of dollars for charity over the years. He has run 146 marathons and competed in the Ironman World Championship nine times, with a personal best finish of 14th place. But the first time he attempted the Boston Marathon, he wasn’t as successful.

In 1972, as a senior at Medford High School, he called his grandfather and told him he was going to run the Boston Marathon. His grandfather lived near the course, so he said he would meet McGillivray at Coolidge Corner, around the 25-mile mark. At age 17, McGillivray wasn’t old enough to officially run the race, and he only made it about 17 miles. “I got to the hills at Newton and just went down,” he says. He was taken to Newton Wellesley Hospital and called his grandfather. There was no answer.

Hours later he finally reached his grandfather, who told McGillivray that he had been waiting for him at Coolidge Corner the entire time. “I said, ‘Grandpa, I failed. I quit.’” His grandfather told him that he didn’t fail—he learned a lesson. “‘You learned that you cannot go along in life and set reckless goals. You know you had no business being in that race,’” McGillivray recalls his grandfather telling him. “He said, ‘I’ll cut another deal with you. You train and I’ll be there waiting for you.’ I said, ‘Deal.’” Two months later, and well before the next marathon, McGillivray’s grandfather died.

This time McGillivray trained for the Boston Marathon. Local newspapers wrote stories about how he was running the race to in memory of his grandfather. But shortly before the race he got sick and had to convince his parents to let him run. They obliged, but he didn’t run much more than 20 miles before he had to stop. Winded and defeated, he looked around. He realized he had stopped at Evergreen Cemetery, where they had buried his grandfather less than a year earlier. “That son-of-a-gun said he would be there for me,” McGillivray says. “Maybe he wasn’t there physically, but he was there spiritually, so I picked myself up and finished in four hours.” After he crossed the finish line, he promised himself that he would run the race for the rest of his life. “When I run by the cemetery every year, there’s his tombstone, and I give him a wave and thank him and pray and say, ‘See you next year, gramps,’” he says.

McGillivray has translated the lessons he’s learned while running—setting goals and overcoming challenges—into his work as a motivational speaker. He’s given around 1,900 speeches, including many to youth. His goal is to improve the self-esteem and confidence of others and to encourage them to dream big. The title of his book, The Last Pick, is in reference how he was always picked last in team sports due to his short stature, so he instead pursued individual sports.

Following his 1978 run across the country, McGillivray opened a sporting goods store in his hometown. He started holding events to promote the store. “Then I realized I liked putting on events more than shoes on people’s feet,” he says. He opened DMSE, Inc. three doors down from his store and began pursuing a career in event and race management. “Most people said, ‘You think you can earn a living putting on road races?’ Back then that’s what they thought it was, but I knew it was something more than that,” he says. “When people ask what I do for a living, I say I raise the self-confidence of tens of thousands of people in America.”

The job of race director is all-encompassing. For small races, it means handling every aspect of the event, from designing the course to deciding where to put water stations to managing spectators and parking. With larger, more established races, the race director is more of a conductor, managing the people working on the different parts, McGillivray says. “The sign of a really good leader or conductor or director is if something went wrong on race day, they wouldn’t be needed,” he says.

With the TD Beacon to Beacon, he gets to step back and evaluate ways to improve the race each year for everyone involved. The race is unique in that it attracts both world-class competitors and locals who have never run a race before. The race director has to design the race for all of them, McGillivray says. But regardless of their abilities, people run races to feel good about overcoming challenges, he says. “At the end of the day, you cross the finish line and you get the medal and you drive home with a smile on the face. ‘I committed to something. I worked hard at it,’” McGillivray says. “That’s pretty powerful stuff. That’s what we do, and that’s why we continue to do it.”

It’s a lesson he learned decades ago, picking himself up in front of a cemetery and finishing his first Boston Marathon. And each year he’s reminded of the lesson when he crosses that finish line once again. 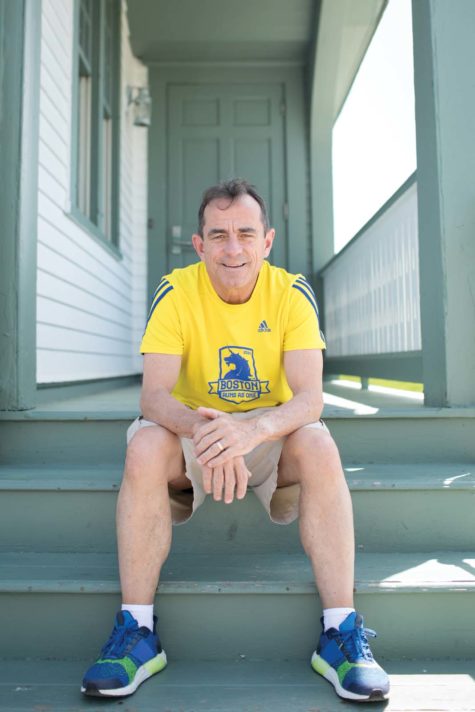 Dave McGillivray has been race director of the TD Beach to Beacon 10K Road Race since its inaugural year in 1998. 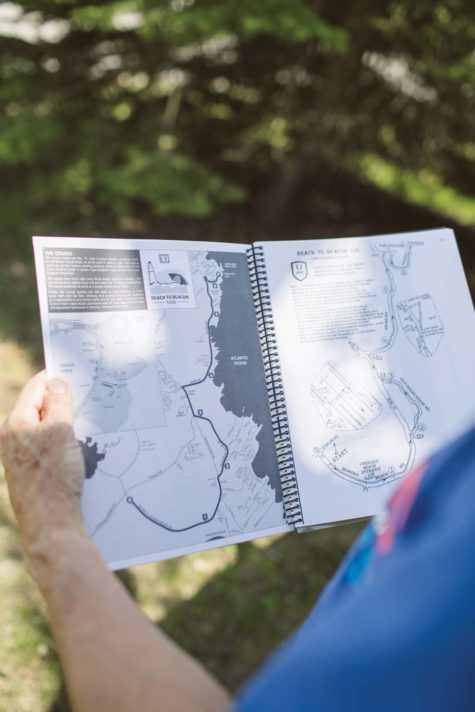 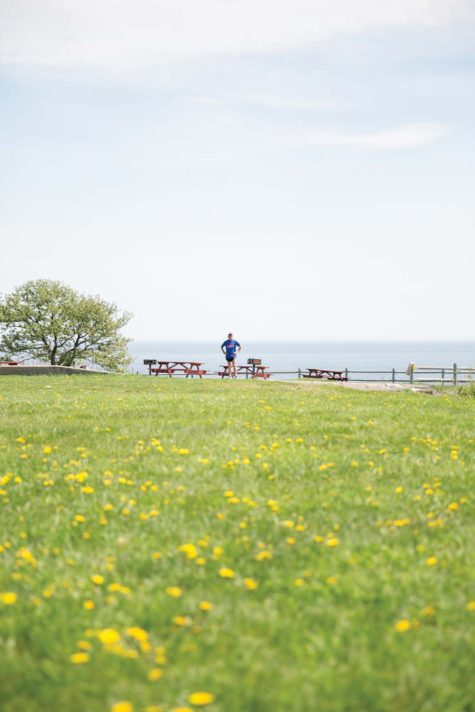