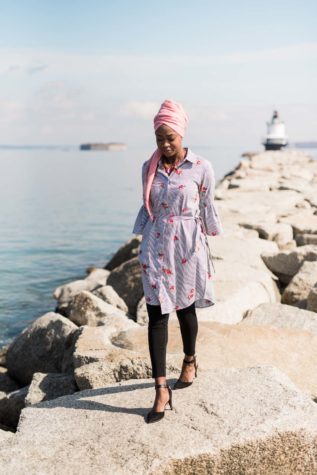 When Ekhlas Ahmed first came to the United States as a child, she felt alone. Now, 12 years later, she’s become an English Language Learner (ELL)teacher so she can help students become more comfortable as they adjust to life in America. “I couldn’t look to people and resonate with their stories,” she says. “I want to close the gap between ELL students and main- stream students and fully integrate them so they’re not isolated, because this is their home now.” This spring, Ahmed completed her master’s degree in teaching English to speakers of other languages at the University of Southern Maine. Originally from Darfur, Sudan, Ahmed says she turned to writing when she first moved to the U.S. as a way to express herself. “I write a lot of poetry that reflects on struggles of being a black woman in the state of Maine, of being a Muslim woman trying to use my voice,” she says. Ahmed uses her voice not only to express herself but to help others. She is the cofounder of Darfur Youth of Tomorrow, an organization promoting awareness of the Sudanese genocide. Ahmed says Maine has become a more welcoming place over the past several years, but she’d like to see more change. “From person to person, we need to check our biases and not come to conclusions right away,” she says. “Don’t look at refugees or new Mainers as strangers, because this is their home now.”