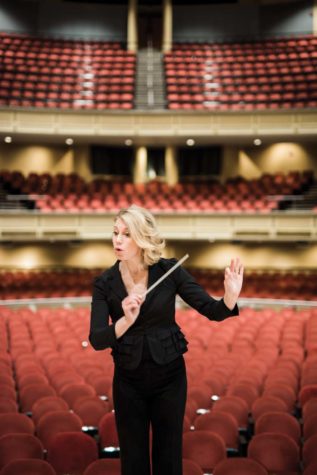 Since Emily Isaacson was 15, her dream was to become a conductor. She grew up in Maine, but she left the state for college, two master’s in music, and a doctorate in conducting. Between degrees she taught music at a public charter school in Washington, D.C., and then again in Boston. Isaacson also helped launch Roomful of Teeth, a Grammy-winning vocal music ensemble. She always wanted to return to Maine, though, and she got her wish in 2013 when she became the artistic director for the Oratorio Chorale and Maine Chamber Ensemble. Since then, Isaacson has launched the Portland Bach Experience, a nonprofit that presents world-class classical music events throughout the city through a series of festivals. The June festival included classical music performances in unexpected locations, such as a concert at Bayside Bowl and the playing of all six of Johann Sebastian Bach’s cello suites in different public locations throughout the Portland area. Those events were part of Isaacson’s goal to make classical music feel more approachable and less elitist. “I resist the sterile way in which we experience classical music in the twentieth and twenty-first century. I want to return classical music to its natural habitat, which is social and weaved in to people’s everyday life,” Isaacson says. Another goal of the festival is to draw people to Portland who will boost the local economy. “Entrepreneurship is a core part of the Maine spirit, and it’s in the arts, too,” she says. “You just need to work really hard and have a great idea.”