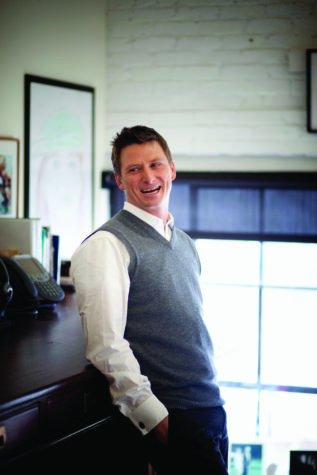 CEO and president at athenahealth

“There is a natural empathy fiber and empathy gene that exists in Maine, and I don’t know of other places where it exists,” says Jonathan Bush, CEO and president of athenahealth. The company, based in Massachusetts, provides internet-based services for hospitals and doctors. In 2008 Bush oversaw the opening of a Belfast office with eight employees. Now, the company employs about 900 people at the Belfast operations headquarters, which expanded last year with the opening of the Athena Operations Lodge in a former MBNA warehouse. Bush says one of his proudest accomplishments is the culture at the Belfast operations center, where workers with “the perfect cross section of ingenuity and empathy” help resolve conflicts for clients. Bush, the cousin of former president George W. Bush, has Maine connections himself. He vacationed in Kennebunkport when growing up, and now his family spends part of its summers in North Haven. He’ll be biking in the American Lung Association’s Trek Across Maine this summer, going from Sunday River to Belfast. In 2013, the Massachusetts Technology Leadership Council named Bush the CEO of the Year. Earlier this year, Tufts Medical Center presented Bush with its Ellen M. Zane Award for Visionary Leadership. In the announcement Michael Wagner, president and CEO of Tufts Medical Center, applauded Bush’s “enthusiasm to drive change in healthcare for the greater good.”