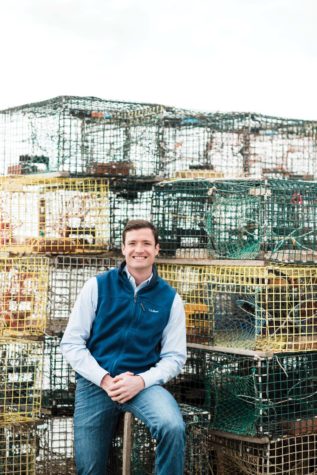 Luke Holden’s family has been lobstering in Maine for generations, but his post-college plans took him in a different direction. After graduating from Georgetown University, the Cape Elizabeth native moved to New York City and got a job in the finance industry. Wanting to create a taste of home in New York, Holden and his business partner, Ben Conniff, opened a lobster shack in 2009 in the East Village. Luke’s Lobster has since grown to 39 locations across three countries. Holden says “naïve passion” helped the pair find success. Their commitment to the lobster industry also led to them to create the Tenants Harbor Fisherman’s Co-op, which buys members’ catches at or above market price. Half of the profits from the Luke’s Lobster in Tenants Harbor go back into the co-op. “I want to follow in my father’s footsteps and have a positive impact on the lobster indus- try,” Holden says. “Maine is home, plain and simple. The lobster industry is in my blood.” Earlier this year, Holden got Luke’s Lobster certified as a B Corporation, reflecting the importance of social and environmental standards in the company’s business model. Getting the certification is rare for a restaurant, but Holden says he wanted to show how serious he is about using sustainable seafood.