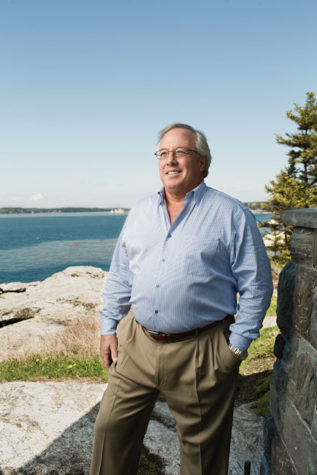 Paul Coulombe was born in Lewiston, and that’s where he inherited his father’s liquor business, White Rock Distilleries. Coulombe’s business grew from three employees to over 200 employees and became one of the 25 largest businesses in Maine in 2012 with revenues that exceeded 200 million dollars per year. When he retired, he got involved in the Southport community. Coulombe advocated to save an historic building that since 1777 has been a town hall, general store, and restaurant, and also Cuckold’s Lighthouse, which marks the entrance to Boothbay Harbor. Now the historic building is Oliver’s Restaurant and Cuckold’s Lighthouse is an inn. Coulombe also purchased Boothbay Harbor Country Club golf course and renovated the property, which is now one of the top five golf courses in Maine. “My overall goal is to make Boothbay more economically viable and to create more job opportunities for the people of Boothbay,” says Coulombe.