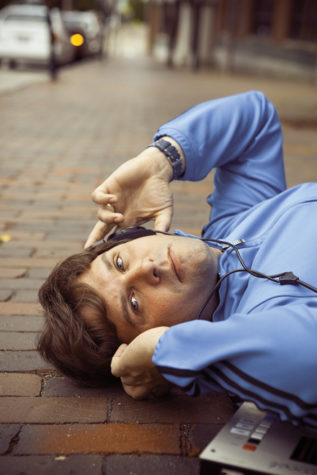 Adam Ayan won his first Grammy Award in 2006 for his mastering work on the Jelly Roll Morton set The Complete Library of Congress Recordings by Alan Lomax. In 2007 he became the first mastering engineer to win for "Best Engineered Album." 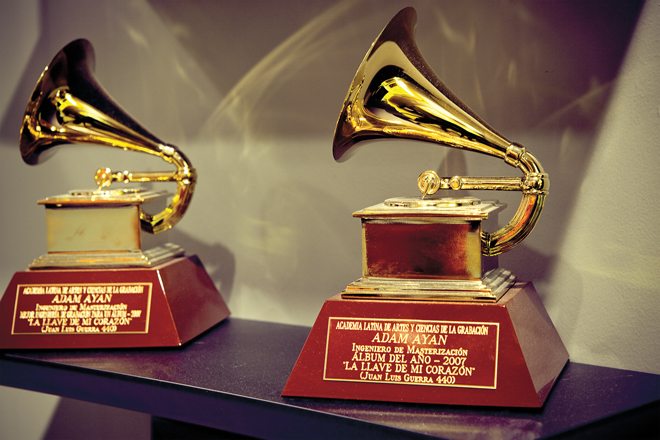 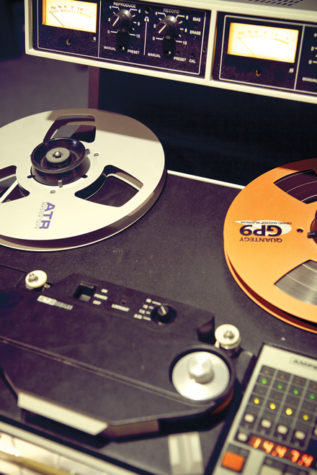 PROFILE-November + December 2010
By Will Bleakley
Photographs by Jarrod McCabe

He’s collected three Grammy Awards and over fifty gold, platinum, and multi-platinum albums. Artists from the Rolling Stones to Tim McGraw trust him to put the finishing touches on their music. Millions have heard his work, but few have ever heard of him. Meet Adam Ayan, Portland’s masterful mastering engineer.

From the outside, the studios of Gateway Mastering & DVD resemble the nondescript entrance to a dentist’s office. Inside, however, the walls are filled with platinum albums, shelves are decorated with Grammy Awards, and behind the closed doors are arguably the finest mastering tools and engineers in the industry.

Adam Ayan walks out of his studio with news to share: “The Latin Grammy nominations came in, and I got nominated for Album of the Year.” He’s excited, no doubt about it, but not over the moon. With multiple platinum albums hanging above him—including those of Rush, Rascall Flats, and Keith Urban—Ayan can let his walls do the talking.

Although Gateway founder Bob Ludwig’s forty-year career working with the likes of Bruce Springsteen, U2, and Radiohead gave the company its prestige, his protégé is the one to watch. Thirty-five-year-old Ayan has compiled a resume in less than ten years that stands on its own next to his mentor’s. He already has more Grammy Awards and a growing clientele that includes the Foo Fighters, Madonna, Carrie Underwood, Sarah McLachlan, and the Rolling Stones.

Ayan is driven to serve as the bridge between the artist’s vision and the listener’s experience. His ears are the last stop before an album hits the airwaves. “It’s my job to enhance their art—not to put my own stamp on it, but to bring what they imagined to a place, sonically, that they never before thought possible,” Ayan says.

***
Ludwig began Gateway in 1992, hoping to continue his career in a less-hectic environment. He worked at Masterdisk in New York City and built a reputation as a—if not the—premiere mastering engineer. He wanted to start his own company and do it in a city that appealed to him. “It was definitely risky to move out of New York City. Nobody had really done that at the time,” Ayan says. “But it’s been an enormous success, and I think it speaks for his work and his talent that the high-profile clientele followed him up to Maine.”

Ayan first heard of Ludwig as a teenager when he saw his name in the liner notes of his favorite albums, including I Love Rock n’ Roll by Joan Jett and the Blackhearts and Kill ‘Em All by Metallica. At the time, Ayan was, as he puts it, “On the other side of the glass, as a musician.”

His musical sensibilities were shaped, as so many are, by an older eighth-grade girl. “She said to me ‘you’d really like this band Metallica’ and I, of course, did what she told me,” he says. “From then, it was kind of game over for me—I was no longer going to just be a fan of music.” Ayan followed his musical passions into the sound recording technology program at the University of Massachusetts. While there, he became president of the Audio and Engineering Society, and part of his role was organizing events that brought high-profile speakers to the school. He reached out to Ludwig and asked him to be a speaker. Ayan was aware of his vaunted status in the industry but unsure exactly what was entailed in the mastering process. “In doing that research on him, I was like, ‘Mastering sounds interesting to me,’” Ayan says. “I like recording, but this sounds even more intriguing to me because I’m hearing the music as a whole. I get to enhance an album in its entirety. That really spoke to me.”

He tried to get an internship with Gateway, but settled for working at a mastering studio outside of Boston. In 1998, a position opened up for a production engineer at Gateway, and Ayan jumped at the opportunity. “It was an extremely rare opening at our studio,” says Ludwig. During the interview process Ludwig tested him by playing an album with “booby-trapped” sonic anomalies that a production engineer would need to recognize. Ayan fixed 99 percent of the mistakes.

Ayan quickly earned Ludwig’s trust and admiration. “He practiced mastering in my studio every morning before I got in. There was one magical moment where I arrived at work, walked toward the studio, and I heard sounds coming through the door and I said to myself, ‘That is exactly how I would have made it sound.’ That was a
very exciting moment.”

Ludwig—who keeps his mastering techniques closely guarded—chose Ayan as his protégé. “Adam is one of those few people who is naturally gifted to be a great mastering engineer,” Ludwig says. “He has that ability to hear a raw tape, imagine in his head how it could sound, and know what knobs and gears to use to make it a reality.”

Ludwig began directing some of his clients to Ayan. His first big record was Collection by Tracy Chapman. He has since mastered ten Grammy Award–winning recordings, and more than fifty gold, platinum, or multiplatinum projects. He’s worked with over 200 artists, won two Latin Grammy Awards—including Album of the Year for Juan Luis Guerra’s La Llave De Mi Corazon—and was nominated in 2008 for Album of the Year for his work on Vince Gill’s These Days.

***
Ayan does his best to describe mastering in understandable terms when talking with people outside the industry.

“It’s the final creative step in making a recording a record,” he says. “I’m given a mix by a band, and my job is to take that and make it sound as good as it can, bring it to another level sonically. Creatively, for me, that’s making the music translate to a listener’s iPod, car, or stereo as well as possible. It’s shining the best light on the recorded music that I can.”
Using “polishing,” or “finishing touches” as descriptors undervalue the importance of Ayan’s work to a record. The best way to describe the process of a mastering engineer is to go into the studio and listen.

Ayan played for me the before and after version of “Ain’t Nothing Like You (Hoochie Coo)” by Blakroc. Little in the first version of the song caught my attention. But when he played the mastered version, I heard it: a hip-hop anthem with a complex beat that coupled Mos Def’s atonal but perfectly suited voice and lyrics with a gritty guitar line underscoring the track.

For anyone with a strong connection to a particular song, there’s often one note, guitar riff, lyric, or beat that transcends the music. It goes beyond the realm of listening to conjure up a feeling that hits right in the gut. For Adam, it’s the bridge in “Monkey Wrench” by the Foo Fighters. The job of the mastering engineer is to make sure that moment gets heard, and that a particular note, instrumen t, or lyric doesn’t get lost amid other sounds.

Ayan is also involved with the local music scene. He played a role in the Creative Economy Steering Committee, whose recommendations helped lead to the Portland Creative Corporation, and he started the Portland Music Foundation. “I wanted to help Portland musicians, so I created this to be an anchor for the music community and to help musicians achieve their own version of success.”

The Portland Music Foundation runs workshops and networking events for local musicians to gain each other’s perspectives and learn about vital, but often overlooked aspects of the recording industry. “Our mission is to show musicians how it’s possible to have a career” president Patrick May says. “To do that, we have a ‘Music as a Profession’ education series. We teach everything from how to play a gig to marketing.” On Sunday, October 17, the Portland Music Foundation hosted their third annual Launch event—this year at the newly reopened State Theatre, where local acts played throughout the day.

Whether it’s at the Portland Music Foundation or at Gateway, Ayan’s enjoyment for his work stems from taking a heightened interest in the nuances of the music industry. “People generally don’t know what mastering is, but they can tell when something is missing on a record. I’m responsible for those missing parts and making sure the album sounds complete,” Ayan says. While even the most knowledgeable fans may neglect Ayan’s work, the fact that so many of the world’s best musicians continue to rely on him serves as a testament to the importance of his art.

It doesn’t bother Ayan that he’s not recognized outside the industry. “If the music translates and the listener enjoys the album, then I’m just happy I could be a small part of that puzzle,” Ayan says. If his platinum albums and gold Grammy statues could weigh in, they may not be as humble.