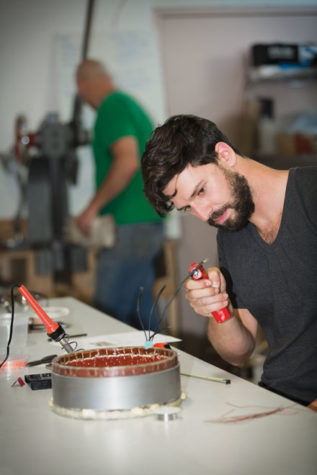 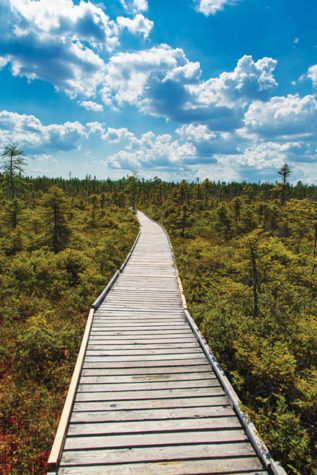 Orono Bog, a trail system near the University of Maine, where Susan MacKay of Cerahelix has chosen to build her company. 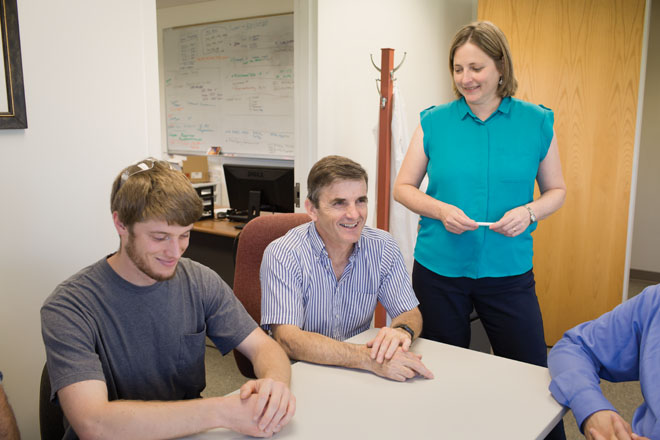 James Hutchinson, Jim Hart, and MacKay, who as she looks towards future development, says her staff is critical. 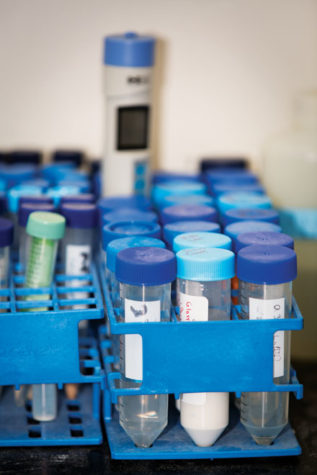 Samples of DNA ceramic coating materials being prepared for testing. 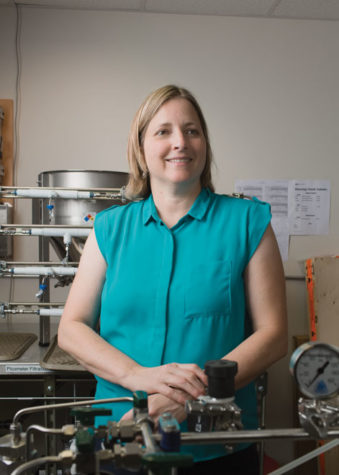 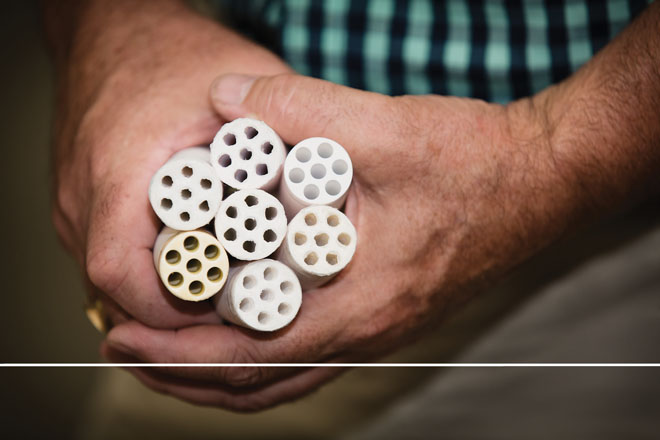 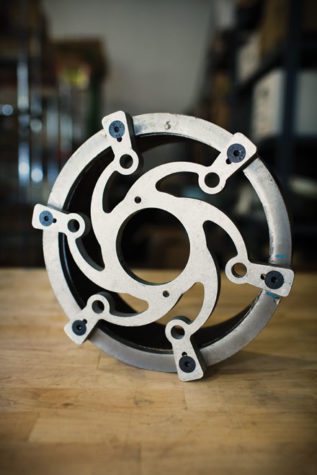 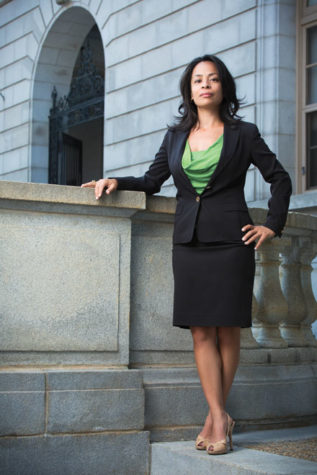 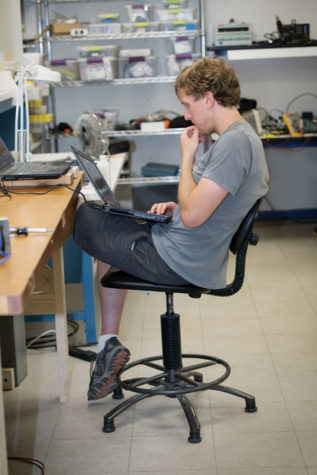 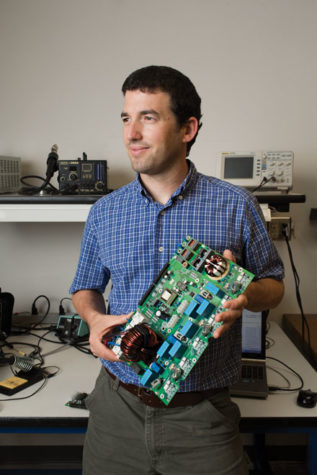 They say you have seven seconds to make a good first impression. But when Susan MacKay stood before a full house of Maine Angel investors to present her new business, there were, true to Maine interconnectedness, many familiar faces in the room. Many of the Angels were already familiar with her business plan and had watched MacKay evolve through the state’s Top Gun mentorship program. Now she was hoping she could demonstrate how far she’d come. “It was harder in some ways,” remembers MacKay. “It was one of the larger turnouts, and I remember feeling a little nervous because there were some people in the group who watched me from early on, who already had a first impression, so I was trying to refocus and show them where I was at with my company.”

Her Orono-based company, Cerahelix, uses DNA to build ceramic filters for water and other liquids. The product provides high-purity filtration, which uses less energy and can function under a wide range of conditions that enables companies to recycle and reuse water. The company launched in 2011 and initially focused on cleaning highly contaminated water from fracking and tar sands. “The real value of our technology is that we can filter water and other liquids to high purity needed for reuse and because we are ceramic we can work under all kinds of environments,” says MacKay. Maine Angels saw the benefit, too, and invested in Cerahelix. They recently provided follow-on funding to the company.

In 2014, Maine Angels, a group of angel investors, ranked first in the country for follow-on investments, meaning when startups such as Cerahelix come back to investors for another round of funding, Maine Angels is more likely to invest in them again. “That’s because we stick with our entrepreneurs,” says Catherine York, secretary of the Maine Angels board. “There are plenty of Angel groups that focus investment on the newest startup, but if that company can’t achieve its next round of funding, they can’t grow their teams and they can’t secure more of the market that they’ve targeted.”

Originally from Aroostook County, York, like many investors on Maine Angels, has entrepreneurialism running through her veins. “It’s in my blood, and I also believe it is the best path to economic development, job creation, and betterment of community.” York left Maine to attend college in Washington, D.C., where she also worked on the Bill Clinton campaign. Working on the campaign, she learned about some of the initiatives Clinton had proposed: the creation of empowerment zones in lower income neighborhoods, and providing various incentives to create jobs to support businesses. “I connected with that personally, coming from my background of northern Maine, an economically depressed area that could have used, could still use, this sort of support to spur growth.” York later worked for the Democratic National Committee, built and sold an online auction business, and joined SunEdison when it was a young company. She is currently managing director and chief executive officer of Constant Energy Capital.

When York moved back to Maine in 2012, she wanted to get involved in the business community. “I wanted to figure out how I could help entrepreneurs drive economic development and get to know other people who were making an impact,” she says. All her contacts pointed her in the direction of Maine Angels, where her investments have focused on clean energy, energy efficiency, and sustainable food companies.

An investor can crunch the numbers and try to figure out what makes sense for the future market. For York, angel investing involves some of this. “The plan has to be compelling and the solution to the problem has to be good enough, but ultimately, it boils downs to who the person is. I mostly focus on the entrepreneur. Sure, you need to think about how it’s going to look in three years, five years, ten years, but that’s very difficult to do even for the smartest or most experienced person,” says York. “The question you need to ask is—do you believe in that person? Does that person have what it takes to see the plan through that they presented?”

For York, one of those people was Ben Polito of Pika Energy. With offices in Westbrook, Pika Energy builds more robust, less expensive residential wind turbines and power electronics. The company is focused on enabling micro-grids throughout the country. Polito, ironically, grew up off the grid on Georgetown Island.

“Until I was six or seven, the place we lived was two miles beyond the last power pole—it was all oil lamps and pumping water by hand. It was a great way to grow up, but when we would go somewhere that had electricity it was magical,” says Polito. A technologically minded kid despite his rural upbringing, Polito began playing with switches and messing around with batteries; by elementary school, he was building wind turbines and solar panels. He went on to study engineering at Massachusetts Institute of Technology. “I learned more about energy and how having sustainable, clean, homegrown sources was going to be absolutely critical to maintain the remarkably rich lifestyle we all enjoy.”

Dedicating his professional engineering career to developing clean sources of energy, Polito started Pika Energy with co-founder Joshua Kaufman. While the idea for Pika may have been generated in the heart of technological enterprises in Boston, Polito decided to move his company to Maine for reasons that are universally understood among state startups: quality of life and easy access to a life outdoors, but also affordable real estate and quality resources. “For what we don’t have in quantity of resources, we make up for in quality,” says Polito, who meets regularly with other startups in roundtable discussions to bounce ideas off of each other and share resources and opportunities. For Pika, Maine Technology Institute, Maine Department of Energy, and Maine Center for Entrepreneurial Development have been critical to success. Mentors have been important, too. Maine Angels—aside from follow-on funding statistics—is one of the more active Angel groups in the country. York, who worked closely with Pika, served as a mentor for Polito and, along with Don Gooding and Paul Farrow, also of Maine Angels, sat on Pika’s board.

There is a steep learning curve for someone starting a company for the first time. “Good mentorship is listening, not giving the answers, but helping provide resources so that the entrepreneur can get to the answer. It’s providing examples of similar experiences, so that they have alternatives to what they’re considering, and frankly, it’s being available for those questions that come up at random times, so they don’t feel like they’re out there on their own,” says York. For MacKay, running Cerahelix means solving problems daily and answering to customers who are right in front of her. She’s immersed in the inner workings of her company—some days, too much. “Good investors come with more than money,” says MacKay. “Every day you are focusing on different aspects of your business—investors help you step back and look at the big picture. To be successful you have to be looking at the big picture and that’s where investors and boards are key because they help you and force you to do that regularly.”

After receiving its follow-on funding Cerahelix is now looking to expand nationally. Companies seeking to reuse water either due to scarcity, regulations, or the high cost of off-site treatment have become interested in Cerahelix’s product. MacKay says that the portfolio that Maine Angels has created has gained credibility for her company in the eyes of national investor groups. But even with future growth, she wants her company to remain here in Maine. “I have lived a lot of different places, and there’s no reason we can’t do what we want to do in Maine,” says MacKay. “This is the ideal place to be. Companies in other New England states are envious of Maine’s environment for startups. I feel good about resources we have to draw from.” One obstacle for the future, she says, is staffing. “Being able to find people when we need them and finding the right people,” says MacKay. “We are starting from a smaller pool because we’re up in Maine, but we can’t really slow down, and so finding that talent pool is becoming critical.”

That’s something Jess Knox, founder of Maine Startup and Create Week, is hoping to influence. “One of the great benefits and burdens of the state is that there aren’t that many people,” says Knox. This affects businesses in their ability to hire talent, and also makes it difficult to broaden their customer base. With a week of inspiring speakers, roundtable discussions, and panels that are all about smart business growth, the conference is trying to inspire and connect local business leaders, but also influence people and businesses to come here. “Maine has all the raw material to really be an incredible place for people to start and expand their businesses,” says Knox. “We’re only two hours away from the second-largest collection of talent and capital in the country, but we are also an incredible place to live and our creative class here in Portland is quite substantial.”

That’s nothing new—communities here in Maine are small. But within the smallness is a closeness that allows startups to flourish. It’s what allows Susan MacKay to stand up in front of the Maine Angels and present her newest idea. It’s what gives Ben Polito direct access to a seasoned mentor like Catherine York who wants to see him succeed. “When I first moved back to Maine,” explains York. “I found that, in the business community, people had the mentality of ‘it takes a village.’ Walking up and down Exchange Street, meeting other business owners and seeing how business owners support each other, you see how there’s really one degree of separation. If an entrepreneur wants to talk to a Maine Angel, wants to talk to a venture capitalist, they’re usually one conversation away,” says York.