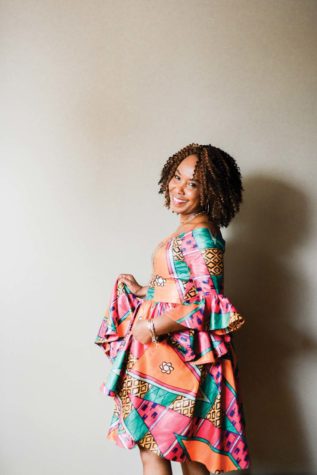 Fashion designer Adele Masengo Ngoy rose to prominence in southern Maine through her vibrantskillfully crafted styles and support of a growing design community in Portland. In the Democratic Republic of the Congo, Ngoy attended fashion school and worked as a professor. When she came to Portland as a refugee and single mother in 2000, she couldn’t speak English and felt “hopeless and lost,” as if she had lost the power to express herself. “It was very challenging until I could do my art and my work,” she says. She eventually learned English and re-established herself as a designer, founding Adele Masengo Designs and purchasing Antoine’s Tailor Shop and Formal Wear. She wanted to support other immigrant women who might not have the skills to immediately find the well-paying jobs that are necessary to build new lives in Maine, so in 2011 she founded Women United Around the World. The organization promotes the leadership development of female immigrants, teaches sewing, and provides workshops and connections for new immigrants in the community. Thirteen women went through the sewing program, and several have already found jobs in the sewing industry. She is thankful for the board members of Women United Around the World and for her friends in the community who have supported her, saying, “I’m proud to be in Portland.”