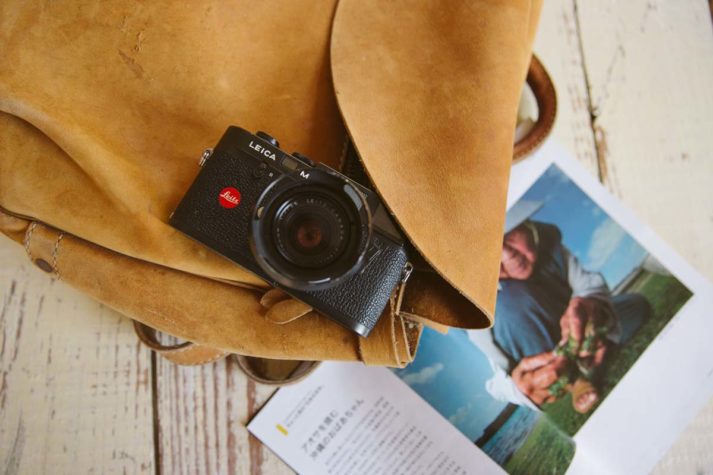 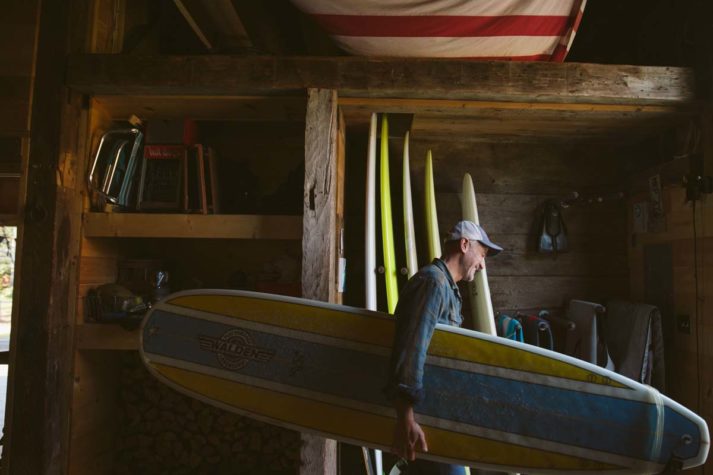 McLain and his son Finn surf at nearby beaches through the winter, spring, summer, and fall. 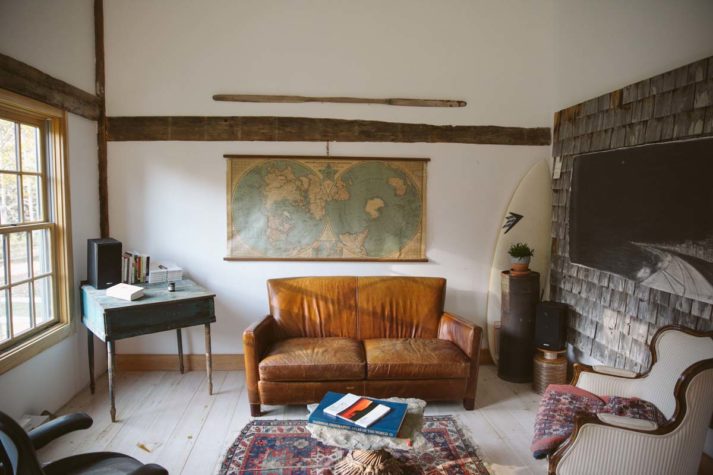 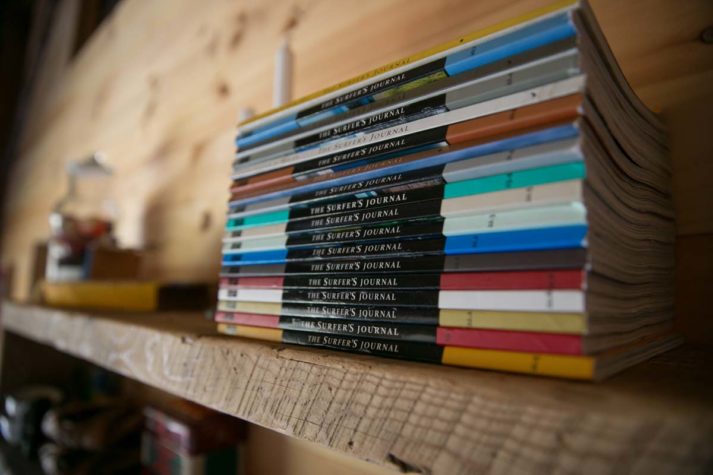 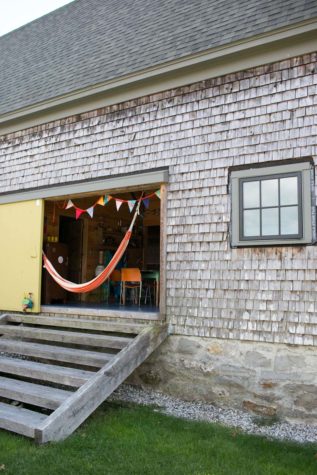 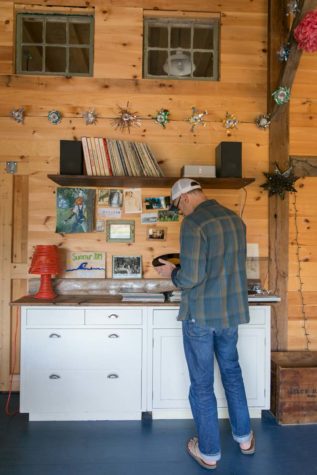 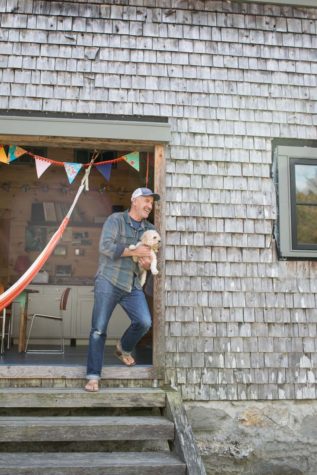 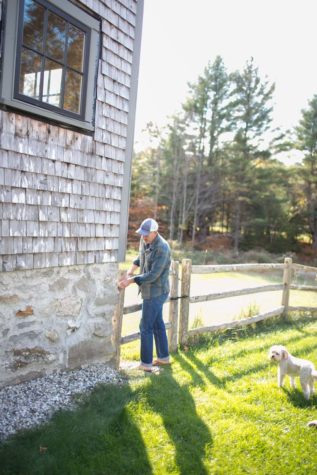 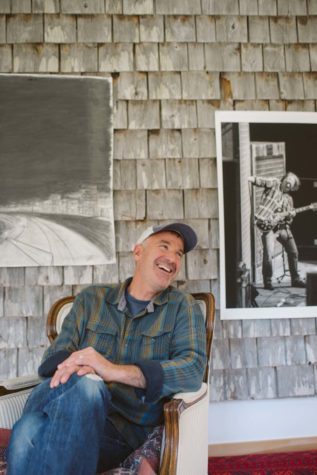 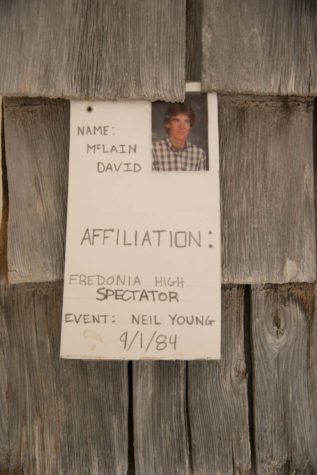 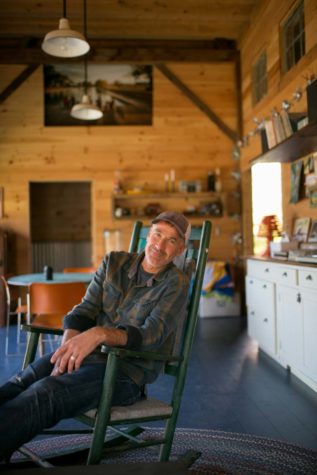 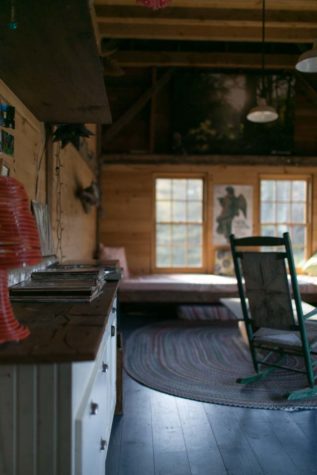 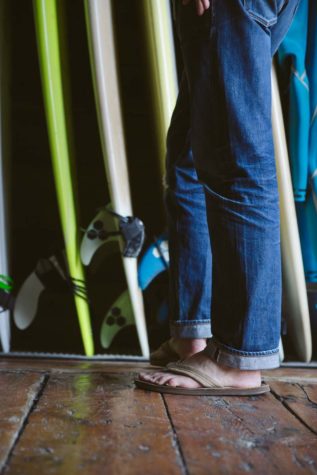 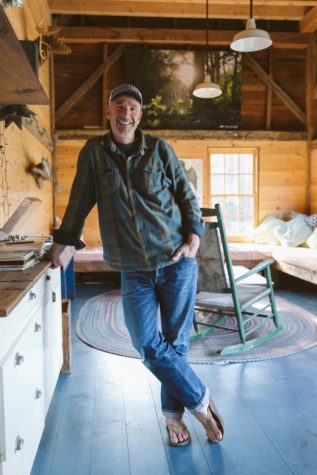 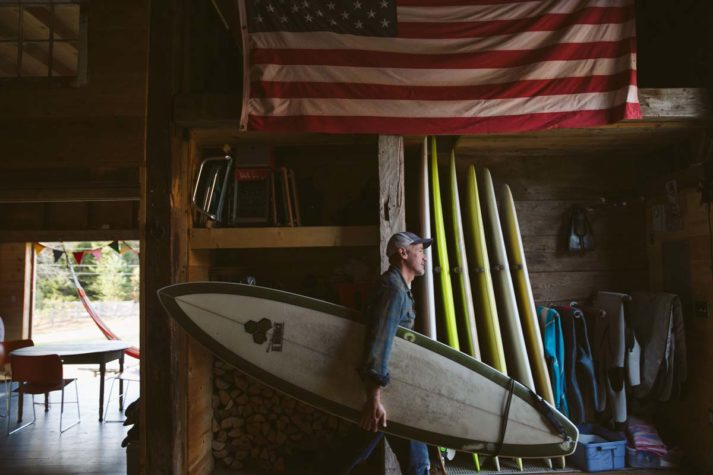 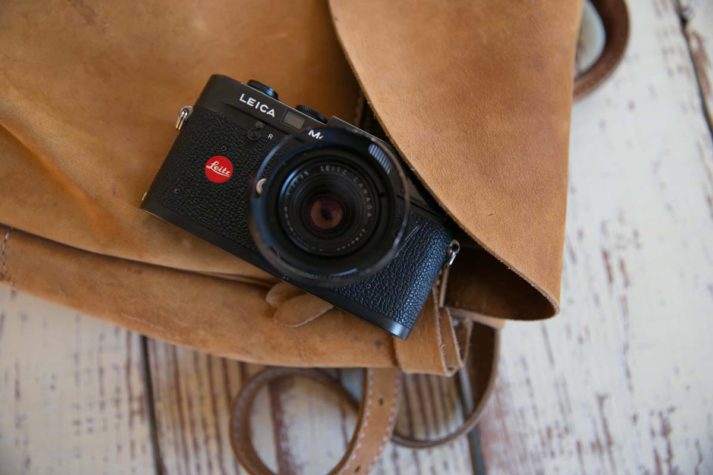 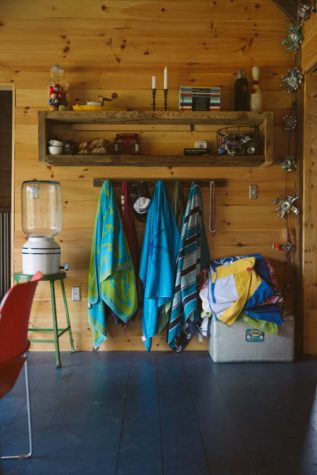 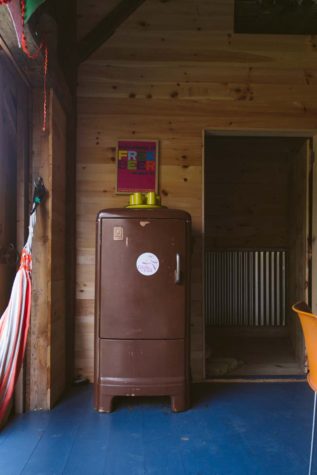 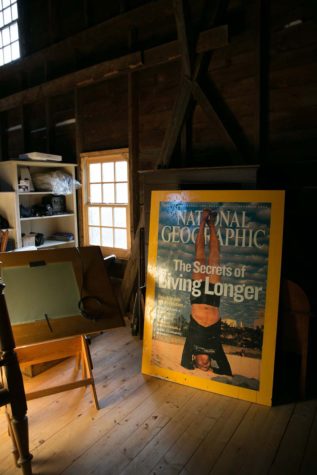 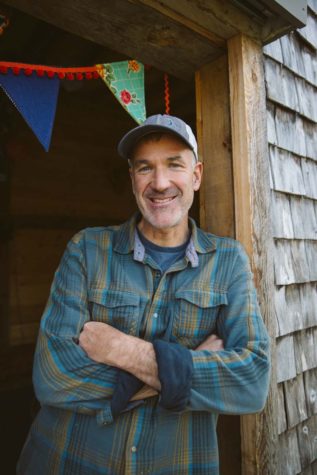 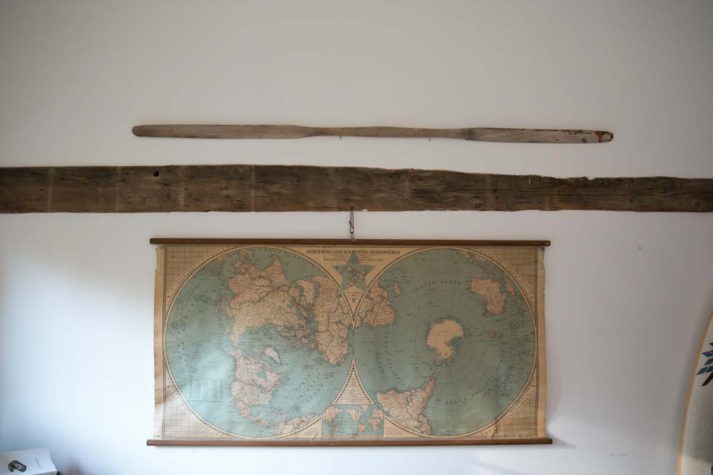 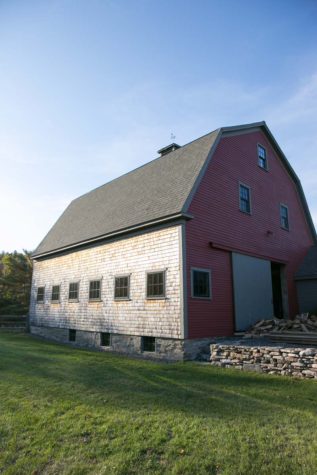 Around the World and Home Again

David McLain’s office is in the back of an old barn attached to the 225-year-old North Yarmouth farmhouse he shares with his wife, Anne, and their two children, Finn and Myla. It is not your typical office. The light- filled space has been outfitted in a boho- modern mixture of decor: a worn leather couch, an oriental rug, a vintage map, and a double-sided desk that allows the photographer to stand or sit as he pleases. Running across the length of the back wall is a mounted wooden paddle, smooth with age, pocked and stained.

“See that?” McLain asks. I move closer and note an inky drip at the paddle’s edge. “That’s narwhal blood.”

What I presume is a cool flea market find was actually given to McLain by Inuit hunters in the town of Qaanaaq, Greenland, one of the northernmost towns in the world, situated less than 900 miles from the North Pole. He received the keepsake after a hunt, while on an assignment for National Geographic shooting a story about the effect of global warming on the several dozen people left on the planet who use paper- thin sea kayaks to chase down and spear narwhals. McLain tells me what it’s like to watch a man kill a 2,000-pound walrus with his bare hands and about the polar bear pants he wore to stay alive for five weeks on the ice.

“I had $7,500 in the budget to buy gear, so I got these custom clothes made by a company in Seattle,” says McLain, “but when I got to Qaanaaq the hunters looked at my stuff and started laughing and pooling money. I said to the fixer, ‘What are they doing?’ and the fixer said, ‘Oh, they’re taking bets on how quickly you’ll die.’ Of course, they weren’t going to let me do that; they went neighbor to neighbor and dug up these polar bear pants and seal skin boots and fox anoraks-basically caveman clothes.”

McLain says the Greenland assignment was one of his favorites to date, not just for the barren beauty of the Arctic or the drama of the hunt, but for the people he met there. “Photography gives you a reason to engage with the world and engage with people and learn their stories,” says McLain. “It’s made me incredibly hopeful for humanity. You go anywhere, and most people are just trying to get their kids off to school, just trying to make their one life a little bit better. They just are.”

So how did he land this quintessential dream job? Ask McLain to start at the beginning and he’ll tell you about his first camera, a Pentax ME Super. This is the first of many times (18, to be exact) that McLain will use the word “super” during our hour-long conversation, along with other words, like “totally,” that, in combination with his Rainbow sandals, worn Levis, and relaxed demeanor, suggest the California coast more than western New York, where he grew up. While a photographer for the Fredonia High School yearbook, McLain met his first mentor, Joe Traver, a Buffalo- based photojournalist. “He took me under his wing,” says McLain of Traver. “This was when it was still really hard to learn photography. I don’t say this as a bitter old man or something, but back then learning how to shoot a picture, to expose the film, and develop the print took, like, years of practice. Years. It was a craft.”

At Syracuse University, McLain studied English and anthropology and worked as the photo editor for the university’s daily paper, taking occasional assignments for United Press International and the New York Times. After graduating, he taught English in northern Japan, saved money, and traveled around the world. A year and a half later, he returned to the newsroom. While he was living and working for a paper in Connecticut, McLain and Anne started taking regular sea kayaking trips to Deer Isle and Stonington, where they became enamored of the people and landscapes they encountered. In his words, “Maine triggered an instinctual sense of belonging in me.”

“One time I asked my friend’s dad for some life advice,” McLain goes on, “and he was like, ‘Get where you want to live and then figure it out. If you don’t do that you’re going to move somewhere for a job, and then the next thing you know all your friends and everything is going to be there, and you won’t be able to leave.’ It sounded crazy at the time, but in retrospect it was so smart. That was exactly what we did. Anne and I moved to Maine because we knew we wanted to be here.”

In Maine, McLain connected with José Azel, a National Geographic photographer based in Lovell. “Right after I met with him the first time he sent me this little blurb in the Wall Street Journal,” says McLain. “It was a story about a little bug in Peru called cochineal that’s been used for hundreds of years to make red dye, and he had attached a note that read, ‘This would be a great story.’” So McLain spent his own money on a trip to South America. The story never appeared in print, but Azel knew that McLain was serious and started recommending him for assignments with Ski magazine and Outside. Years later—17 years after he picked up a camera for the first time—McLain sat down with Azel and the assistant director of photography from National Geographic, who sent him to an archaeological dig in Missouri. “If they found a little bone the size of a fingernail it was earth-shattering,” says McLain of that underwhelming assignment. But newspaper work had taught him “to make lemons out of lemonade.” He stayed for two weeks. He rented a cherry picker to get a decent aerial shot. The editor was impressed, and from there McLain started to shoot regularly for National Geographic, where he met his most recent mentor, photo editor Susan Welchman, who recently moved to Maine herself.

Over the past fifteen years, McLain has covered topics like the rising incidence
of allergies around the world and the secret to living a long and healthy life, as revealed by residents of Okinawa, Japan; Sardinia, Italy; and Loma Linda, California, where people have the longest average life expectancy. His image of an 84-year-old Okinawa man standing on his head made the November 2005 cover of National Geographic. In addition to his editorial work, McLain co-owns the production company Merge Group with long-time collaborator Jerome Thelia. Together they make photographs and videos for clients like Apple, Sony, and Toad & Co. In 2015, Journeyman Pictures released Merge’s full-length documentary film Bounce: How the Ball Taught the World to Play about the origins and universality of ball sports—including cricket, foosball, soccer, keep-away, and Ba, an ancient game of mob football played in the Orkney Islands. The project took McLain around the world—to Brazilian favelas and Congolese villages and Scottish isles—and back again to Maine.

In David McLain’s office, on the wall opposite the paddle, is what I presume to be a piece of abstract art. Framed in weathered wood is a simple but lovely drawing—a cluster of red circles drawn on textured white paper, some empty, some colored solid. As with the paddle, I presume wrong. This object reveals something about McLain’s life, too.

At the beginning of each year, McLain draws 84 circles on a piece of paper. Every day that he doesn’t sleep in his own bed—a bed he made from salvaged barn wood as
a birthday gift for Anne—he colors in a circle. Eighty-four: the maximum number of days he’s willing to be away from his family and away from Maine, equal to the number of days in a week, multiplied by the number of months in a year. Sometimes this means turning down work, or limiting the number of adventures he’ll go on in other parts of the world so that he’ll be around to experience the ones unique to home.

“Every time my plane touches down in Portland, I’m like, thank God I’m home. And it doesn’t matter if it’s the dead of winter or August, I love it just as much,” he says. His voice is edged in excitement as he goes on to name the places in his home state he has yet to go. I recognize this voice. It is not so different from the one he used when telling me about Greenland. “I’ve never been to Aroostook County. I’ve never been to Fort Kent. I’ve never paddled the Allagash, never paddled the St. John,” he trails off. 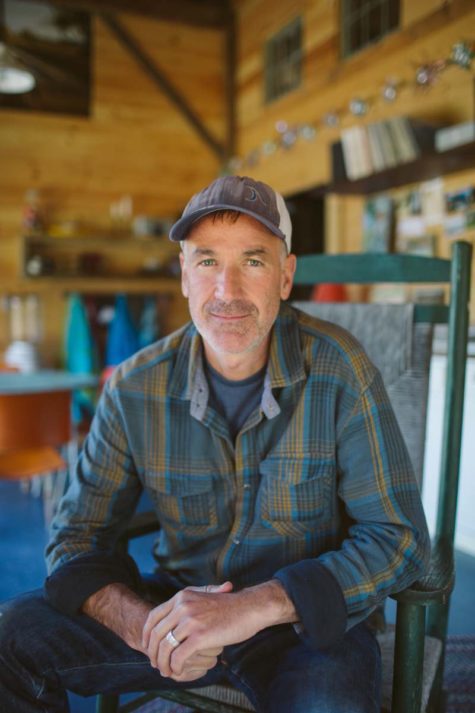 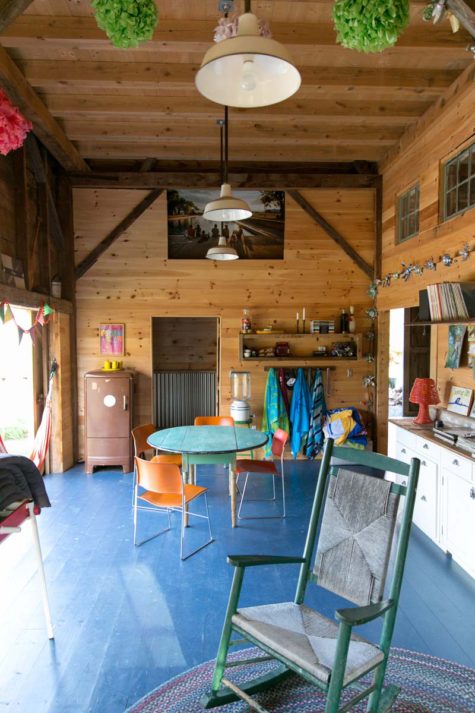 A peek at the “pool house” and casual living space inside the barn, which holds, among other things, McLain’s extensive Neil Young album collection. 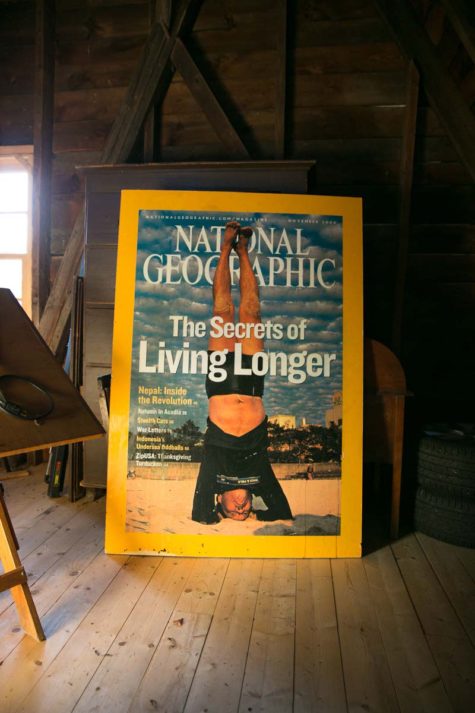 A cardboard cutout of the November 2015 National Geographic cover, shot by McLain. 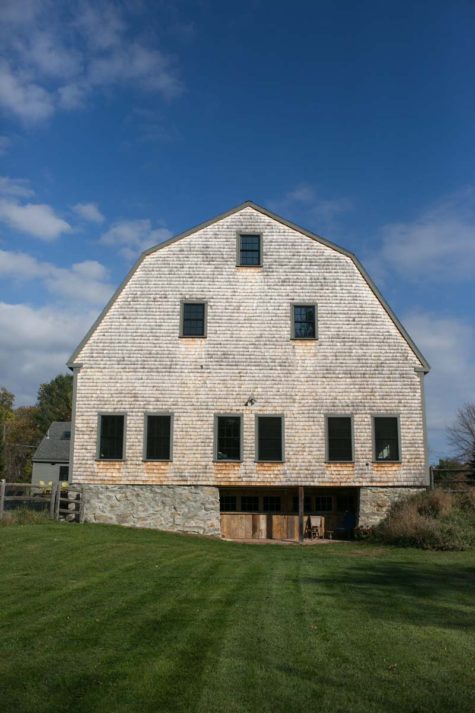 In the evening, McLain will often camp out in the alcove pictured here to watch the sun set while he chats with editors about his next assignment.