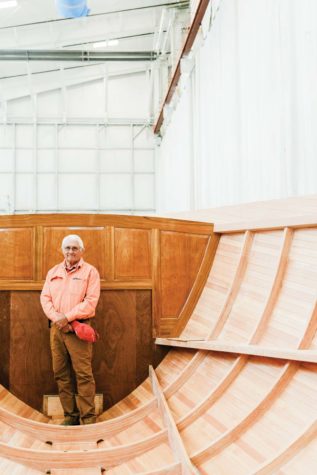 Cabot Lyman and his wife, Heidi, moved to Maine in 1978 with a plan to work in boatbuilding. At the time, Morse Boatbuilding Company in Thomaston was closing, so he inquired about renting space to work on a boat. When he found out the company had outstanding contracts to build two vessels, he approached the customers about taking over the contracts and bought the business itself, opening Lyman-Morse Boatbuilding. Since then, the company has launched more than 110 vessels. Lyman attributes the success to the quality of the vessels and his own bluewater cruising experience. After graduating from college, Cabot and Heidi spent five years sailing and skippering boats in the Caribbean and Mediterranean. “We had a lot of sailing experience, a lot of miles on the ocean,” he says. “That really helped sell our boats to customers. We could guide them as to what was right and what was wrong.” Lyman has completed more than 150,000 miles of offshore voyages, including three years spent circumnavigating the world with Heidi and their three sons, Alex, Drew, and Zach, on their 49-foot sailboat built at the yard. The company, now led by son Drew, took a significant step forward in 2015 when it purchased Wayfarer Marine in Camden, establishing a presence in the popular Camden Harbor. In 2016, the family moved beyond boatbuilding and opened 250 Main Hotel, a 26-room hotel in Rockland. “It’s important that the area stays vibrant,” says Lyman, pictured with Anna, a 65-foot cold-molded modern classic sailboat under construction. “Our customers like to come to Maine when we build their boats and be a part of it. It’s an important facet, that people like to come here.”