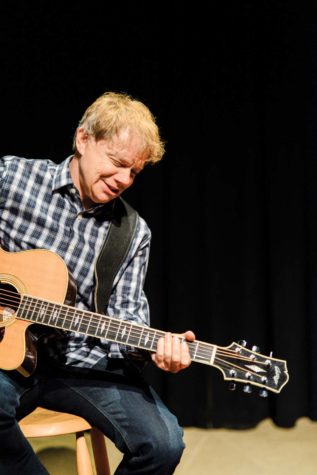 “I have never specifically strived to send a message in my work—only to tell a story,” says Cidny Bullens. In the artist’s lengthy career, he has received two Grammy nominations, sung backup vocals for multiple tours with Elton John, written a musical about North Haven with a Tony award-winning producer, and released eight solo albums, including one inspired by the death of his 11-year-old daughter, Jessie. Written in the two years after Jessie’s death from cancer, Somewhere Between Heaven and Earth includes performances by Bonnie Raitt, Lucinda Williams, Bryan Adams, and his elder daughter, Reid Crewe. “I could not have imagined that those ten songs—all moments in my grief—would touch bereaved parents and others all over the world,” Bullens says. Most recently Bullens has been performing his one-person show, Somewhere Between: Not An Ordinary Life, to audiences around the country. The show follows his journey through being a 70s rock-and-roll musician, getting married, dealing with the death of his daughter, becoming a grandparent, and his decision in 2011 to transition from female to male, changing his name from Cindy to Cidny. The theatrical production also includes songs from Bullens’s past and more recent work. “I thought, if I tell my story honestly, maybe whoever sees it would have greater insight into what it is to be a transgendered person,” Bullens says. “But ultimately, it’s a human story—about love, loss, and resurrection. Those things every human being has experienced.”