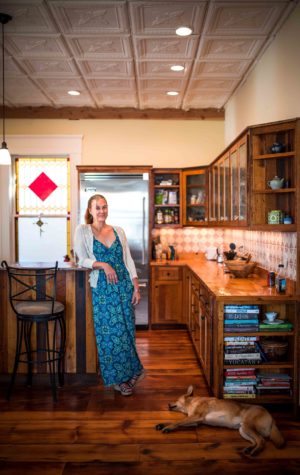 Kate Christensen‘s latest book is similar to her early work and at the same Tim nothing like it. The Last Cruise, released in July, is a return to Christensen’s novel-writing career, which took a back seat over the past several years as she she wrote food memoirs. “It feels good to have a novel coming out again,” she says, “but it feels good to have taken that break.”

During that period Christensen wrote Blue Plate Special and How to Cook a Moose, both of which “came out of my love of food and of Maine,” she says. Writing memoirs, which the Portland resident says she never intended to do, meant Christensen spent a lot of time looking inward and reflecting on her own life. The six novels she wrote prior to the memoirs were reflections on her personal experiences. The Last Cruise marks a new direction for the author by focusing more on social and political issues.

After How to Cook a Moose came out in 2015, Christensen became consumed by politics. She says an “apocalyptic” feeling she was experiencing following President Donald Trump’s election inspired her latest book. “It came out of a feeling of foreboding and despair, but I still tried to make it entertaining and a page-turner,” she says. “It was the hardest thing I’ve ever written.”

The Last Cruise tells the story of a Maine farmer who takes an ill-fated cruise to Hawaii on the ship’s planned last voyage. After researching numerous disasters that have happened on cruise ships, Christensen says she developed plot and theme ideas for her book. “It’s a metaphor for what’s happening in America right now,” she says. “We’re on a cruise ship, and everything is about to go wrong.” Cruise ships are “a microcosm of the financial inequity and corporate cynicism I see in American,” Christensen says.

Despite its gloomy inspirations, writing about the current social and political climate has been a way for Christensen to find hope. With everyone stuck on the ship, the only way to navigate disaster is as a team. Christensen says the same must happen in the country. “It’s high time we all start thinking communally,” she says. “We need to connect as much as we can. We really are all on this planet together.”