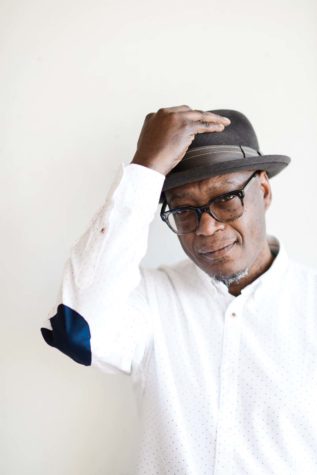 Daniel Minter is a multidisciplinary artist working across different mediums. He is a painter and sculptor who is an illustrator at heart. His work is often symbolic and explores broad concepts that are linked to social justice issues, often while weaving in spiritual themes from the African diaspora. “There are difficult stories to tell that are easy to not talk about. Many involve racism, displacement, and bias historically experienced by most people of African descent,” Minter says. “Artwork can provide a starting point for looking deeper, by first inspiring the emotional response to the aesthetics.” Minter has illustrated 11 children’s books, including Ellen’s Broom, which won a Coretta Scott King Illustration Honor. He’s drawn to children’s books because they allow him to insert something of his own story in the artwork. “It is important that children sometimes see characters that look like them and characters that look different from them in the books they read,” says Minter, who is represented by Greenhut Galleries in the Portland area and Soren Christensen Gallery in the New Orleans area. He cofounded and created the bas-relief sculptures that mark the Portland Freedom Trail, a self-guided walking tour of notable sites related to the Underground Railroad and abolitionist movement. “The work I do is my way of making sense of the world through the lens of my people,” Minter says. “The work is also a way of engaging the community and giving them a window to understanding who I am enough to see that my work also carries a reflection of them.”