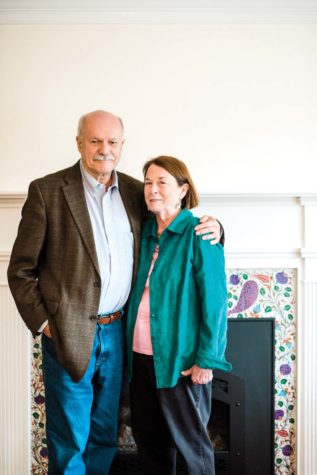 David and Kaye Flanagan note that while civic engagement is declining around the country, Maine has maintained a strong sense of civic duty. Exemplifying the local work ethic, the Flanagans have made it their mission to contribute to the greater good. David has led several organizations that have stimulated Maine’s economy, from controlling costs and improving efficiency as CEO of Central Maine Power Company to to assuring affordable and accessible higher education as president of the University of Southern Maine, where he led a successful effort to balance the budget and restore financial stability. Outside Maine, he also led an investigation regarding Hurricane Katrina for the United States Senate Committee on Homeland Security and Governmental Affairs, underthe direction  of Senator Susan Collins. Now a director of the Harold Alfond Foundation, he says that he “deeply admires the Alfond family’s commitment to funding transformational changes in health care, educational opportunity, and economic development.” InMaine, Kaye found the opportunity to combine her two careers, nursing and teaching. At Catholic Charities, she worked to create a new coordinated program that provided home care support services for senior citizens, and she later became the director of the organization’s home care agency, where she instituted a community mental health program. With David as campaign co-chair, she raised $1.4 million for a new facility for the Children’s Center in Augusta, a preschool program for children with special needs. “Helping individuals and families through illness and other crises is very gratifying,” she says.