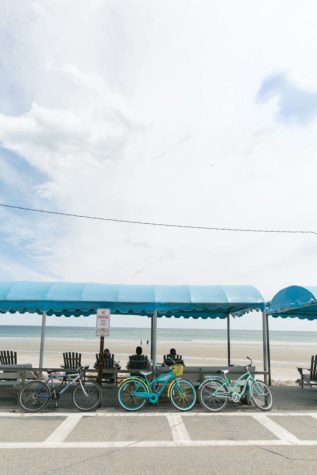 Ogunquit is a popular resort town in southern Maine with 90 percent of its shoreline open for the public to enjoy. 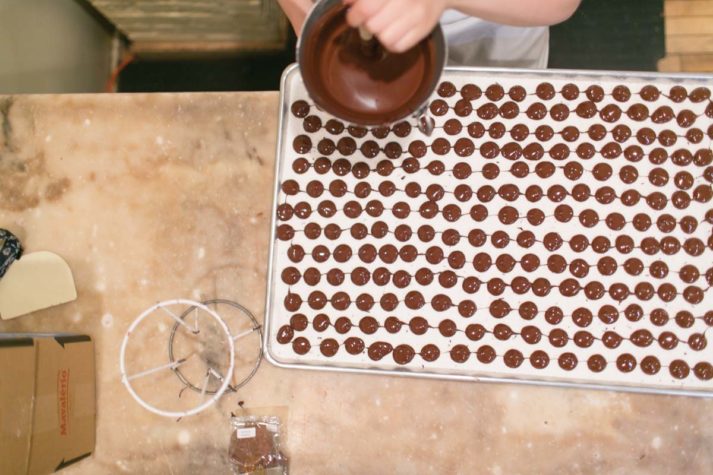 Hand-dipped chocolates in a row. 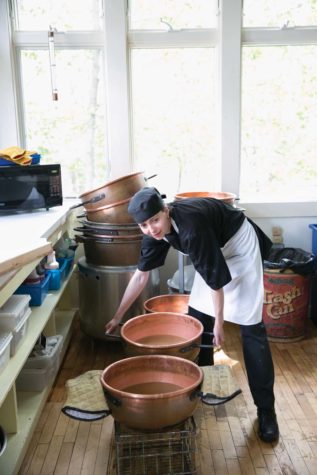 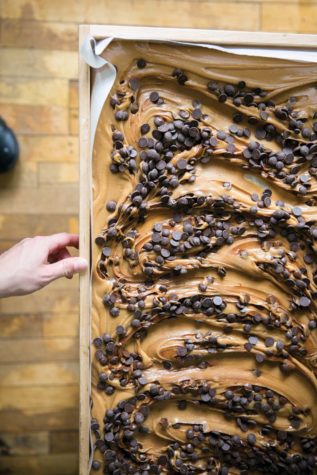 Waiting for the fudge to cool. 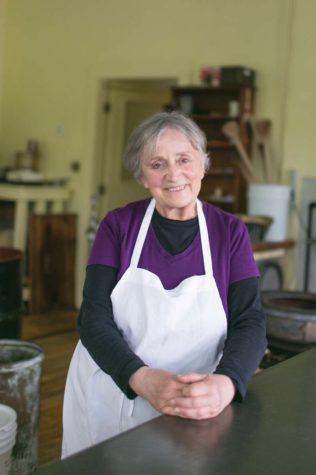 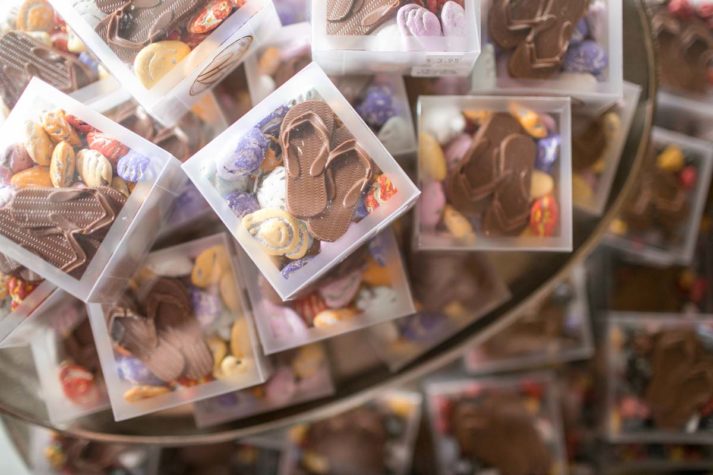 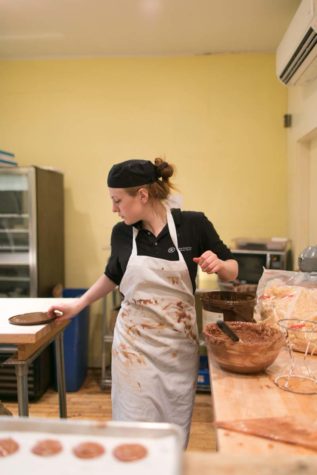 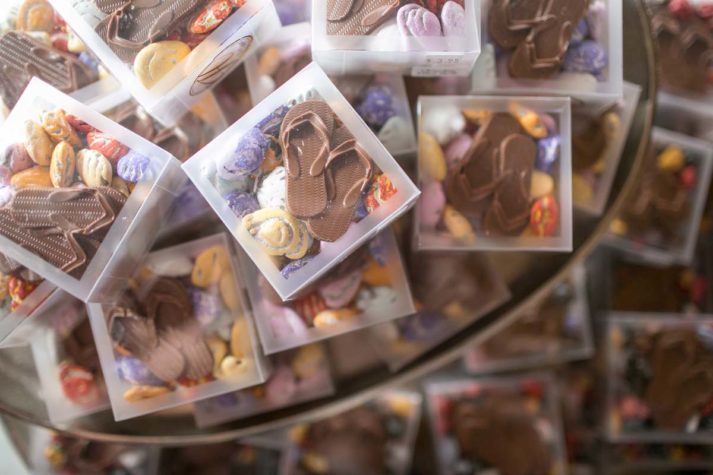 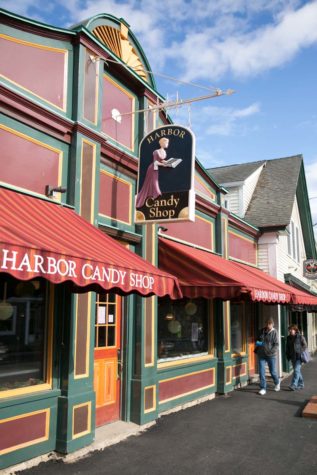 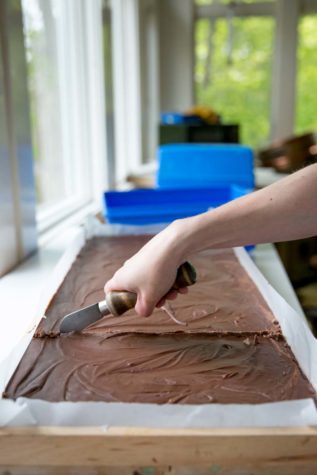 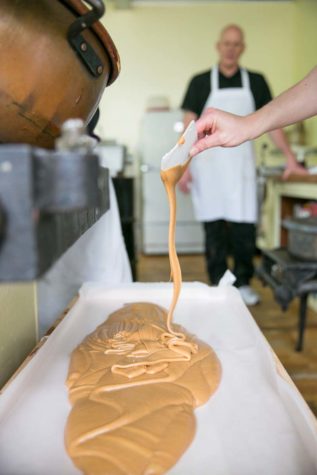 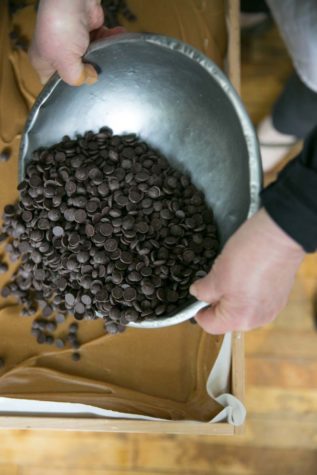 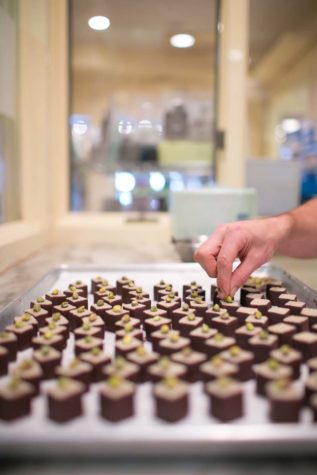 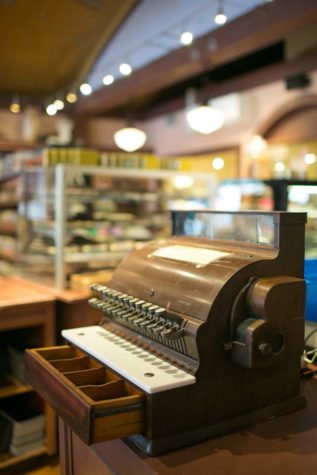 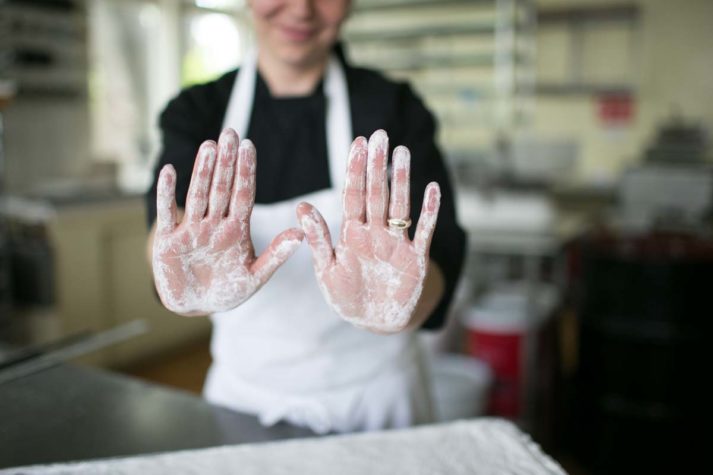 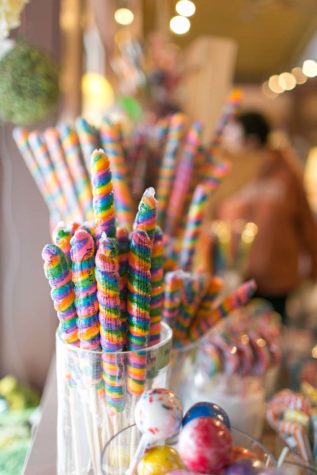 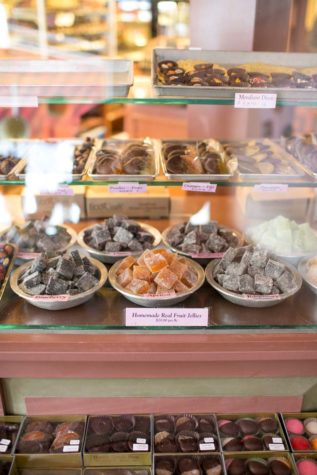 Ogunquit is a popular resort town in southern Maine with 90 percent of its shoreline open for the public to enjoy.

Driving along Route 1 in southern Maine, Ogunquit’s downtown is a welcome surprise. Chain restaurants are replaced by bistros with roomy porches, shrouded in flowers and salted with twinkly lights. Brightly colored buildings line the brick sidewalks, packed in the summertime with shoppers sporting Maine sweatshirts, sunburns, and ice cream cones. Even among so much cuteness, Harbor Candy Shop stands out for the smells emanating through the doorway.

Walking into the shop, the initial gulp of air is almost (almost) enough to satiate an acute cocoa craving. The ceilings are patterned with ornate gold tiles and dripping with antique light fixtures. There are bins of saltwater taffy, rows of colorful lollipops, and countless bow-tied boxes full of chocolates. And there are endless cases of handmade candies -pyramids of truffles, clusters of roasted nuts bound by milk chocolate, bite-sized dark-chocolate- coated morsels studded with tiny peels of candied orange and freeze-dried raspberry drupelets. It’s sensory overload in the best way. And that’s before you even take a bite.

The story of Harbor Candy begins in 1956, the year a teenaged girl named Jean Sotiropoulos from Haverhill, Massachusetts, got a summer job working at a restaurant in Ogunquit. Before she left for Maine her father asked her to keep an eye out for a storefront near the beach where he might sell his homemade fudge and confections to the crowds that came through. Young Jean had hoped to have an adventure of her own in Maine, but when she spotted prime retail space for rent, the dutiful daughter gave her dad a call. For the rest of that summer, Jean’s father, George Sotiropoulos, made fudge and saltwater taffy in a small manufacturing space in New Hampshire and her mother, Lillian, made a daily bus trip from Massachusetts to Maine to run the Ogunquit store. Batch by batch, the business took off, and the following year the whole family migrated north for the summer. In 1960, Harbor Candy moved to its present location in the former A&P Market on Ogunquit’s Main Street.

After attending college, teaching, and traveling in her twenties, Jean decided to take the business over from her parents in 1972. She had always loved candy, wanted to work for herself, and was inspired to create the kind of shop she had often stumbled upon in Europe—one in which every little detail had been attended to; a candy shop that felt warm rather than sterile, welcoming and one of a kind. She worked out a fair sale price with her parents and, a few years later, when the landlord put the building up for sale, Jean bought that as well—no small feat for a young woman in the 1970s. In addition to candies of the highest quality, she filled the shop with beautiful things, like an old bureau from a French pharmacy and cuts of marble from Blue Rock Maine. Jean also made a point of tying every bow around every box just right, so that when a customer tugged at one end, the knot unraveled all at once. These are the little things that set Harbor Candy apart, the reasons why the business grows every year.

“It’s the result of her attention to detail,” the head chocolate maker, Joe Howard, tells me, out of earshot of Jean, while filling candy bar molds with silky ladlefuls of milk chocolate on the morning of my visit. (In the course of that day, he made 21 of the 7,000 bars the shop will sell between Memorial Day and Labor Day; from Thanksgiving to Christmas, Harbor Candy Shop sends out over 200 boxes a day to homes around the country and the world.) Howard, who has been working at Harbor Candy for 15 years now, still uses many of George Sotiropoulos’s recipes from 1956, making candy with the best freshly roasted nuts, eggs from local hens, pure vanilla butters, and dairy cream. “It’s also Jean,” he says. “She’s the kindest person I’ve ever worked for.”

Here’s what else I learn about Jean: to hear her describe a Lenôtre muscadine truffle is almost as delicious as tasting one—“It’s about the cream,” she explains in a careful voice that could be misconstrued as luxuriant if you’re unfamiliar with her penchant for accuracy. “The chocolate is melted with warm cream to give it a certain smoothness” she says, and the cherry kirsch and Grand Marnier comingle to produce “a very strong message of liqueur.” She is nostalgic for the past, and delightfully candid about the not-so-romantic side
of running a candy shop (“I hate being in the kitchen,” she says on more than one occasion). She is open and passionate about causes she cares deeply about—especially animal welfare. She regularly fosters German Shepherds, and devotes time, energy, and money to over a dozen local shelters and national nonprofits helping animals. She is a petite woman with fantastic eyes that fade from blue to green to hazel to brown. Her voice is quiet, her Massachusetts accent is thick, and, as she leads me through the shop, she talks with her hands, pinching the bib of her apron as though she might pluck from it just the right words to explain the elaborate tempering process one must master to make chocolate as shiny and delicious as Harbor Candy’s.

The shop’s workspaces, some of which are visible through the indoor windows at the back of the storefront, are lovely. They contain sturdy-looking European melting and cooling machines, cauldrons of warm chocolate, worn butcher block tables, old marble countertops, and containers filled with spices and molds of many shapes and sizes. If you look closely you’ll see smudges of chocolate all over the place, including the forearms of the candy makers. At Harbor Candy Shop they still cook with hand-fused copper kettles and bowls heated over 100-year-old gas stoves, and use a refrigerator from 1930—not out of fidelity to some kind of old-fashioned aesthetic, but because the appliances still work. Jean and the new cook, Meggie Borberg, get to work in the kitchen, pouring a caramel-colored fudge mixture from a copper pot into a tray of peanut butter and chocolate chips. The fudge falls in folds, which Jean smooths over with a large metal spatula. “People talk to me like I know everything, and like I know what I’m doing,” she says with a giggle while she works, “but I’m still figuring it out.”

Jean says there’s “something basic, something primal about watching someone work with their hands.” She recalls watching her father cook at their home kitchen and at the store, and the sense of peace it gave her as a girl. In the chocolate room, we stop to observe Jeff Page—who grew up in Ogunquit and remembers riding to Harbor Candy for treats as a boy—as he hand-dips wafer cubes in a bowl of shimmering dark chocolate. He taps the sides of a wafer with what looks like a lobster fork to make sure each side is evenly coated, holds the bite-sized cube over the bowl to allow excess chocolate to run off, and sets it down on a tray lined with parchment paper. He will repeat this several dozen times, and later he will glue bright green pistachios (Jean buys from a supplier willing to pick out the greenest ones especially for her) to the top of each with a dab of melted chocolate. His technique is masterful. He wastes not one drop. And yet despite the consistency with which he works, it’s the subtle differences between each piece that make the candies so special, that flag them as handmade.

Back in the store, I overhear a first-time customer say, “These chocolates are like art.” The woman holds her hands to her cheeks, in awe of the bounty and the beauty of each unique piece. “I won’t be able to eat them,” she says, her voice flecked with genuine concern. From behind the counter, Avi Tzankova smiles beneath her fitted black cap, her hand held in mid-air, ready to pluck more chocolates. The customer leaves with a full box, tied up in one of those perfect Harbor Candy bows and placed with care into a crisp paper bag. “I hear that all the time,” says Tzankova. “I think she’ll manage.” 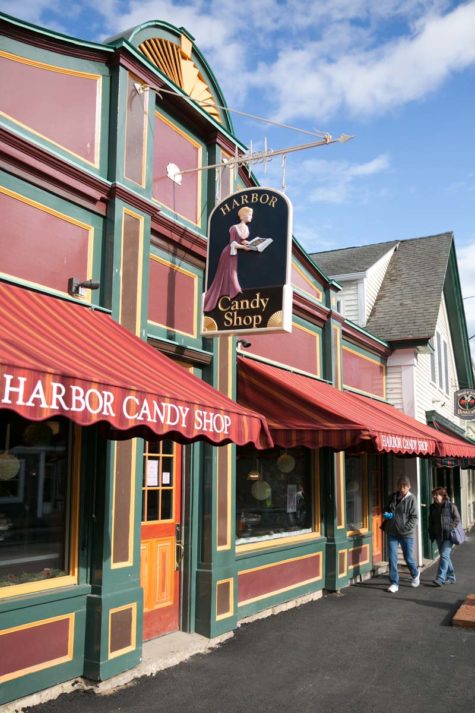 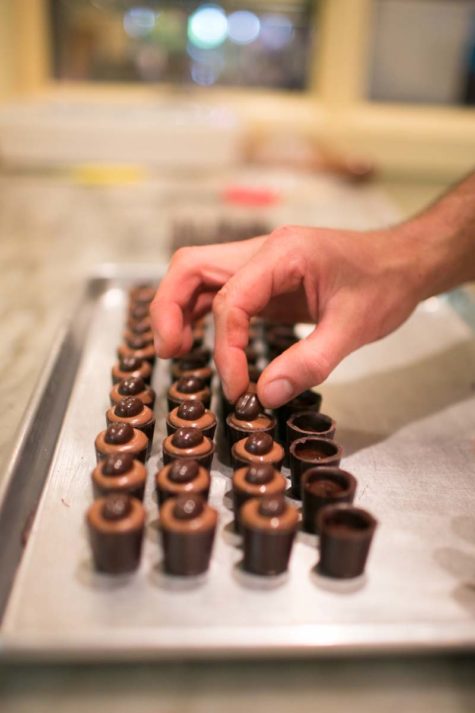 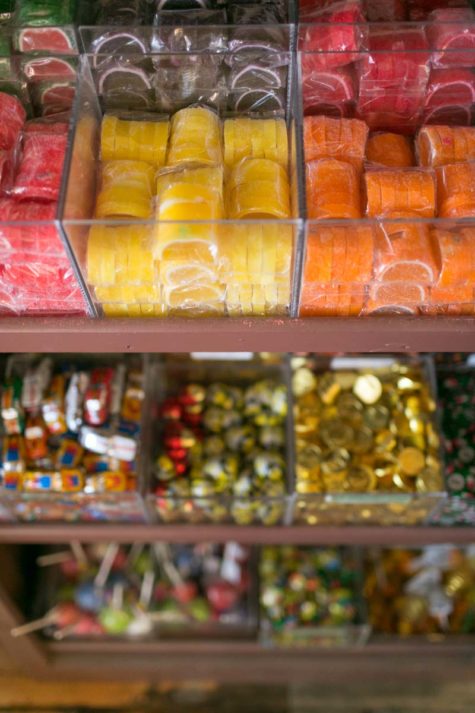