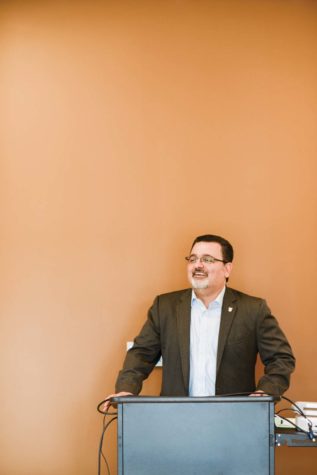 Dr. Melik Peter Khoury was the first member of his immediate family to get a degree beyond high school. Growing up in West Africa, he says, higher education was a privilege. “Once I had achieved my bachelor’s degree I realized I wanted to dedicate my life to making sure that anyone who wants an education has an opportunity to get one,” Khoury says. “And now, as the leader of America’s Environmental College, I’m finally at a point where I can help others break through their own barriers and realize their own educational goals.” He first fell in love with the statewhen he attended the University of Maine at Fort Kent. As he became more aware of the environmental situation of the state, the country, and the planet, he says it became clear that Maine has a strategic advantage, with three climate zones and an abundance of natural resources. “What better place to become the hub of environmental science research and education than Maine?” Khoury says. Along with developing a vision for higher education that responds to pressing environmental and social problems, Khoury sees an opportunity for environmental education to be an economic driverfor the state, encouraging some of the millions of Maine’s annual visitors to stay full time and pursue education in the environmental sciences fields. During his succession from senior vice president for external affairs to executive vice president to chief academic officer, and, finally, president, he oversaw significant institutional gains, including three consecutive years of record enrollments and over 20-percent enrollment growth.