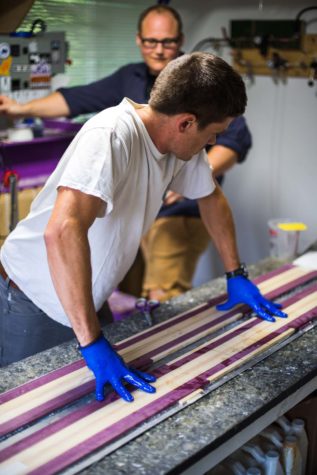 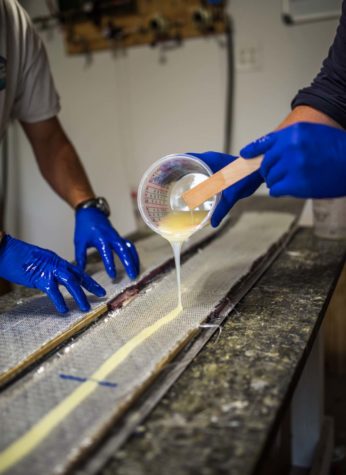 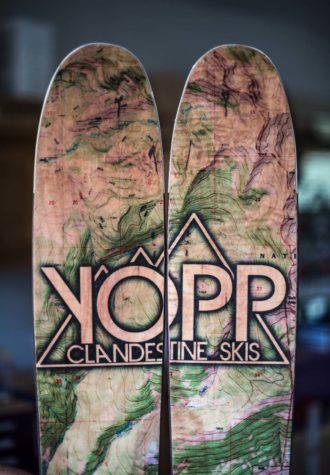 When Toby Winkler and Jake Bracy first cut apart skis to see how they were made, they didn’t expect the experiment to turn into a career. The cousins wanted to build their own skis and were curious about how it was done. It started as a hobby and  organically progressed into a business,” Win kler says. Both graduated from Maine Maritime Academy with degrees in engineering  and combined those skills with their lifelong  love of skiing to create their business. They  started off eight years ago in York in a family wood shop called Ye Olde Perkins Place, which was owned by their great-grandfather. When the business grew and relocated to Bethel, the name YOPP Skis was adopted in honor of its origins.

Winkler and Bracy make their custom skis with a unique wood for the cores. Purple-heart, a tropical hardwood, is oily and dense. Its properties allow the cores to be extended to the edge of the skis, while most other skis use hard plastic as a seal. “It prevents moisture from entering the ski, and it’s also really dense so it contributes to the torsional rigidity of the ski,” Winkler says. The wooden cores resist twisting and also allow Winkler and Bracy to honor their great-grandfather’s craft in their modern ski designs. The skis also have layers of fiberglass, carbon fiber, rubber, and tiger maple.

All YOPP skis are built in the Bethel shop, and it takes about six hours to make a pair. About 75 percent of customers choose to customize their skis, Winkler says. They can specify the length, width, and flex and the graphics; all of the ski bottoms are purple, a nod to the core material. Bracy works with customers on design and does all of the graphic design work himself. “People come in and are super jazzed up about it,” Winkler says. “They build their skis kind of like a sandwich.”