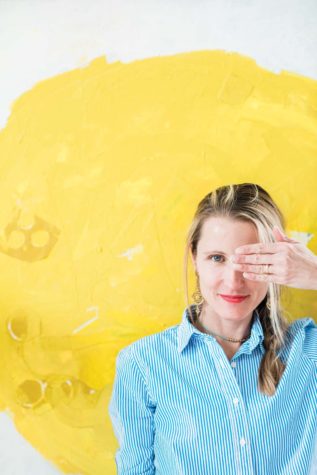 Featured in more than 45 magazines around the world, Erin Flett’s vibrant, graphic prints have made a resounding impact on the world of design. First a graphic designer for businesses, Flett branched out into freelance work when she was four months pregnant. “I wanted to make things that would brighten someone’s life by surrounding them with mindfully made, beautiful things,” she explains. She began creating her prints in her basement and then expanded into the Dana Warp Mill in Westbrook. Since then, her company has grown to include a small staff, and she values the local production of her work. Flett’s recognitions are numerous: Better Homes and Gardens selected her as a top “Stylemaker” in 2016, and in the same year she won an Etsy competition in which she pitched her products to several large companies, winning two of the six available prizes. She was also named a Designer to Watch by HGTV. Recently she produced over 200 linen hand-printed pillows for the Portland Harbor Hotel. Despite international accolades, Flett continues to be inspired by Maine. “As I grow, my design grows, but it is all rooted here in Maine in every facet,” says Flett, who is pictured in front of her painting, Mother Moon. “This state has always spoken to me, and I am inspired every day just living here.”