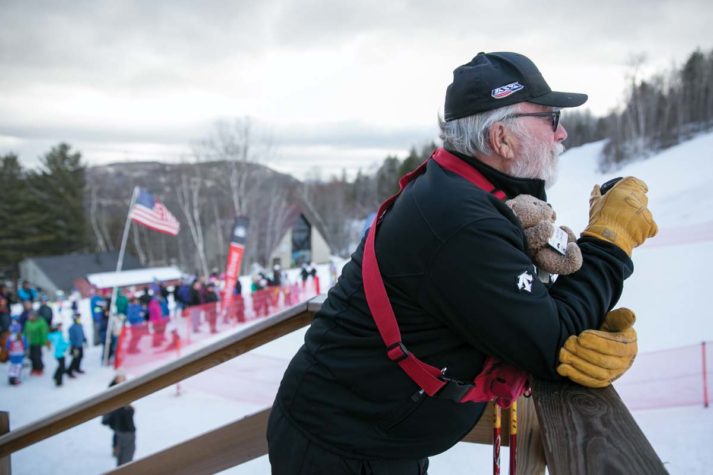 Barry “Bear” Bryant, the “eyes and ears” of Sunday River’s Competition and Events Department, looks out over the race course on Barker Mountain, walkie talkie in hand. Bear Bryant up on his perch watching skiiers race. 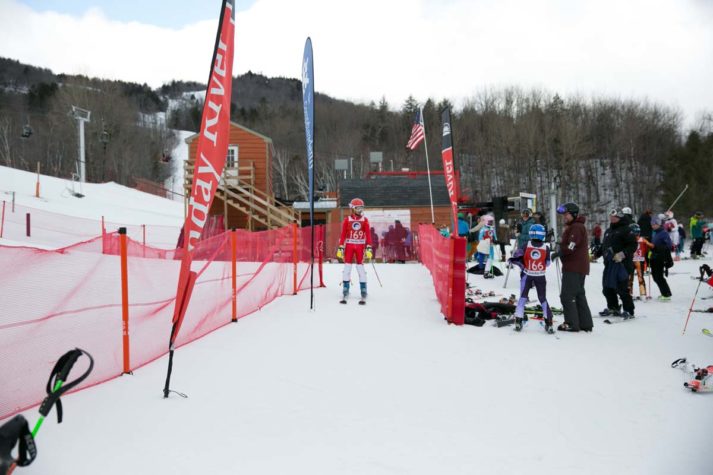 A racer cruises between the gates, ready to join friends and family at the base of Barker. 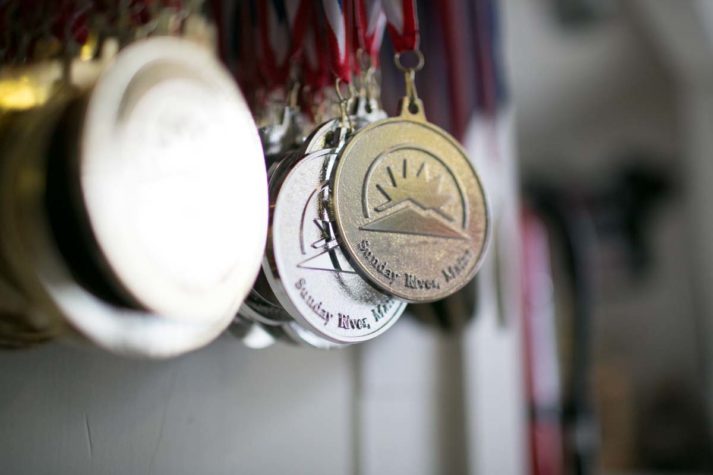 Sunday River’s competition center is the oldest building on Barker Mountain and it smells like it— sweat-soaked wool, spilled beer, and wet carpet predominate. The walls are nicked by ski boots and covered with jerseys and medals, and the offices are half workspaces, half gear closets. If you’re a ski racer, this place looks and smells like home.

If you’re Barry “Bear” Bryant, this place is home—at least for the winter. Now based in Fort Myers, Florida, the New Hampshire native calls himself a “snowflake” rather than a “snowbird.” When the white stuff starts to fall in Maine, he makes his way to a 30-foot-long motorhome at Sunday River, parked with permission in the Grand Summit Hotel parking lot and fondly referred to as the “Bear Cave.”

Bryant’s official title is competition advisor and consultant, but when I ask him he says with a grin, “I’m the Grand Pooh Bear.” He retired from his post as chief of race operations in 2014, but the world-class ski racing official remains the eyes and ears of Sunday River’s Competition and Events Department. Settled in a chair outside his office in the Competition Center, waiting for the day’s race, he does look impressive. Bryant’s friendly features are trimmed out in a neat silver beard, and his chest is puffy with warm layers. Ski boots have a way of turning even the most graceful among us into hulking figures, and with Bryant it’s no different—despite the fact that he’s probably spent more time in ski boots than regular ones.

Bryant received his first pair of skis and boots in 1948 from none other than Hannes Schneider, the Austrian-born ski instructor known as the father of modern skiing. After escaping Nazi Germany in 1939, Schneider resettled at Cranmore Mountain Resort in Bryant’s hometown of North Conway, New Hampshire, where he became something of a mentor to young Bryant. “They had steel edges and bear- trap bindings,” Bryant says, recalling that old equipment. “They were six feet, nine inches, and I was just 13 years old. Hannes said, ‘You’re strong, you can do this.’ And I did.”

In his senior year at Kennett High School in Conway, Bryant won the Eastern Junior Championship, solidifying his reputation as one of the best young skiers in the country. “Ski racing really made me aware that I was capable of something,” he says. “I came from a broken family. I didn’t have a mom and dad; I was being raised by my grandparents. I was kind of a wild young man.”

Bryant’s resume is long and peppered with Eastern ski resorts and big-name companies like Lange, Hart, and K2. After serving as a flight simulator operator in the U.S. Air Force and attending college, he taught skiing in the winter and worked on trail crews in the summer. Afterwards, he traveled around Europe and the United States with the Professional Ski Instructors of America, and then managed ski school programs throughout New Hampshire and Vermont. He tested skis, worked in sales, and, while employed with K2, tagged along with the U.S. team to the 1980 Olympics.

For the next 30 years, Bryant worked his way up to become one of the most highly regarded ski race officials in the country. He ran the Alpine Junior World Ski Championships at Sugarloaf as chief of the course in 1984, and did technical delegate work for national championships and World Cup events in the United States, Canada, Japan, and Europe. From 2000 through 2015 he was the start referee at the Birds of Prey World Cup at Beaver Creek in Colorado.

He’s been at Sunday River for over ten years now. In 2010, when he first expected to retire, the Competition and Events Department threw a “Bearfest” to celebrate his retirement. Six years later, he still makes it to the mountain every day in the winter, and the Bearfest has become an annual event and something of a running joke. “The best thing would be for the good Lord to decide it’s time for me to go when I’m on the side of the mountain,” says Bryant.

The GACP Carnival (a Gould Academy- sponsored slalom race for young skiers) is getting underway, and Bryant readies himself for the cold. Over his coat he wears a strappy radio pack with pockets for walkie-talkies; a small stuffed bear protrudes from his chest. He carries his skis up a steep pitch of ice, snaps in, and skates to the bottom of the course, where parents and kids in alpine race suits are watching the racers descend.

“How’d ya do?” Bryant asks pink-cheeked Henry Harkins, a 14-year-old student at Gould Academy. Bryant often dissuades parents from making this kind of inquiry of their own children. “Let them tell you what kind of day they had,” he’s known to say. But Bryant is neither parent nor competitor. His questions make the kids feel seen.

“My time was good but I don’t think I skied well,” Harkins answers. “The snow is dodgy today.”

Bryant nods. On a ski race course, the quality of the snow must be the same from start to finish, which usually means it’s fairly icy right off the bat. Bryant gives Harkins a pat on the back and makes his way to the score boards.

“He’s awesome,” Harkins says of Bryant. “He’s really popular. He knows everything about ski racing. You just have to have respect for guys like that.”

Watching Bryant’s eyes dart around the race course, one starts to get a sense of how much it takes to put on a safe and organized ski race. The department consists of a dozen people, and as many as 30 volunteers—mostly parents—pitch in to pull off about 75 events per year. Bryant says this spirit of teamwork and camaraderie sets Sunday River apart. “It’s a family-oriented, user-friendly kind of place,” he says. “It’s got every kind of terrain you could possibly want, and it fills a need for so many people who want to be outdoors and together with their family.”

Ski mountains breed and harbor some of the best characters, and Bryant is one of them—all candor and optimism, ruddy cheeks and sparkling eyes. In a life full of ups and downs and personal and professional triumphs and failures, skiing has remained a constant for him. That’s why he loves racing: it teaches young people that the roller coaster is survivable. “There will be some disappointments,” he says, “but the thing is, you get over disappointments.” And in the meantime they’ll fall in love with fresh air and winter and the feeling of standing on top of a snowy mountain knowing that for the next 20 or so minutes their only blissful job is to ski down it.

“Skiing is a lifestyle,” he says, “and as far as I’m concerned it’s a wonderful one.”

Bryant surveys the scene and makes his way through the crowd, petting dogs and chatting with parents, checking in with the racers. After an hour or so, he’s seen what he needs to see. Back in his office, there is a photo of a silver-bearded Bryant in his signature black outerwear, gripping a pole at the start gate at Lake Placid, waiting to give his blessing
for the race to begin. Below that is a scrap of paper with a quote that reads, “And lo, He looked down over the course… and it was good. So it was.” And so it is at Sunday River. 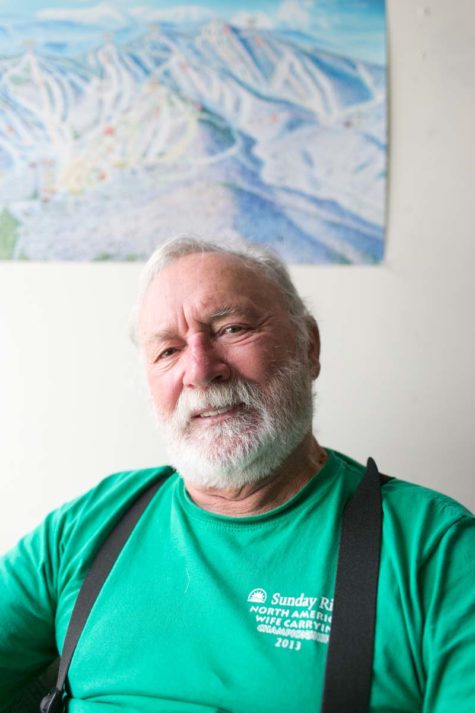 Bryant at the office, where he tends to keep his ski boots on and his skis nearby. He’s been skiing since he was a small boy in North Conway, New Hampshire. Bear Bryant portrait at his office at Sunday River 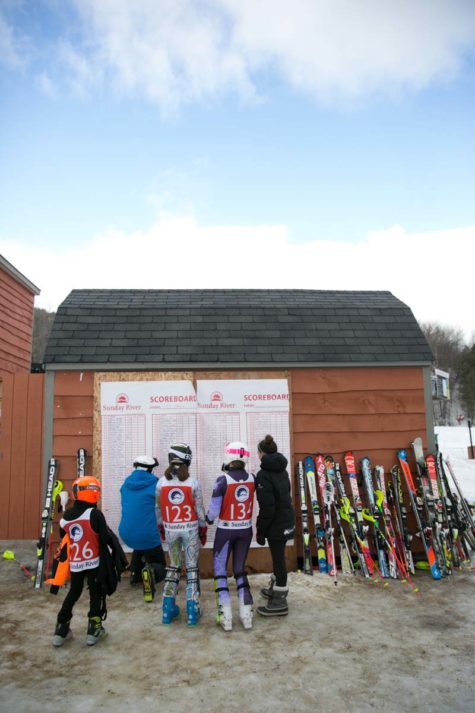 Young ski racers scan the chart, checking out their times and seeing how they measure up with other competitors. checking race timmes at sunday river 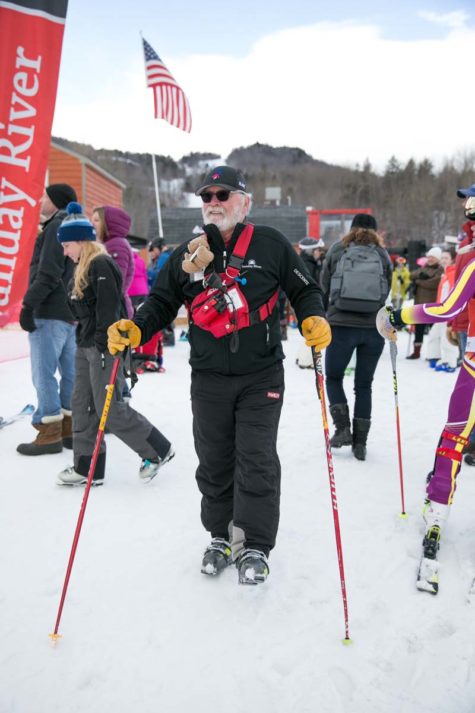