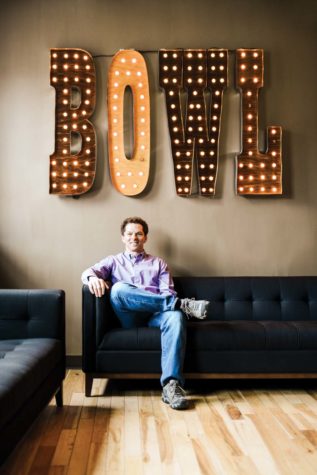 In Justin Alfond’s career as politician, entrepreneur, and philanthropist, he has concentrated his efforts on helping the state and its residents reach their potential. “My parents and grandparents taught me to believe in myself and my community,” he says. “Every person has a talent and deserves an opportunity to succeed.” Alfond served in the Maine State Senate for eight years, becoming Maine’s second-youngest Senate president in 2012. In 2006, as director of the Maine League of Young Voters, Alfond and the organization worked to create what became the Opportunity Maine program, which provides tax credits to college graduates in Maine paying off student loans. He cofounded Full Plates Full Potential, which brings together businesses, chefs, nonprofits, and government to collaborate on solutions to end child hunger in Maine. In his entrepreneurship work, Alfond has invested in Portland’s Bayside neighborhood. He opened Bayside Bowl in 2010 and recently completed a $3.5 million expansion. Nearby, Alfond helped establish Fork Food Lab, a coworking kitchen for food entrepreneurs. “Every part of our state is intertwined and interdependent,” Alfond says, “and we have to embrace this by investing in Maine’s competitive assets, raising the bar, and holding each other accountable.”