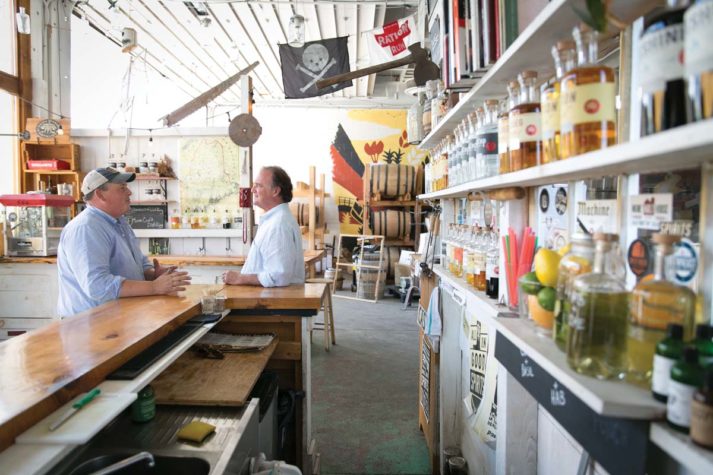 FitzGerald talks with Davidson, who says he had the confidence to make and brand his spirits, but it wasn’t until FitzGerald got involved that he overcame his reluctance to deal with the numbers side of the business. Des Fitzgerald with Luke Davidson at Maine Craft Distillers

In late 1976, a young man came to Maine with an education, a big idea, and little else. Des FitzGerald had a biology degree from Harvard and was fresh from a year of graduate study in aquaculture at the University of Washington. More importantly, he had a 24-year-old’s sense that life held endless promise, especially in rural Maine, where the raw beauty and cheap acreage were drawing fellow idealists. He bought some land on Kendall Brook, a tributary of the Ducktrap River in Lincolnville, and in the summer of 1977 set about farming trout, planning to sell the fish to local restaurants.

The early years of Ducktrap River Fish Farm did not go entirely smoothly. Predators snatched the growing trout out of the pens, and like many entrepreneurs, FitzGerald struggled to develop his dream into a viable business. “I was blissfully ignorant,” he says, talking with me in the bright, comfortable family room of the sprawling house in Camden where he and his wife, actress and artist Lucinda Zeising, raised four now-grown children.

What kept him going was a conviction that his future lay in fish, and a willingness to change direction. FitzGerald started experimenting with smoking fish, eventually making it the focus of his entire operation. At about the same time, a friend of his launched a mussel farm, and Ducktrap became the first company in the country to smoke mussels, one of more than 20 products made today at the company’s 45,000-square-foot facility in Belfast. “At the end of the day the fish-farming site in Lincolnville was limited in size,” he says. “The growth, interest, and excitement were in the smoked-seafood side of the business.”

That willingness to pivot, learned at the first of many startups in which FitzGerald has been involved over the course of his long career, is a quality he now emphasizes as the Entrepreneur-in-Residence at the Maine Venture Fund. The mission of the venture capital fund, created by the Maine Legislature in 1995, is investing in Maine companies that show potential for high growth and public benefit. FitzGerald came on board in 2012 and now advises eight of the 26 companies in the fund’s portfolio, including Maine Craft Distilling in Portland.

Much like his now-mentor, Davidson launched his distillery in January 2012 with a dream to make whiskey, but few business skills. “My problem at the time was the numbers,” he says. “I knew how to make the products and brand them, but the numbers were a huge challenge and I hated them, so I just didn’t deal with them.”

Davidson’s father, who had worked at Ducktrap in the early years, asked FitzGerald to look in on his son’s business, and in May, MVF invested in Maine Craft Distilling. “Des showed up and he was everything I hoped, a remarkably calm and thoughtful guy that said the things that needed to be said,” says Davidson. “He really pitched this governance thing, which I was so wanting.”

Establishing a board of directors is something many small and even medium- sized businesses don’t consider a priority, says FitzGerald, who “blundered into” creating a board at Ducktrap—“the smartest thing I ever did,” he says.

“Part of my job at Maine Venture Fund is to help companies seed their boards with really qualified folks,” he says, citing the talented pool of business people in the state, some of whom have retired here from top companies around the country and still want to be involved.

Businesses that secure financing from the venture fund are required to include a member of the organization on their boards, a condition Davidson happily embraces. “In a board setting, a room full of Type A people, Des has a way to command a presence that’s not condescending, not threatening, and he cuts through all of it by quietly asking questions and presenting the facts,” says Davidson. “He’ll ask a question and listen to the whole answer. Nobody does that. And he’ll ask another question that helps you answer the original question even better, and he’ll follow that to the ground.”

FitzGerald also sits on the aquaculture board of FocusMaine, a nonpartisan initiative launched in January to help grow the state’s economy. A study commissioned by the group identified three industries to emphasize: aquaculture, agriculture, and biopharmaceuticals. “I’m a little fish- centric,” says FitzGerald, who counts fly fishing among his few leisure pursuits and believes “the potential is still huge” for aquaculture in Maine, even after his own problematic experience.

In 1999, FitzGerald sold Ducktrap to Continental Grain, which owned Atlantic Salmon of Maine, then the largest salmon farm in the country. “They said, let’s create a holding company that combines Atlantic Salmon with Ducktrap,” he explains. “I became CEO of that company (ContiSea) right around the time when salmon farming went from being a conservation darling to really in the crosshairs of environmentalists. We found ourselves on the opposite side of the table from environmental groups whom I had been working with for years.” This was not a place the entrepreneur who once chased raccoons and owls away from Ducktrap’s baby trout ever expected to be.

FitzGerald left ContiSea, which subsequently closed Atlantic Salmon, once a company boasting $50 million a year in international sales. He had turned 50, and decided it was time to branch out. With several partners, he established a land- based wind development company, Dirigo Wind, in 2006. He also followed through on an idea that had been kicking around in his head for eight years, launching BlueMarvel, an enterprise that places high-definition video cameras in places of natural beauty, such as a watering hole for elephants in Africa, to create what he calls “a picture window with sound.”

Both companies come up when I ask FitzGerald about his experience with failure. “I do believe in the adage that you learn more from your failures than your successes,” he says. Even though they believed in the potential of wind power, he and his partners eventually folded Dirigo Wind, feeling that the timing wasn’t right. BlueMarvel is still in business, producing experiential nature videos used primarily in healthcare settings, but FitzGerald is no longer involved. “That experience taught me that just because an idea persists in your mind for a long time doesn’t mean it’s viable,” he says. “You have to be aware of what’s over the horizon.”

What continues to drive FitzGerald is attracting people to Maine—and not just after they’ve been successful in business elsewhere. “I can’t imagine a better place to raise four kids,” he says. Only one of his children, Ryan, is still in Maine. He recently bought the Portland-based yarn and knitting business Quince and Co. from his mother, FitzGerald’s first wife Pam Allen. “But I don’t know if we’ll ever see any of the other three here permanently.”

FitzGerald’s oldest child, Caitlin, is a well-known actress living in New York City and currently starring in Showtime’s Masters of Sex. Caitlin and Ryan’s half- brother Alex works in social media, “doing the urban millennial Brooklyn thing,” says FitzGerald. His and Lucinda’s youngest son Cooper, is a recent college graduate and the “youngest fellow ever” at Kiva, a nonprofit that organizes microloans in developing countries.

“I would like to have Maine be a place for kids to come back to, to make a living and raise a family, as opposed to a place
to vacation with family,” FitzGerald says. “And ‘from away’ should go away. May that phrase be chased from every corner of the state.”

Both Des and Lucinda are tightly woven into the social fabric of Camden. They have been involved in the Camden International Film Festival since its inception, and also contribute to the Camden Conference and Meals on Wheels. Downtime is spent paddling the St. George river—Des in a canoe, Lucinda on a paddleboard—or at their cabin in Jefferson, where Des maintains a large vegetable garden.

“For some reason the word retirement doesn’t sit well with me,” Des responds when I ask about his future plans. “As long as someone will have me, I think I’ll work at least part-time and stay busy. I’ve got three sons who all appear to want to be in business; we’ve kind of fantasized about doing something together. That would be really fun.” 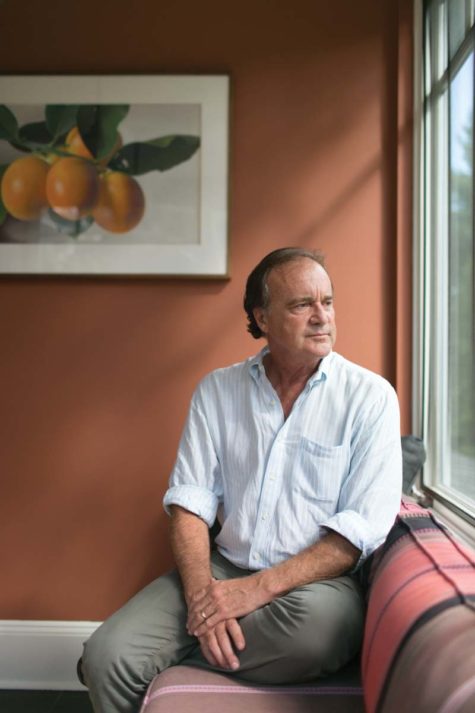 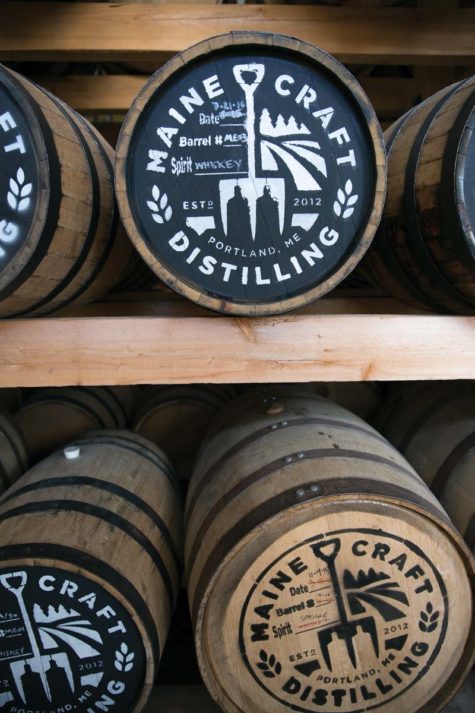 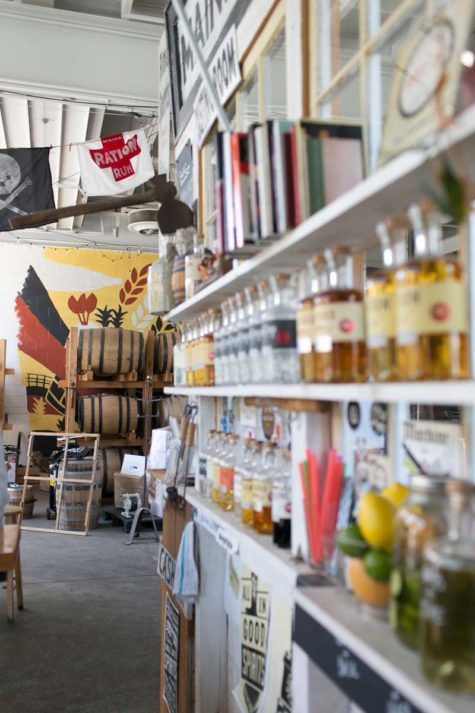 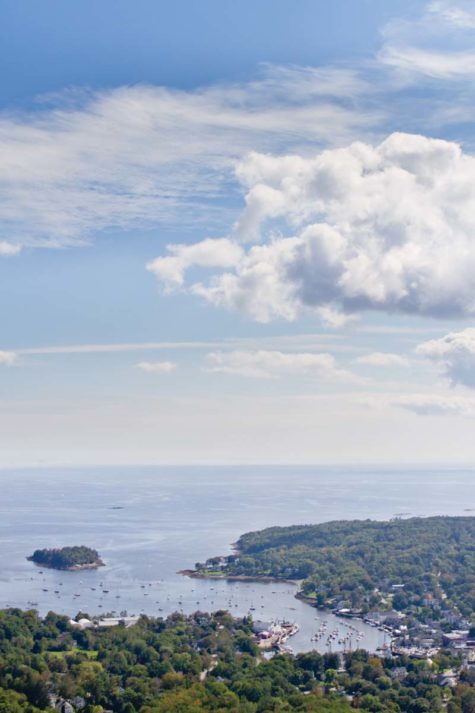 View of Camden from the top of Mt. Battie