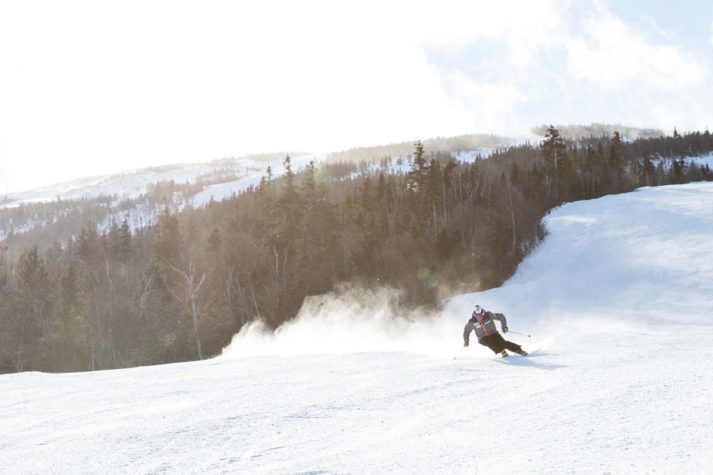 The proud East Coast skier has raced around the world and back again, and can confirm: there’s no place like Sugarloaf. “We know and care about each other here,” he says. 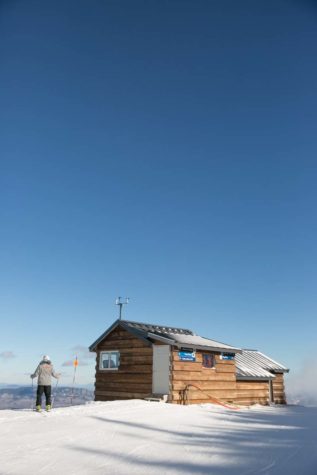 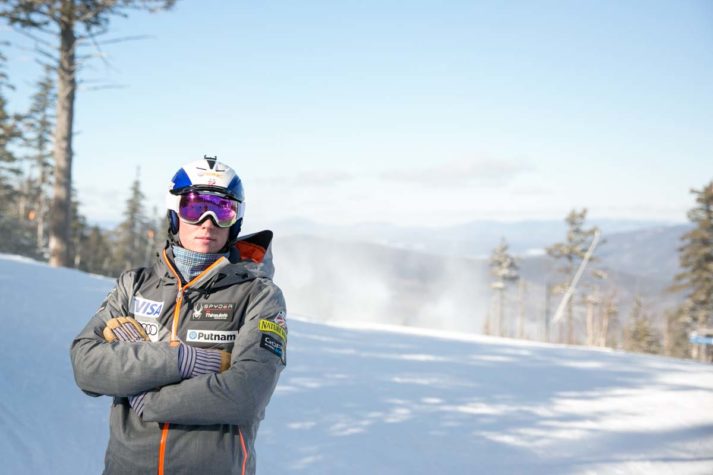 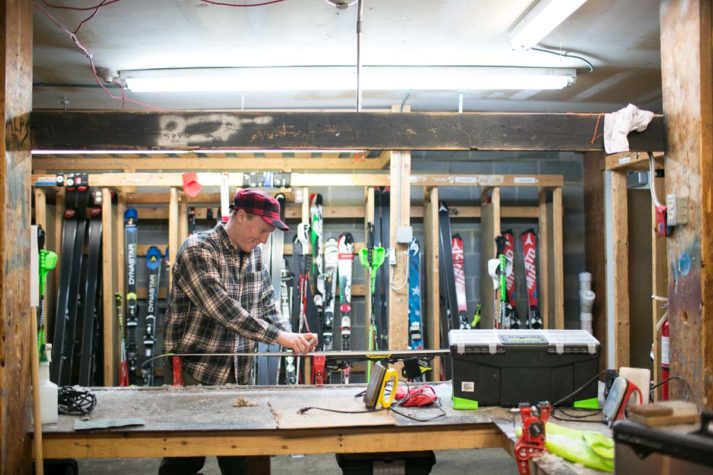 Sam Morse Brings Home with Him

Bolstered by family and his Carrabassett Valley Community, this ski racer is reaching new athletic peaks.

Sam Morse spent the month of January in Germany, Austria, France, Italy, Switzerland, and on New York’s Whiteface Mountain. In the coming weeks he’ll ski the American West, then jet to Sochi, Russia, for the U.S. World Cup, and back to Aspen, Colorado, again. As temperatures warm he’ll ski the glaciers of the Cascades, and when summer comes to the northern hemisphere he’ll head south in search of winter. But for now, on February 2, he’s home in “the Valley,” spending a short and cherished stint at the ski resort he loves best of all: Sugarloaf.

By the time we talk in the early afternoon, he’s already had his car inspected, “put some new parts in her,” and sat for another interview. “Then my dad was like, ‘The Special Olympics are going on, you should see how you can help,’” says Morse. (I gather over the course of the afternoon that you should see how you can help is a familiar refrain in the Morse household.) Without missing a beat, he jogged over to the Beach in time to lead the athletes of the 2016 Winter Special Olympic Games in the Athlete’s Oath: “Let me win, but if I cannot win, let me be brave in the attempt.”

Mild fanfare aside, for Morse this has been a low-key day. But in his father’s mountainside home supply and interior store, Birchwood Interiors, he doesn’t exactly look relaxed. He’s genuine, gregarious, and generous with his time, but he sits on the edge of the couch, a red-headed, 200-pound, six-foot-tall bundle of potential energy ready to realize its kinetic destiny. Ready, as always, to ski. Fast. Like, 80 miles per hour. Down walls of icy snow. There’s skiing as I know it, and then there’s what Sam Morse does.

How the heck does one learn to ski better and faster than just about everyone in the world? Morse breaks it down into two parts: “There’s skill, and then there’s your ability to race, to just throw it down the hill and go fast.” He credits his father, Earle Morse, with laying the technical groundwork. “My dad understood that people who start skiing really young have a natural ability on skis that you can’t teach later,” says Morse. Pamela Morse, co-pastor (with Earle Morse) at the Sugarloaf Area Christian Ministry, is the competitive one. “I totally could have grown up in the Valley and loved to ski, but not have been willing to put in the time to be the best that I can be. My mom definitely instilled in me this sense of, ‘If you want to do this, do it,’” says Morse. And so he did.

In addition to becoming U.S. Ski Team athletes, both Morse and his older brother, Ben (who retired from the team in 2014), graduated valedictorian of their respective classes at Carrabassett Valley Academy (CVA). It’s a testament to the school and the Sugarloaf community at large that the Morse boys’ academic accomplishments and integrity earn them as many kudos as their medals. “We wanted to make sure the kids realized that it’s something you love to do, ski racing, but it’s not your total identity,” Earle Morse says. As for the role his brother has played in Sam Morse’s success? Mention Ben and I bet you ten bucks Sam smiles. “I wouldn’t be where I am today if it wasn’t for my brother paving the way. I look up to him so much,” says Morse, cutting the sincerity with a brotherly dig about the Dartmouth graduate’s relatively staid life in Boston..

Following in his brother’s ski tracks, Morse had lots of success in regional races as a boy. But in 2011, his career took a turn when he came in third overall at the Whistler Cup, an international race held in British Columbia that proved he could be a big fish in a big pond. By then he was already on track to graduate from CVA early and dedicate himself to the goal of getting on the U.S. Ski Team. That year, 2014, he soared through the International Ski Federation (FIS) race circuit to become the best downhiller in the country in his age group, winning him the Golden Ski Award for the top junior skier in the East, a spot on the U.S. Ski Team, and comparisons to Olympic gold medalist and CVA alum Bode Miller. “To even be written in the same sentence as Bode is pretty sweet,” says Morse. “But no one is going to replace anyone else. You make your own legacy.”

Later that afternoon, out on the slopes, Morse’s earlier comments about Sugarloaf take on new meaning. “Skiing around here you see so many people you know,” he says. “You go to other resorts and they’re buzzing. It’s exciting, there’s a lot going on, but you can tell that people don’t know each other.” Whereas back in the Valley, in his U.S. Ski Team jacket,

Morse is bombarded with hellos, handshakes, and hugs, so that it’s a wonder he gets any skiing in. But he does, and after the rush of slicing through the snow on skis for a couple of hours—and seeing people he grew up with on the mountain— the light in his eyes grows brighter.

When we join Pamela Morse at the church, Sam is even friendlier than before. With red cheeks, mussed-up hair, and twinkling eyes, he makes me tea and we pass a bag of pretzels back and forth. Tired of talking about himself, he prompts his mother to tell me about her graduate school work, and listens intently when she does. That’s when I realize how rarely this world traveler spends a winter afternoon in the church with his mother these days, and what a gift it is to share this moment with them. I leave reluctantly when it’s time to go—theirs is the kind of family you feel lucky tobeapartofforafewhours.

I keep tabs on Morse throughout the year. He’s awarded first place in downhill at the Europa Cup junior podium in Wengen, Switzerland, gets four top-ten finishes at the NorAm Cup, and has an incredible showing at the World Junior Championships, coming in fourth place in downhill and making the move from the D Team to the C Team—marking another huge step in his career. On Instagram he posts photographs from Switzerland’s Matterhorn glacier, the Ohau Snow Fields of New Zealand, and the summit of Sugarloaf mid-hike, during a nine-hour stopover at home before making his way to Hanover, New Hampshire, to begin his first quarter at Dartmouth College. After ten weeks of calculus and “The Religions of China” it’s back to chasing winter and wins with his fellow Ski Team athletes. When I ask him how he does it all, he reminds me: “I’m more natural on skis than I am walking. I click into skis, and I’m like, alright, I’m home.”

Read more from our Sugarloaf Issue! 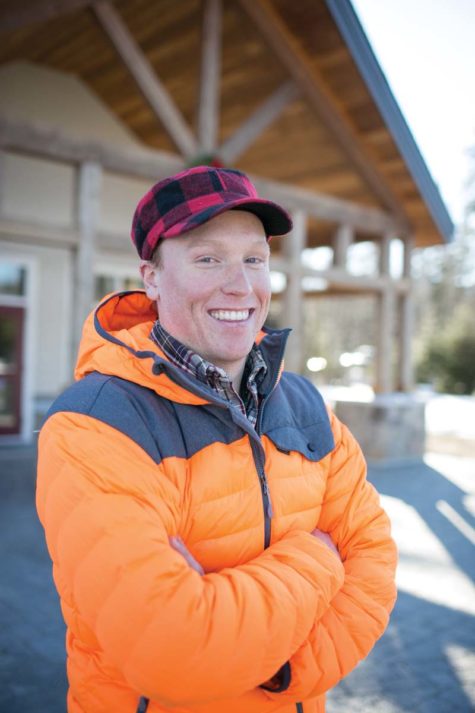 The Carrabassett Valley native is rarely home these days, but when he is he makes the most of it on the mountain, skiing with friends and family. 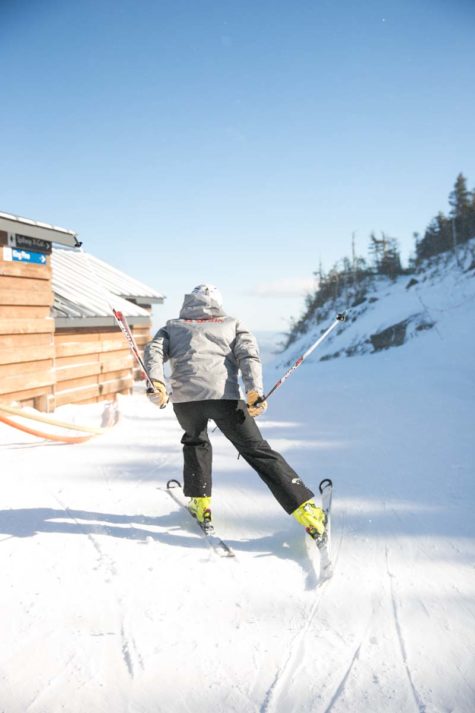 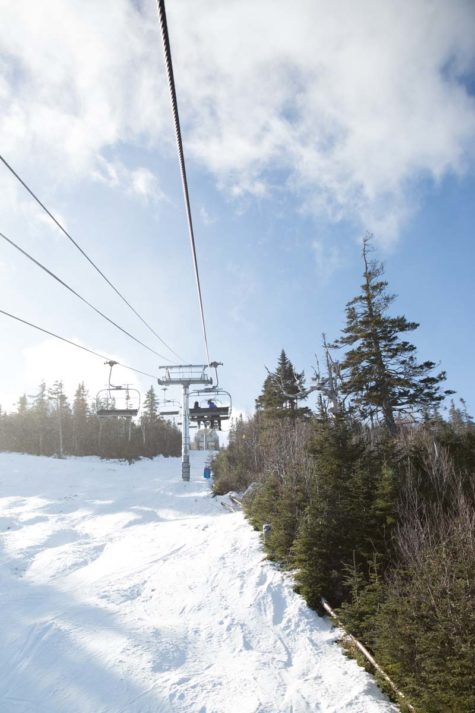