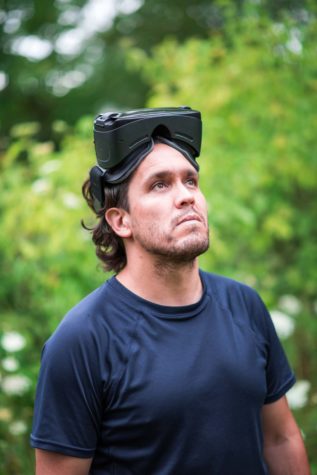 When Daniel Quintanilla tells a story, his audience isn’t on the outside looking in. They are fully immersed. For the filmmaker’s latest project, At the Periphery, the sense of being in someone else’s shoes is especially important. This virtual reality film exposes viewers to the daily experiences of immigrants living in Maine.

At the Periphery is named for the feeling  many immigrants have, as if they are nearly  invisible to other Americans. It is part of  the exhibition Making Migration Visible:  Traces, Tracks, and Pathways, which  will run from October 5 to December 14  at the Maine College of Art’s Institute of  Contemporary Art in Portland. Over 40  artists and organizations are contributing to the exhibition, which features artwork accompanied by a series of events, including lectures, films, performances, and community conversations. All of the events and art installations focus on themes of immigration, migration, and border crossing.

Quintanilla, who’s based in Rockland, is the creator of A Shared Space, a collection of virtual reality videos focusing on minority communities in Maine. The 360-degree videos require the participant to wear a headset through which they can see and hear everything in the scene around them. “To me it’s a different type of storytelling,” Quintanilla says. “It’s sensory. I wanted to explore what it’d be like to bring people to spaces they normally wouldn’t go to.” In his project for the exhibition, viewers experience three different spaces occupied by immigrants: a community farm started by the Somali community in Lewiston, a Mexican take-out restaurant in Milbridge, and a blueberry camp also in the downeast region. Filming took three days, and post-production took almost a month.

In the video, participants hear people talking, but when they turn toward the voices, no one is there. “It’s about being alone in that space,” Quintanilla says. “You’ll just hear a soundscape of people and activity.” The experience is supposed to represent how alone immigrants often feel in a new country. Quintanilla, who was born in Mexico and moved to the United States when he was 12, says he hopes the project will help others empathize with immigrants and be more open. “It’s an invitation to step into a different experience.” 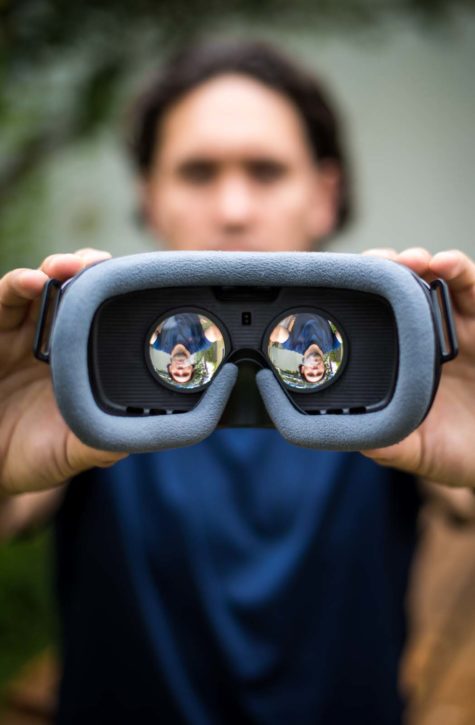