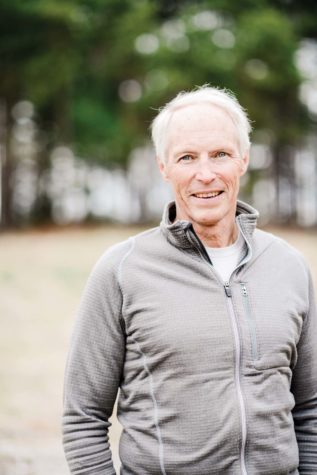 As a doctor in the Emergency Department at Maine Medical Center, Tony Owens has often observed firsthand the connection between conservation and human health, and as an environmental advocate, he has worked to create stronger conservation policies and inspire the next generation of leaders. In front of a United States Senate committee in Washington, D.C., he testified in support of the Environmental Protection Agency’s Clean Power Plan, arguing that carbon dioxide emissions from Midwestern power plants contribute to Maine’s high rates of pediatric asthma. Speaking out about climate change, he has suggested that higher temperatures have expanded the range of tick-borne diseases and caused higher incidences of Lyme disease. In 2007, Owens joined the board of the Natural Resources Council of Maine (NRCM) after his fourth child graduated from college. He was instrumental in the development of NRCM Rising, a subgroup of NRCM that seeks to expand advocacy among people under 40. As a practicing emergency physician for nearly 40 years and an associate professor at Tufts University School of Medicine, he also teaches residents and medical students in the Emergency Department at Maine Medical Center. Leading by example, Owens says, “I’m constantly challenging young people to become more engaged. These people will live much longer than me, and I want to teach them to become better stewards and advocates.”