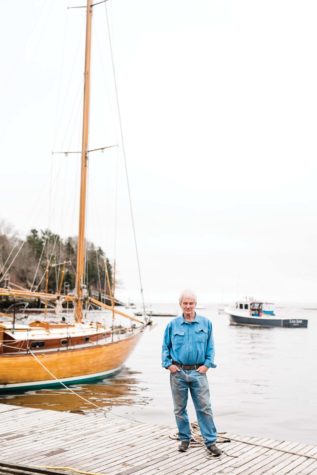 Taylor Allen got his start building boats as a teenager at Rockport Marine, which his father founded in 1962. After college, he returned to Maine and eventually became president of the boatyard, which specializes in designing, building, and restoring wooden yachts. The company now employs around 50 people and is largely run by Allen’s stepson, Sam Temple. While at the helm of the company, Allen shifted its work toward new construction and restoration, as well as increasing winter storage capacity. In 2011 Allen helped open Front Street Boatyard in Belfast with three other well-known boatbuilders: JB Turner, now president of Front Street Boatyard; Steve White, owner of Brooklin Boat Yard; and Kenneth Priest II, former CEO of Kenway Corp. The shipyard, which employs around 100, has brought new energy to Belfast’s waterfront. It began construction this year on a new facility that will allow it to work on larger vessels and add 40 more jobs. Allen says the growth at Front Street Boatyard furthers Maine’s reputation as a quality place to keep boats and have boats repaired. “I grew up here. It’s my home and turned out to be a great place to do work,” he says. “The state of Maine is known for high-quality boatbuilding and motivated, hard-working employees who dedicated to delivering the best product and value for our customers.”