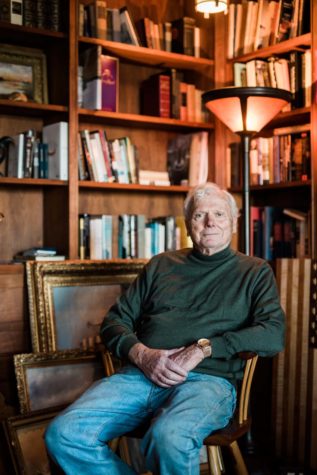 Before Tom Moser pursued wood-working full time, he was teaching speech and communications at Bates College. He and his wife, Mary, had been refinishing and selling antique furniture from their home workshop when he took a year-long sabbatical to see if he could make it as a craftsman, risking the economic security he had as a tenured professor. “I was going to be either a fool or successful, and I guess it turns out I was successful,” Moser says. His eponymous furniture company (although he’s fond of saying that he’s just Tom—the brand is Thomas Moser) has since made chairs for presidents and popes and has outfitted homes and institutions all over the world. “What we create has universality that transcends time and space,” Moser says. “If it’s good in Brunswick, Maine, it ought to also be good in some place in India.” The company’s Auburn workshop employs more than 60 craftspeople, and there are showrooms in Freeport, Boston, New York, Washington D.C., Philadelphia, and San Francisco. Although the company’s pieces are considered heirloom-quality, Moser is emphatic that they are not art. “Art doesn’t require function,” he says. “Craft does.” Still, he sees the company as providing something with more significance than just places to sit. “It takes an American hardwood tree 75 to 125 years to mature and provide what we call lumber,” Moser says. “Whatever we do with that tree should provide meaning and support and utility for at least as long as it took for the tree to grow.”