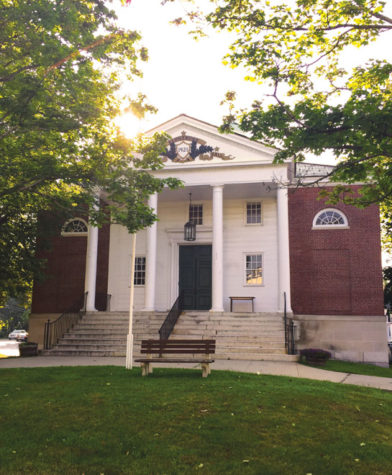 On a winter night in Portland, Charles Dickens read A Christmas Carol to a crowd at Portland’s city hall. In Blue Hill, the community lined up in the evenings to watch shows in the upstairs of the town hall. At Davenport Memorial City Hall, the bell rung on only certain occasions is believed to be cast be Paul Revere. Town and city halls have always been hosts to community gatherings, Town Meetings, and elections, and here in Maine, many have been the sights of local history.

On the first floor of Blue Hill’s Town Hall are municipal offices and space for weekly meetings. However, aside from hosting previous Town Meetings and present-day elections, the upstairs has been a space for entertainment. In the mid-twentieth century, movies were played in the auditorium, and today it’s where the New Surry Theatre and Performing Arts Center puts on shows. The white building on Union Street was designed by George Clough and built in 1895.

The bell that hangs in the tower of the Davenport Memorial City Hall in Bath is two hundred years old and said to be cast by Paul Revere. The town rings the bell on special occasions. The city hall was built with donations from George Davenport, who in his will left the town $10,000 for a hall to be built in honor of his father, Charles Davenport, who was president of Bath Savings Institution and one of the first aldermen in Bath. The city hall built with granite from the Hallowell quarries and designed by Charles G. Loring of Boston was completed in 1929.

Lewiston’s city hall is a grand red brick structure on the corner of Pine and Park Streets. The first city hall was even larger; it was built for the growing, newly incorporated city in 1872 with 80 rooms and even included the prison in the basement. Eighteen years later the building burned down after a fire broke out in an elevator. The present-day building was dedicated in 1892.

Hallowell’s city hall is a yellow brick and granite building on Winthrop Street, just a short distance from the stores of Water Street and the rushing Kennebec River. Today the small town is just six square miles, but in the early nineteenth century Hallowell was 90 square miles and included towns such as Augusta, Chelsea, and Farmingdale. Due to its size, in 1853 the town was incorporated as a city and the town hall built in 1828 became the city hall. The present-day city hall building was completed in 1899. Inside the building today are the offices of the town officials, and in the basement are kept historical documents that date back to 1771.

Portland’s large, granite gray city hall stands guard at the top of the Old Port. The original city hall burned down in 1866 in the Portland fire that destroyed 1,500 buildings and displaced 10,000 residents. At the second city hall on March 30, 1868, Charles Dickens stood before a crowd of over 1,000 to read A Christmas Carol. Then in 1908, the building burned down again. In 1912 the third large granite structure that we see today was completed by New York architectural firm Carrere and Hastings and local father-and- son team John Calvin Stevens and John Howard Stevens.

In front of the red brick city hall of Belfast are two canons and a monument dedicated to the soldiers of the Civil War. The city on Penobscot Bay, named for the city in Northern Ireland, was immersed in the military history of the United States. The British military burned the city in 1779, and in the War of 1812 the British occupied the small maritime city. In 1890, members of the Grand Army of the Republic built the city hall and dedicated it to Colonel Thomas Marshall, who was originally from Belfast, studied at Bowdoin College, and fought in the Civil War.

Stonington is a 37-square-mile island town that stretches into Penobscot Bay. The town was named for its gray and pink granite quarries. Today it has a population of just over 1,000, and the town hall reflects its quaint charm. The white three-story building with mansard roofing was originally a schoolhouse that was built in the late nineteenth century when Stonington split off from Deer Isle. In the 1940s the building in the middle of town on Main Street began to be used for town offices.

In the center of town in Upper Square is the Kennebunk Town Hall, an iconic Colonial- Revival building that the town has much affection for. The hall was built in 1920. Some commercial buildings, such as a blacksmith shop and the old firehouse, were taken down to make room for the new municipal gathering place. William Barry, a historical preservationist, naturalist, and architect, designed the building on Summer Street. Today the town hall is home to municipal offices and the fire station, and hosts events, recitals, and concerts throughout the year in the auditorium.