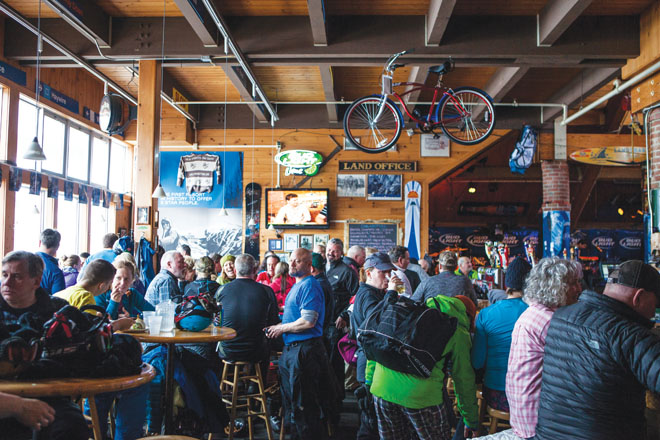 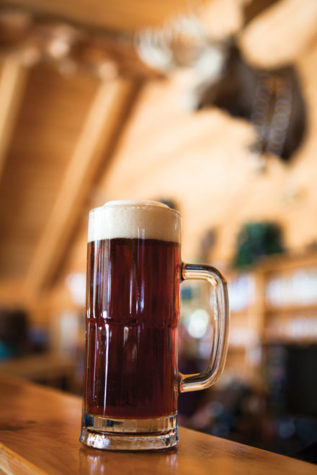 Chase McKendry doesnt know the exact hours for après-ski at the Rack, the restaurant he co-owns with Jeff Strunk and Seth Wescott. It goes all night, he says. Its also about the attitude more than it is about the deals. McKendry would knowthe Rack was voted No. 1 après-ski bar in the country by Outside magazine. Were Sugarloafs living room. Everyone comes here to just hang out, he says. There has never been a ski bar up herewhen you look at what a true ski bar isand we are able to fill that niche. McKendry says part of the charm comes from the authenticity of the establishmentfrom the eclectic mix of storied items stowed in corners, from ski signs and stickers to old gondolas, to the three owners who all have deeps roots in Carrabassett Valley. We know 90 percent of our customers, he says. The restaurants dishwasher, James Sturzenberger, is also an artist who creates installations out of bottle caps and other recycled products, which the mountain community saves for him. One of his works features a portrait of Jack Nicholson from The Shining. This winter Sturzenberger will create new installations out of season passes and other items.

Located in the heart of the Sugarloaf Mountain Hotel, 45 North offers fine dining in a rustic setting. The menu, produced by chef Ryan Ward, is locally sourced, including Pineland Farms braised short ribs and grilled pork chops enriched with a Carrabassett coffee rub. After laying tracks on Sugarloaf s 163 trails and glades, many skiers return to base in the afternoon, specifically from 3 to 5 p.m., when theres dollar-off house wines and draft beers. On Saturdays the restaurant has live acoustic entertainment and fireplaces are lit around the room, creating a cozy and intimate experience.

03 The Widowmaker Lounge and the Beach

From the high-top tables of the Widowmaker Lounge panoramic views of Sugarloaf Mountain loom large, and during the traditional après-ski hours, its hard to find a stool. Throughout the winter the sun sets behind the mountain and pinks and oranges streak the sky. Meanwhile, in the post-slopes hours, the Widowmakers party scene is booming. Every weekend bands play, and the bar, which has pool tables and videos inside and a deck outside, is a central spot for events like Reggaefest and College Snowfest. The pubs menu is meant for sharing, especially the nachos, served in a 14-inch- round, two-inch-deep pan filled with tortilla chips covered in onions, peppers, tomatoes, jalapenos, and cheese. When the weather warms up (to the 50s and 60s), the Beach opens up in front of the Widowmaker and an outdoor bar allows après-ski-goers to enjoy a cold beer with mittens at the base of the base of the mountain.

In Village West, just below the SuperQuad lift, is Gepettosa restaurant that enjoys a longstanding relationship with the mountain. D.L. Geary Brewing Company produces Out of Bounds Ale (affectionately called OOB) specifically for Gepettos. Downstairs is an arcade for kids, and upstairs the bar is always full in the après hours. When they get off the hill, people want to sit around and chat with friends whom they have been skiing with or maybe havent seen all day, says manager Jenny Needham. The rotating martini list inspires returning customers, and hot chocolate and coffee-based drinks warm up hands (and bellies) after a day on the slopes.

05 The Bag and Kettle

The Bag has a real local following. We have had the same faces day-in and day-out for 35-plus years, says co-owner Pat Mulligan. And even if you dont know everyone, within five or ten minutes, youll know a few people. During après, the Bag has specialty appetizers that rotate daily and pair well with the house beers brewed on the premises. Beers include brown ale, pale ale, raspberry ale, winter ale, and potato ale. The bar purveys a high-end whiskey, scotch, and bourbon bar that one might want to enjoy by the famous green light. Its at eye level, and it pisses everyone off, says Mulligan. The lamp actually has a Facebook page of its own and no one knows who runs it. Other well-known items include brick-oven pizza and the famous oversized Bag Burger served with top-secret Bag sauce; still, it seems the authenticity of the establishment is what keeps it busy daily. The Bag is just about friends and camaraderie. Everyone who comes in is there to connect, says Mulligan.