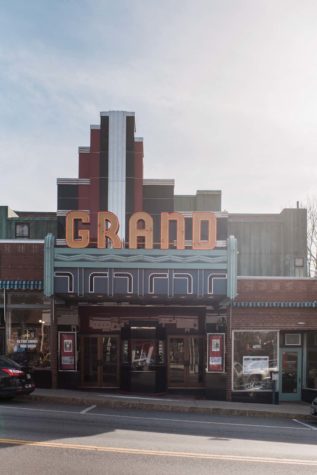 With new shows every season and talent ranging from budding thespians to experienced performers, these historic community theaters are raising the curtain on Maine’s performing arts.

Waterville Opera House | Waterville
Since 1902 the Waterville Opera House has been central Maine’s hub for the performing arts. Inside the historic Colonial-style building is seating for over 800 people, stone stringcourses, and original Baroque plasterwork. Each year the opera house puts on five main-stage produc- tions (two musicals and three plays), children’s theater camps, and educational performances for local schools.

The Chocolate Church Arts Center | Bath
This nineteenth-century Gothic Revival church is now a community theater and arts center complete with a large stage and tiered seating for over 200 audience members. The Chocolate Church hosts concert series, community plays, and other live acts such as vaudeville and variety shows. An art gallery attached to the theater is open during intermissions to showcase the work of local artists.

The Portland Players | South Portland
The Portland Players, which is the oldest community theater in Maine, is a destination for local theater in southern Maine. As part of a commitment to making performances accessible to all, the second matinee of every production is translated in American Sign Language, and an annual scholarship is awarded to students pursuing a college education in the fine arts.

The Barn Arts Collective | Bass Harbor
From puppetry and mime shows to classical theater and opera, the Barn Arts Collective is home to a unique theater experience. Barn Arts offers free residencies to individuals or groups of artists looking to create new work. Starting this year, the visiting artists will partner with local organizations to connect with community members through creative and educational programs. The Barn also engages with the Mount Desert Island community through public conversations to help develop new musicals and dramas for kids on the island.

The Grand | Ellsworth
Once a movie theater, then a boxing ring, The Grand is now a popular community theater with a long list of events throughout the year. The Grand, which is listed on the National Register of Historic Places, puts on theater productions and presents broadcasts from the New York Metropolitan Opera, concerts, films, and comedy shows. In the summer months the theater has a Performing Arts for Children series that introduces area children to a vari- ety of live performances.

Lakewood Theater | Madison
Before it was turned into a summer theater near the turn of the twentieth century, the Lakewood Theater area was an amusement park on the shore of Wesserunsett Lake. It is now one of Maine’s oldest summer theaters, dating back to its first production in 1901. Each season runs from May to September and includes local performers. Some of the performing artists who have graced the Lakewood stage have gone on to fame, including John Travolta, whose signature still remains on a wall backstage.

City Theater | Biddeford
City Theater, a year-round volunteer-based community theater, has been a cultural hub in York County since the early nineteenth century. Along with five main-stage performances, it hosts concerts, movies, and shows during Biddeford’s annual WinterFest. The historic build- ing features a Colonial-style balcony that looks out to the traditional red curtain that hangs on the stage.

Hackmatack Playhouse | Berwick
Located on the former Guptill family farmstead, this community theater’s campus includes a barn that houses the stage and 218 seats, a woodshed used for rehearsals, and an adjacent mill house where set pieces are made and costumes are stored. Each summer season consists of four main-stage shows and two theater camp performances.