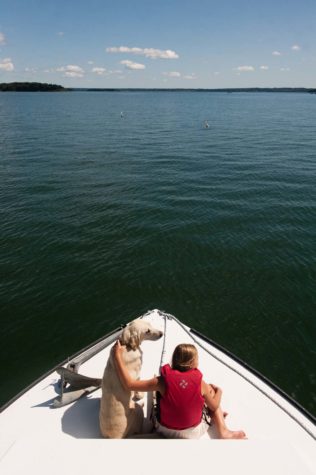 For the best Maine vistas, leave the crowds behind and climb on board a private boat. Curated with the help of Captain Jack Stewart of Yarmouth Boatyard, here are our top picks for seaward excursions.

Drop anchor in this tidal cove and spend the afternoon watching wildlife like blue herons and eider ducks. On the southeastern side, the Nature Conservancy owns the Basin Preserve, a 1,900-acre protected forest that includes ten miles of public trails.

On the northern edge of Vinalhaven, Carver Cove is a large, eastern-facing inlet. Stay the night and wake up in time to catch the sunrise over the Atlantic.

Originally discovered by the Abenaki and later settled by European commercial fishermen
in the early 1600s, Damariscove Island is rich in history. Now mostly uninhabited, the cove offers moorings where you can leave your boat for the day.

Although the Casco Bay Lines ferry runs from Portland to Cliff Island, it’s most convenient to arrive by private boat. The island’s roads are unpaved, and residents often use golf carts as transportation.

West Gosling, East Gosling, and Irony make up the three islands of the Goslings. For the fastest trip, depart from Mere Point Public Launch in Brunswick and land on the northwestern shores of West or East Gosling, the larger of the islands.

Shaped thousands of years ago by glaciers, Somes Sound cuts through the lower half of Mount Desert Island from south to north and provides natural protection from harsh winds. Bear Island Lighthouse guards the sound’s entrance to the south.