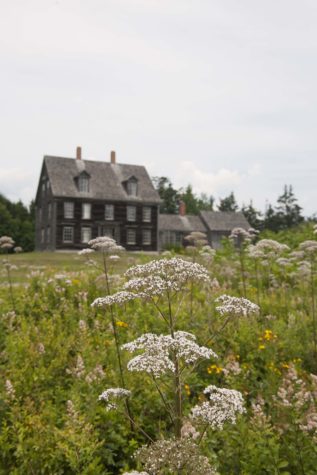 Maine is filled with historic gems that are open to the public for exploring. Nineteenth-century mansions to coastal forts and antique schooners—our state has something to catch every history buff’s eye.

For the past seven years, Portland Fire Engine Company has held history and sightseeing tours from inside a vintage red fire engine. The tours are led by local guides and run for 50 minutes. The truck holds up to 13 people, allowing for an intimate ride past Portland’s lighthouses, historical buildings, and cobblestone streets. During the tour, a guide displays old photographs of Portland’s landmarks from the Maine Historical Society.

Maine’s oldest living history museum was once home to the Washburns, a prominent political family of the nineteenth century. Located on 445 acres of working farmland, the estate encompasses a Victorian-style mansion, a farmer’s cottage, a meetinghouse, and a one-room schoolhouse. Interpreters who work at the living museum dress in nineteenth-century clothing and encourage visitors to join them as they act out a typical farm day from the early 1800s.

Located on the shores of the Pemaquid River, the Colonial Pemaquid State Historic Site includes Fort William Henry, a replica of a 1692 fort of the same name built in 1907 for Colonial Pemaquid’s 300th anniversary. Visitors can explore the stone fort and climb to the top of its 29-foot bastion, which overlooks a burial ground from the early 1700s, a small village, and a memorial to the Angel Gabriel, a 240-ton ship that brought settlers to New England from England and was wrecked by a storm in 1635.

Off a dirt road in Cushing sits a nondescript colonial farmhouse that is the setting of several of Andrew Wyeth’s paintings, including his most famous, Christina’s World. The eighteenth-century home once belonged to Christina and Alvaro Olson and is now owned by the Farnsworth Museum and open to the public during the summer months for guided tours. While little furniture remains inside the home, visitors can walk through the weathered building and imagine what it was like when Wyeth was painting there many years ago.

This Greek Revival home sits on a 180-acre estate built in 1824 by Colonel John Black. Inside the main brick house, also known as the Black House, are original furnishings and possessions, including portraits of three generations of the Black family, sleighs, china, and books. Visitors can tour the house, enjoy afternoon tea in the gardens, play croquet, or walk along the Woodlawn trails, which were first used to exercise the Black family’s horses.

High on a hill in Wiscasset sits Castle Tucker, a Victorian-style a successful sea captain, is now a museum offering a look into Maine life during the turn of the twentieth century. Visitors can walk through the downstairs parlor to view an original rococo-revival furniture set, find an original Empire Crawford stove in the kitchen, and look out on the Sheepscot River and Wiscasset village through two-story-high windows on the upper floor.

General Henry Knox named his mansion after a city in France as a way to honor that country’s support during the Revolutionary War. Montpelier, which is part of the General Henry Knox Museum, is open for the public to explore. Its ten acres of colonial gardens and 19 rooms make up what was once the grandest residence in Thomaston. Docents of the mansion lead tours and teach guests about the life of General Knox and his family, who farmed on the property.

This nineteenth-century schooner, launched in Christmas Cove in 1871, is the oldest surviving two-masted schooner in the United States and the oldest Maine-built sailing vessel. Passengers looking to board the historic tall ship can choose from one- to six-night charter trips, where they stay in single or double cabins located in what used to be the cargo hold. The ship became a National Historic Landmark in 1992.