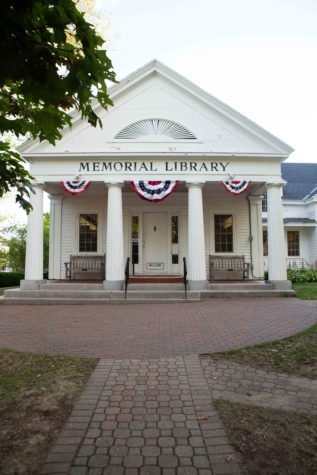 Back-to-school season means it’s time to hit the books. With beautiful architecture and an array of interesting events, Maine’s many libraries offer room to learn and have fun.

Built in the 1840s as a Greek Revival temple-style home originally, this library is located in downtown Boothbay Harbor. If you’re without a library card, head to the library’s adjacent used bookstore to take some reads home.

Following a massive renovation in 2014, this brick library in the heart of Yarmouth’s downtown has a historic feel with modern touches. The space serves as a community hub with lectures and workshops and also plays host to the Merrill Film Society.

With more than three million books and print documents, the Raymond H. Fogler Library has no shortage of material to get lost in. Although it’s located on the University of Maine campus, the library is open to the public as well as students and faculty.

When the Blue Hill Public Library first opened in 1796, it occupied the corner of a grocery store where the grocer doubled as the librarian. A women’s group reopened the library in the 1860s after it had been closed for 20 years and relocated it in the town hall by 1895. The library continued to grow over the years and now is home to over 40,000 items.

With its fieldstone facade, arched wooden doorway, and tall tower, this 1897 library looks like a small castle. The inside is just as charming, and its fireplace makes it a cozy place to curl up with a book.

Located near downtown Bar Harbor, this library is a community hub that hosts book signings, concerts, and writers’ groups. In addition to lending books, the library, which has an astronomy club, also has a telescope patrons can borrow.

The Waterville Public Library won a National Medal for Museum and Library Science in 2017 for offering services beyond lending books and media. The library provides workshops on college applications and financial aid and offers weekly job-search labs