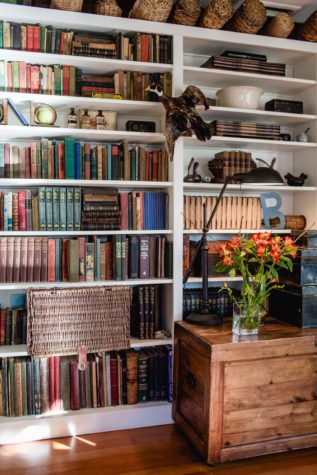 Maine is home to numerous award-winning authors, whose genres range from supernatural fiction to romantic suspense. While diverse in literary styles, these writers all hold one thing in common: a love for Maine.

Stephen King
As a student at University of Maine, Stephen King wrote a weekly column titled “The Garbage Truck” for The Maine Campus, the university’s student newspaper, and was known to arrive at the newsroom an hour before deadline to write a piece on his political reflections. King’s first novel, Carrie, was published in 1974 with a print run of 30,000. Since then, the King of Horror has authored nearly 60 novels and over 200 short stories.

Tess Gerritsen
Tess Gerritsen began writing while on maternity leave from her job as a physician. She published her debut novel in 1987 and first reached the New York Times Best Sellers list with her 1996 medical thriller Harvest, which is based on her experience as a doctor and inspired by a harrowing conversation she once had with a homicide detective. Gerritsen, who lives in Camden, has published more than two dozen novels, including 12 in her Rizzoli/Isles series, which inspired the TNT television show Rizzoli and Isles.

Bill Roorbach
Bill Roorbach began visiting Maine and teaching creative writing at the University of Farmington in the 1990s. When his daughter was born in 2000, he decided he wanted her to grow up in Maine, so he quit his job as a tenured professor at Ohio State University and moved to Maine to write full-time. His Maine Literary Award–winning nature memoir, Temple Stream, is based on the natural life along a stream behind his house in Farmington. His most recent book, a collection of stories titled The Girl of the Lake, was published in 2017.

Monica Wood
Monica Wood’s Maine Literary Award–winning 2012 memoir, When We Were the Kennedys, is a look into her vibrant childhood memories of growing up in Mexico, Maine, including her father’s sudden death and the political turmoil of President Kennedy’s assassination. Recently, Wood has been writing plays. Her newest full-length play, The Half-Light, will debut at Portland Stage Company in February.

Richard Russo
Richard Russo is an expert at telling stories about small-town America, often inspired by his experience growing up in upstate New York or his time in Maine, including his years as an English professor at Colby College. His novel Empire Falls won the 2002 Pulitzer Prize for Fiction and was adapted into an HBO mini- series. It is set in a fictional Maine town with an abandoned mill and follows a host of blue-collar characters struggling to get by.

Kate Christensen
After moving to Maine in 2011 from a farmhouse in New Hampshire, Kate Christensen wrote two culinary memoirs. Blue Plate Special is an autobiography chronicling her adolescent years, and How to Cook a Moose, which won a 2016 Maine Literary Award, celebrates her discovery of Maine food and the people behind it. She returned to novel writing (her first six books were novels) with The Last Cruise, published in 2018.

Michael Paterniti
For his book The Telling Room, Michael Paterniti, a writer for GQ and other magazines, temporarily moved to a small village in Spain to uncover the story behind a celebrated cheesemaker, Ambrosio Molinos de las Heras. The book dives into Spanish history, the craft of cheesemaking, and traditions in Guzmán, Spain. The Telling Room is also the name of a Portland-based nonprofit for youth writers that Paterniti cofounded with two other writers, Susan Conley and Sara Corbett, his wife.

Lily King
Lily King, one of Maine’s most successful writers, has lived in the state for 15 years. Her semi-biographical book, Father of the Rain, set in rural New England, touches on her fractured upbringing and her relationship with her father. It won both a New England Book Award and a Maine Literary Award. King is now a writer and board member at the Telling Room, Port- land’s writing and storytelling center for children.