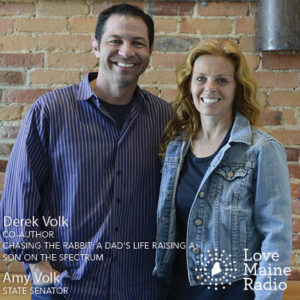 Amy Volk is the State Senator for District 30, which includes most of Buxton, most of Scarborough, and all of Gorham. Prior to being elected to the Senate, she served two terms in the Maine House as the Representative for House District 127, coastal Scarborough. Senator Volk resides in Scarborough with her husband, Derek, the President of Volk Packaging Corporation, a third-generation family business. They have four children.

Derek Volk is the author of the internationally acclaimed Amazon best seller, Chasing the Rabbit: A Dad’s Life Raising a Son on the Spectrum. Derek is a Maine businessman, supporter of Autism awareness, volunteer and philanthropist who, along with his family, was recently named the 2015 Spurwink “Humanitarian of the Year.”  He is currently the president and co-owner of Volk Packaging Corporation, a third generation, family owned, corrugated box manufacturer in Biddeford, Maine. Derek actively participates on the Maine Business Leadership Network (BLN), a national organization that focuses on connecting employers with potential employees who have disabilities. He resides in Scarborough with his wife, Amy and their four children.