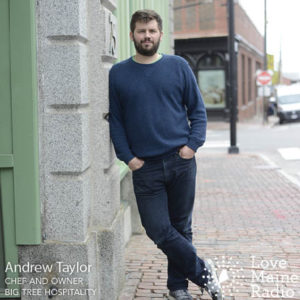 Growing up scavenging for wild oysters and mussels while vacationing on Cape Cod, Newton, Massachusetts, native Andrew Taylor had a passion for seafood and local ingredients at a young age. After graduating Bates College with a degree in economics, Andrew pondered law school but ultimately opted to pursue a culinary career. He sharpened his skills while working under renowned chefs Thierry Rautureau at Rover’s in Seattle and Ken Oringer at Clio in Boston. Andrew moved to Portland in 2009 and accepted a position at Hugo’s, a local mainstay known for elevated New England fare using the best of seasonal ingredients. Three years later, Andrew joined forces with colleagues Mike Wiley and Arlin Smith to purchase the restaurant from their mentor, then-owner Rob Evans, and founded Big Tree Hospitality. Since then, Big Tree Hospitality has opened Eventide Oyster Co. and the Honey Paw, with the purpose of delivering modern, innovative, and influential dining experiences. In 2017, Andrew and Mike won James Beard’s “Best Chef: Northeast” award. They were previously nominated in the same category in both 2014 and 2015. Today, Andrew guides the evolution of all of Big Tree Hospitality’s properties, in terms of culinary direction and overall growth of the brand.