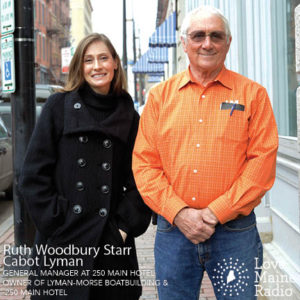 Cabot Lyman, owner of Lyman-Morse Boatbuilding, graduated from the University of Vermont in 1967. He moved to Maine in 1978 and started Lyman-Morse Boatbuilding in Thomaston. For three years, between 1987 and 1990, Cabot and his family circumnavigated the world in a 49’ sailboat built at Lyman-Morse. Along with his son Drew, he purchased Wayfarer Marine in Camden in 2016. Also in 2016, Cabot opened 250 Main Hotel, an upscale boutique hotel in Rockland.

Ruth Woodbury Starr, general manager at 250 Main Hotel, is a Maine native. Her first experience in hospitality began at the age of 16, when she learned housekeeping, front desk and banquet service at a large resort. She attended Proctor Academy and Hampshire College. After college she moved to Portland and worked at the Portland Harbor Hotel and Soma Wellness. In 2014, she returned to the midcoast, where she joined the team at Primo restaurant. In the spring of 2016, she joined Cabot Lyman for the opening of 250 Main Hotel.