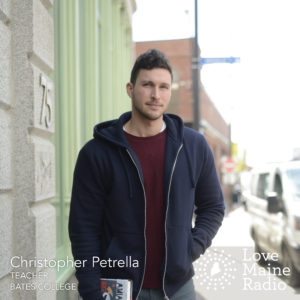 Christopher Petrella teaches at Bates College and explores questions at the intersection of race, criminality, and citizenship. He also serves as associate director of programs for the college’s Office of Equity and Diversity. Christopher’s work has been featured in The New York Times, Harper’s Magazine, Boston Review, and The New Yorker. His research has appeared on ESPN and NPR and has been debated in the U.S. House of Representatives. He blogs regularly for the African American Intellectual Historical Society and is completing his first book on the history of white supremacy in 20th-century New England. In addition, Christopher volunteers as a program coordinator for Colin Kaepernick’s Know Your Rights Camp for youth. He holds degrees from Bates College, Harvard University, and the University of California, Berkeley. Christopher and his partner, Martha, live in Portland.