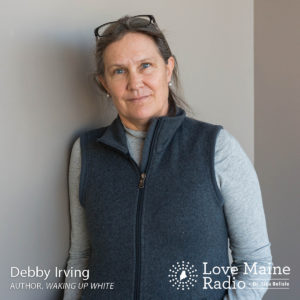 Debby Irving is a racial justice educator, author, and public speaker.  A community organizer and classroom teacher for 25 years, Debby Irving grappled with racial injustice without understanding racism as a systemic issue or her own whiteness as an obstacle to it. As general manager of Boston’s Dance Umbrella and First Night, and later as an elementary school teacher in Cambridge, Massachusetts, she struggled to make sense of racial tensions she could feel but could not explain. In 2009, Debby took a graduate school course, Racial and Cultural Identities, which gave her the answers she’d been looking for and launched her on a journey of discovery. Now, speaking and leading workshops around the country, Debby devotes herself to exploring the impact white skin can have on perception, problem solving, and creating culturally inclusive communities. A graduate of the Winsor School in Boston, she holds a BA from Kenyon College and an MBA from Simmons College. Her first book, Waking Up White, tells the story of how she went from well-meaning to well-doing.