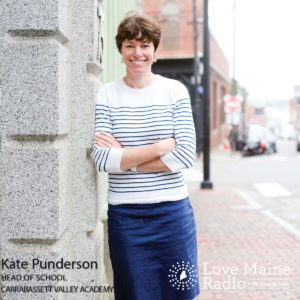 Kate Punderson is the head of school at Carrabassett Valley Academy, a private middle/high school at Sugarloaf Mountain. Punderson is a Carrabassett Valley native and a Carrabassett Valley Academy (CVA) graduate.  As an athlete, her ski career took her to NCAA Division 1 racing, and she later held several coaching positions, including as assistant alpine ski team coach at Middlebury College, where she received her undergraduate degree in environmental studies, and as head women’s alpine coach at Killington Mountain School. After completing her undergraduate degree and a master’s in education from the University of Vermont, she returned to her hometown and alma mater, where she founded and coached the CVA backcountry program and held several positions within the school’s administration team in finance and development. She ultimately became head of school in 2011. Currently she lives in Carrabassett Valley with her husband, Sam, and son, Calvin.