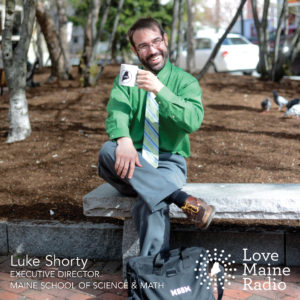 Luke Shorty is the executive director of the Maine School of Science and Mathematics (MSSM) and a 1998 graduate from MSSM. Originally from Fairfield, Maine, he returned to teach and eventually lead MSSM after getting his bachelor and master’s in mathematical sciences at University of Maine Farmington and Montana State University, respectively. Under his six years of leadership the school’s population has increased by 1.5 times, both its academic and summer programs have been expanded, and it’s begun distance education outreach for middle schools through a grant with the Jack Kent Cooke Foundation. U.S. News and World Report recently ranked the school as the 10th-best high school in the nation for science, math, engineering, and technology and 19th-best overall high school.